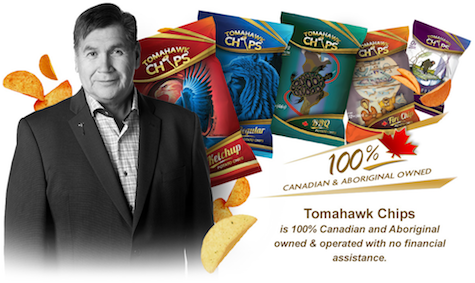 When consumers look for a quick snack, they want something that will not only conquer their hunger, but also provide them with a great, satisfying flavor. Native Canadian Chip Corp. has mastered that with its products, owner Alfred Lea says.

“The taste is what keeps people coming back at the end of the day,” he says, adding that the Riverton, Manitoba-based company uses refined spices to get its unique flavors. “You can buy cheaper spices … but it’s better to get a cleaner taste.”

A member of the Fisher River First Nations from Manitoba, Lea founded the company in 2015. Previously, he had worked for multiple businesses, which included inventing the Big Boggans sled for Equinox Industries Inc.

After helping other people get their products off the ground, he decided it was time to do that for himself. “There’s nothing you can’t do,” he asserts. “If you put your mind to it, you can do it; it’s all about focus and a lot of work.”

That work has paid off for Lea. Today, Native Canadian Chip Corporation has four varieties of products that are sold in convenience stores in Canada and the United States under the Tomahawk Chips brand: regular, ketchup, BBQ and fire chip flavors. 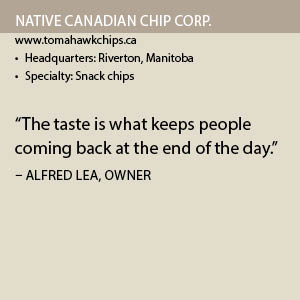 The Tomahawk products are sold in 1.52-ounce bags that feature work by First Nations artists on their exteriors. Although many competitors sell products that do not feature a cultural connection, “Mine has a lot of culture,” he says.

The bags also reflect the fact that the company and Tomahawk Chips are Aboriginal owned and financially independent of funding from any government source. “A lot of people will tell their children, ‘If this guy can do it, you can,’” Lea says. “It shows them what hard work can do.”

Lea not only focuses on inspiring young people through his products but also through community work. Today, he serves as the President of the Riverton & District Friendship Centre, which works closely with community organizations and government departments.

The goal of the Centre is providing communities with services that enhance the quality of life. Lea notes that these can range from food banks to housing to employment. “We also plan celebrations for the community that we’re in,” he says.

But its most important mission, he notes, is opening doors for young people and showing them how they can succeed in business. “Kids are smart,” Lea says, noting that Tomahawk Chips set up the Tomahawk Store, an e-commerce site for youths to operate.

Through the initiative, the young people approach different businesses about products to sell on the site. They also perform bookkeeping for the Tomahawk Store, which has given valuable experience to youths ages 13 to 26, he says.

“They come through the Friendship Centre, learn these skills and they go off to higher education,” Lea says, adding that this also has a positive impact by boosting commerce and creating good relationships with the surrounding businesses, such as Evergreen Basic Needs, Riverton Parks and Recreation, Winnipeg Harvest, Pine Dock Community Council, Riverton Motor Inn, Riverton Senior Centre, and many more in the Interlake and Southeast Regions of Manitoba.

“We want to be the website where the youth can make money for the Friendship Centre,” he says. “Different businesses also will come to our Centre and speak to our youth to let them know this is what it takes to become an entrepreneur and the challenges you’re going to face.”

It also provides young people with experiences in networking. “We have to open doors for them so they know what to do,” Lea says. “As elders, we have that network that we can pass onto the youth.”

For Lea, Native Canadian Chip is largely a one-man operation, but he also sources out portions of the business. “It’s a lot cheaper to go to businesses that need to diversify,” he says.

“I rent space from Quick Transfer and Ranger Mayflower I utilize them to haul my product to different distribution centers and so forth,” Lea continues, but notes that it it has been challenging to get distribution and let people know that the company’s products are out there.

He has coped with this by working with the Asian American Trade Association Council, as well as attending trade shows and community events. “You have to get yourself out there,” he says. The American Asian Trades Association Council consists of 50,000 members controlling over 80,000 locations across the United States and Puerto Rico. Tomahawk Chips are then brought to these members for purchase of Tomahawk Chips into member owned C-stores.

Lea is proud of what he has accomplished with Native Canadian Chip. “The greatest moments are when young people come up to me and say ‘I can do that,’ and I tell them they can, stay in school and work hard,” he says.

He also has learned lessons from the business. “The biggest lesson is to keep working hard,” Lea says. “It only takes more work to get bigger and better; never let people tell you can’t do that, just do it.”

Lea sees a strong future for the company, which recently had its products picked up by Amazon.ca on its website. “I didn’t call them, but they called me,” he says. “It’s all about getting out there and getting your product out at the shows.”

Trade shows are very important, he notes, because this is where one can get in front of buyers and store owners. It is a must, he says, adding that these take place all across North America.

He also plans for Native Canadian Chip to add larger bag sizes for its products. “People are asking, and we’re getting to the stage where we can them,” he says.

Based in Riverton, Manitoba, the Riverton & District Friendship Centre (RDFC) was incorporated in 1981, becoming the 11th Friendship Centre in its province. Today, “We are so fortunate to have a great group of volunteers who treat RDFC as a regular, part-time job and work diligently to keep the services available to all,” it says.

“In brief, the aim of the Centre is to provide all members of the community with a variety of services to enhance the quality of life for all,” RDFC says. “The Friendship Centre acts as a referral service to anyone wishing to contact officials of the provincial, municipal or federal governments and agencies in such areas as employment assistance, housing, pensions, employment insurance and income tax.”

The Centre’s most important aim, it notes, is creating a greater degree of fellowship among native members of the community. “In addition, [we work] to make the greatest possible effort in striving to secure rights and opportunities for all persons, regardless of race,” it says.

Native Canadian Chip Corp. owner Alfred Lea’s background also includes the beverage industry, where he was able to connect with a famous face in the business world. “In 1992 while working on the Aboriginal Beverage Company, I had the privilege of sitting down with Sir Richard Branson to discuss the private label market,” Lea recalls.

In 1995, Lea explains, Branson came to Winnipeg to receive an award from the Issy Asper Foundation. “At which time Gerry Pencer from Cott Corporation had made the arrangements, [but] I didn’t know at the time who I was meeting, nor did I know who this man was,” Lea admits.