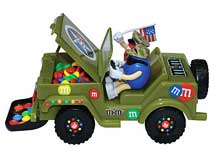 With an eye on design and a backbone built for business, this interactive confectionary manufacturer continues to make history in the world of toys and treats. The interactive confectionary product industry was relatively underdeveloped until Candyrific came along. But that didn’t stop Rob Auerbach and his two partners, Mike and Paul Roberts, from exploring the possibilities of bringing the candy and interactive toy industries together.

All three got their feet wet in the toy business, with Auerbach designing and licensing toys to companies such as Hasbro, Mattel, and Tyco and making royalties based on those designs. At the same time, Mike and Paul were designing, manufacturing, and distributing toys and occasionally worked with Auerbach.

Along the way, Auerbach’s design business, K&A Design Group, started designing confectionary products for Cap Toys, and lightning struck. “Just as with the toy business, the confectionary business is tightly knit,” said Auerbach, president of Candyrific. “It suddenly became clear that there was a natural cross-pollination between the confectionary and toy industries.”

“There was a little bit of a gold rush on the interactive candy industry at that time,”

But as with most things that look easy from the outside, the confectionary and toy companies soon realized the merging the two industries wasn’t quite so simple. To start, compared to confectionaries, toys have a limited market; within a mile of any one place, there could be two or three places that sell toys, but there are probably 50 places that sell candy.

The toy manufacturers also found out that their brokers couldn’t sell interactive candies effectively as they’d only worked with toy distributors, not confectionary distributors. Seeing an opportunity, Auerbach, Mike, and Paul combined forces and created Candyrific.

“We have learned from everyone else’s mistakes that confectionary is a whole different distribution chain than toys,” said Auerbach. “We completely threw out any toy broker relationships we had and formed a distribution network that mimics what successful confectionary companies do.”

That’s not to say Candyrific wiped out all potential challenges. Although the company has 800 different customers, the same top 25 brands that controlled the confectionary market in the ’60s are still in control today.

In addition, 80% of the confectionary space is already taken by companies such as Nestlé’s, Mars, and Wrigley’s—companies that spend millions and millions of dollars to advertise, market, and deliver customers to the buyers’ category. That leaves only 20% available for Candyrific items with no chance of breaking into that 80%.

Auerbach said for a buyer to put a Candyrific item in that 20%, the company has to clearly illustrate how it delivers value. “We have to give the retailers better margins than they’re going to get from, say, a Wrigley’s,” he said. “And we have to give them velocity; if the product sits on a shelf, they’re not interested.”

One of Candyrific’s advantages is its higher price point. The average price for one of its novelty items, whether an M&M fan, Etch-a-Sketch, or character bank, is $2.99 compared to $.39 for a pack of gum. Auerbach said this pretty much guarantees more dollars per SKU for the retailer.

“I can give them a profitable piece of real estate by having a higher price point and better margins,” he said. “I’m not in competition against Juicy Fruit, but I am in competition with the other companies that want that 20% of discretionary purchases by the buyer.”

When starting Candyrific, Auerbach, Mike, and Paul had three goals. The first was to not let any particular retailer dominate the company’s sales—an occurrence that often happens in the toy business.

“If a retailer hires a new buyer, you could suddenly be on the outside looking in, and business could suffer a fatal blow,” said Auerbach. “We had a goal for ourselves to not have any one retailer be more than 5% of our total sales, and we accomplished that.”

By cultivating international relationships, when Candyrific obtains a license, it produces product not only for its customers in the US but also those in Canada, Europe, Australia, and Brazil. “We can spend more money on tooling because we’re not just tooling for ourselves; we’re tooling for the world,” Auerbach said. “It’s a real hand in glove thing; the more sales we do, the more into the project we can get. “

The third of the founders’ goals was not to be solely dependent on licensing. Currently, its business is 50% non-licensed goods and 50% licensed goods. With non-licensed items, the door is open to global possibilities because it is in the company’s range, and there are no territory restrictions, no minimum guarantees, and no royalties to pay.

When it comes to licensing, Candyrific has another three-tiered approach to ensure it balances out the majority of its business. “When we look at our licensed business, we balance it from an age and gender perspective. We want the majority of licenses to be ‘evergreen,’ meaning they will give you stability year in and year out, and we want some of our licensing to be topical, meaning there’s a hot entertainment property behind it,” said Auerbach. “In a perfect world, it all comes out great.”

Behind the toys and tasty treats Candyrific produces, it has a company culture that relishes a noncorporate, entrepreneurial spirit. Everyone who works for Candyrific comes with a design background but also years of experience in the industry.

“We jokingly say we’re highly unemployable,” said Auerbach. “We’re not suits, but we’re experienced and serious business guys who approach the business with an irreverent and relaxed point of view.”

Auerbach said he and his team make decisions based on maintaining long-term relationships, which brings an easy-to-work and flexible attitude. For example, when configuring displays for retailers, rather than making the retailer fit to the display specifications, Candyrific fits the display to accommodate the retailer’s need.

“For Target, we might do a lay-down display, but Walgreens might want a 10-piece display and Rite Aid a six-piece display,” Auerbach said. “Our normal display is a 12-piece, but our flexibility and our desire to be problem solvers for retailers have really propelled our business.”

Strong relationships with companies like Mars and licenses such as M&Ms meld well with Candyrific’s approach to business. By understanding it is the emotional connection that attracts consumers to a licensed product has been a winning strategy.

“Our real core strength is our ability to design and execute product that consumers relate to and that brings a wow factor,” said Auerbach. “We’re toy guys; that experience enables us to bring the freshest items to the market, and buyers, licensors, and consumers recognize it.”