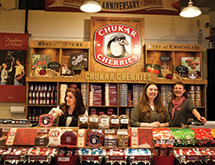 Chukar Cherries was doing all-natural and locally sourced before it was cool. In the past 15 years, the Washington-based manufacturer of fruit products rethought its organization and turned a good concept into a thriving business. “From the very beginning, we defined what we were going to do and what we weren’t going to do,” owner Pam Montgomery says of Chukar’s natural approach. “We wanted the product line to be a mix of wholesome and decadent with a limited number of ingredients. We wanted a well-operated work environment where employees could be creative, part of a team, and rewarded.”

“Our focus has always been on the best of nature, the best of chocolate,” Montgomery says. That motto has been a key motivator since Montgomery founded the company. Montgomery was 30 and a mother of three young girls in 1986 when she decided to move from Seattle and bought a cherry orchard with 8,000 trees in Prosser, Wash. At the end of each season, cherries were harvested by hand, leaving many trees unpicked or only partially picked.

While walking the orchard after harvesting, Montgomery noticed the dried cherries that remained, plucked them from the branches and savored the natural sugars. She soon got the idea to start a company that featured these dried fruits and Chukar Cherries was born in 1988. The company started off with a drying facility and storefront in Prosser, Wash., and opened its second store in Seattle’s Pike Place Market four years later.

When growing cherries for the fresh market, consumers and grocers want them large and picked green. But for the dried cherries that became the signature of Chukar Cherries, Montgomery needed them small and tree-ripened, so she sold the orchard to focus on Chukar’s fruit products.

The first 12 years were difficult as Montgomery worked to grow the business. “I didn’t know what I was doing,” she says. “Here I am, a new mother, starting this agribusiness. I consider it just pure tenacity and stubbornness the company survived the first 15 years.”

J.T. Montgomery applied his factory experience to Chukar’s production, reworked the balance sheet and set to turning the company’s systems and culture around. “You have to have a willing audience,” he says of the transformation. “We have some great people who are eager to learn.”

From 2000 until the recession hit, Chukar Cherries grew 10 to 15 percent annually and is again nearing 10 percent growth this year, representing a total turnaround from how the company operated before J.T. Montgomery came on board. “In a lot of ways, we’re more like 15 years old,” Pam Montgomery says of the difference.

“It’s really fun to walk through the factory nowadays and see it purring and remember what it was like 15 years ago,” J.T. Montgomery adds.

Chukar Cherries is a gift-oriented company whose business peaks during the holiday season. On a typical day, the company sends out between 400 and 500 packages plus wholesale shipments. But on major shopping days such as Cyber Monday, Chukar Cherries can ship as many as 3,500 packages, J.T. Montgomery says.

The company’s products are in high demand among fruit lovers and specialty grocer chains. Its main cherries are golden Rainier, Bing and sour Montmorency, but it also offers blueberries, cranberries, apple crisps, nuts and can coat almost any product in chocolate from California’s Guittard Chocolate Co.

“We made the decision to use the highest-quality American chocolate,” Pam Montgomery says of Guittard. Although the chocolate comes from California, Chukar creates its own chocolate blends and many other ingredients are gathered from the Pacific Northwest. Most of the fruit is grown within a 50-mile radius, with the farthest growers only about 100 miles from the company’s facility. Even Chukar Cherries’ packaging is designed by a local artist. “If you’re going to manufacture, support local and make sure it’s fresh,” Pam Montgomery says. “That’s really what the basis of the brand has been all these years.”

Chukar Cherries manufacturers almost everything it sells in-house. Fruit is dried at its facility and coated in chocolate using dragee pans. The company tracks historical sales data and times production with high and low periods to utilize just in time manufacturing principles so that every product is fresh. “We try to regulate our chocolate manufacturing throughout the year to make sure nothing leaves the plant that’s more than a couple of weeks old,” Pam Montgomery says.

The company opened its third retail location in Leavenworth, Wash.’s Bavarian Village in 2012 and is now looking at its next step for growth. With its 25,000 square feet of factory space starting to feel cramped, Chukar Cherries’ next goal is to expand its manufacturing area. The company is still early in the planning stages, but the expansion area could add about 10,000 square feet to the building, a viewing area for customers to watch the chocolate production and also free up space for sales and marketing. “It will give us space to grow over the next 10 to 15 years,” J.T. Montgomery says.