In the 1980s, studies were released that reported drying cherries without added sugar or preservatives was not plausible, but Pam Montgomery believed the natural sugars in tree-ripened cherries were enough, and she was right. Walking around her family’s orchard after cherry harvest, she discovered ripe Bing cherries drying naturally on the branches and the seed for Chukar Cherries was planted.

“I was 30 years old, married for the first time and moved from Seattle to eastern Washington where we purchased the largest cherry orchard in the state,” Montgomery remembers. “We didn’t know what we were doing with the orchard, but were ready to raise our growing family in the country.”

While walking with her daughters through the orchard, Montgomery came across a few trees where cherries had been missed during harvest. What she discovered is the natural sugars build over time and the cherries get really ripe, start to dry and wrinkle on the tree. “They were so delicious,” she says. “This was before dried cherries and fruits were mainstream.” 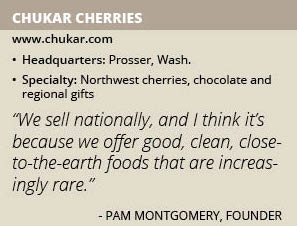 In 1988, Montgomery founded Chukar Cherries with the goal of being the go-to source for extraordinary Pacific Northwest foods and gifts crafted from locally grown cherries and berries. “We always wanted to be all-natural with as few additives as possible,” Montgomery says. “We lived by that – minimal ingredients and natural flavors. We have always been tree-to-table, buying local fruit and using domestic ingredients.”

The name of the Prosser, Wash.-based company came from Montgomery’s love of birds. The Chukar is an aerial speedster originally from Asia and related to a Rock Partridge. “When you see them, you don’t see them for long because they are fast and blend into the terrain,” she says. “When I first moved to eastern Washington, they had the National Chukar Championship every March and I was so intrigued because I had no idea what it was. It’s a fraternity of blue-ribbon bird dog owners who train their dogs to flush the birds out of the tall wheat fields while the judges rate the dogs based on performance.”

As Chukar Cherries continued to grow, Montgomery met her second husband, JT Montgomery, 18 years ago when he provided consulting services to the company. Their relationship grew and the couple has been married now for 13 years.

As co-owner and CFO, JT Montgomery oversees the company finances and operations while Pam focuses on research and development. “Pam pioneered dehydrating Northwest cherries without additives in the 1980s,” he says. “I’m the operations guy so Pam can be as creative as she desires with new products and our catalog series.” 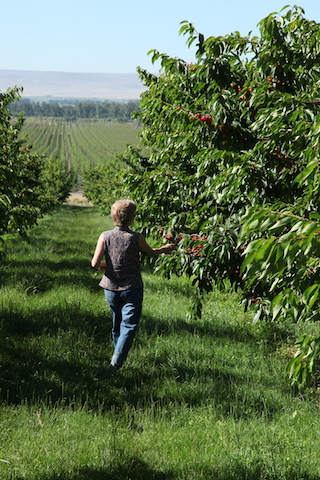 In 1992, Chukar Cherries launched its flagship store in Seattle’s Pike Place Market, which is three hours from its manufacturing facility and has become a destination for local and international visitors. “Chukar is one of the few agriculture companies that has really strummed both worlds successfully,” Pam Montgomery says. “I think having grown up on the west side, I was comfortable there and had a good understanding of the urban region and that helped our success in the beginning.”

Today, Chukar Cherries’ products sell themselves because they have nationwide appeal, Montgomery says. “We sell nationally, and I think it’s because we offer good, clean, close-to-the-earth foods that are increasingly rare,” she adds.

Chukar Cherries’ store at Pike Place Market is often the first contact customers have with the brand and JT Montgomery says communicating the company story is of utmost importance. “We have been a very early participant in that venue and we have worked hard training the staff so they know the Chukar story is an important part of the product,” he says. “We first ask customers, ‘Are you familiar with Chukar Cherries?’ You can get them hooked with that question and start telling the story and the product. The two blend together and enhance the sales process.”

Pam Montgomery agrees. “We have to explain what we are doing and why we have been doing it for so long,” she says. “All the big companies use the same words on their packaging and make it look like they are start-ups, but are really owned by big conglomerates. Most dried fruits and nuts are purchased overseas, but Chukar is different. We actually do buy all our cherries from local farmers and dry them ourselves.” “We have the benefit of exposing Chukar to about 10 million visitors a year in Pike Place Market and capture new customers through the constant barrage of tourists hitting the Seattle area,” JT Montgomery adds.

Chukar Cherries produces everything it sells and 70 percent of its sales are direct-to-consumer through its Pike Place Market store, its factory and headquarters in Prosser and online. The company also sells through select retailers, but is cautious of who it partners with because it wants to ensure the quality is maintained and its products arrive fresh to the customer.

To keep up with increased demand, Chukar Cherries is building a new 12,000-square-foot processing facility and has worked with consultants to ensure it is designed for maximum efficiency. “We are absolutely crammed to the gills in the space we currently have,” JT Montgomery says. “We have expanded our organic line and are launching a new holiday line.”

Chukar Cherries also is looking at additional retail site opportunities and continues to search for the perfect location. In addition to its traditional sales channels, the company has begun partnering with local schools for fundraisers, which it expects will increase its local presence. “We are partnering with schools as a way for them to raise money for the football team or band,” JT Montgomery says.

Moving forward, Chukar Cherries plans to continue expanding and producing the high-quality products its consumers have come to know and love. “We are an iconic Pacific Northwest brand and we want to continue to expand our customer base throughout the country,” Pam Montgomery says. “Our goal is to continue to do what we are doing and maintain the quality of our products.”