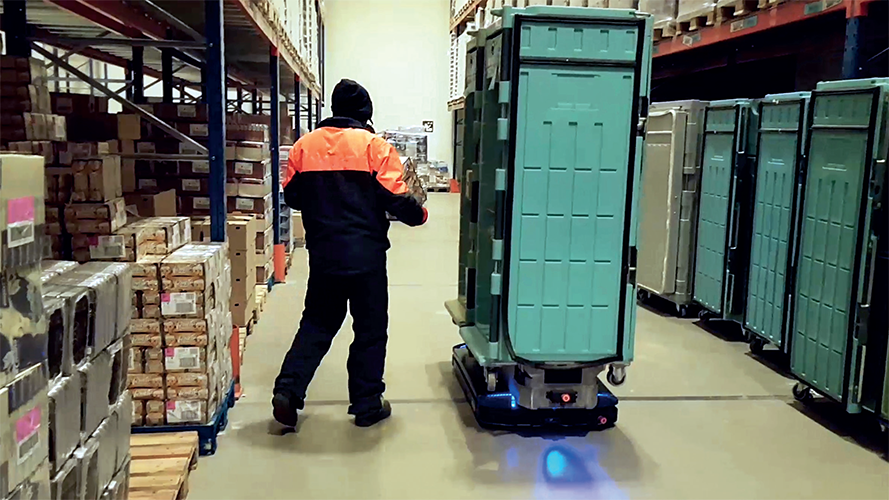 Faced with the likelihood of long term staff shortages and resulting rises in pay rates, warehouse and distribution center operators in grocery and many other sectors are turning sometimes belatedly to automation. This is certainly an option but not all solutions deliver really significant productivity improvements.

Labor shortages in logistics have been building for some years, by no means just because of Brexit, and the inability to fulfil orders reliably is becoming an existential threat for many firms. Logistics UK in October claimed that: “Thirteen percent of traders are reporting severe warehouse staff shortages”; in November the Cold Chain Federation noted “ten percent to 20 percent shortage rates” among its members. The Recruitment and Employment Confederation reported a 9.1 percent increase in Fork Lift Truck (FLT) driver vacancies just in the first week of November, with pay rates jumping 20-30 percent and Clare Bottle, CEO of the UK Warehousing Association (UKWA) told BBC News that: “if anything, warehousing has been hit harder than driving by the exodus of people from our workforce”. Meanwhile, available workers are older, and arguably more vulnerable to injury from heavy and repetitive manual tasks – distributors are already under pressure from Unions and workforce representatives over unacceptable rates ofmusculo-skeletal injury.

Given these obstacles, how will grocery operators cope with the increase in throughput required? A solution that could double or quadruple productivity while removing much of the physical labor is very welcome. One such solution being the new range of AMRs (Autonomous Mobile Robots) recently launched in the UK by iFollow. 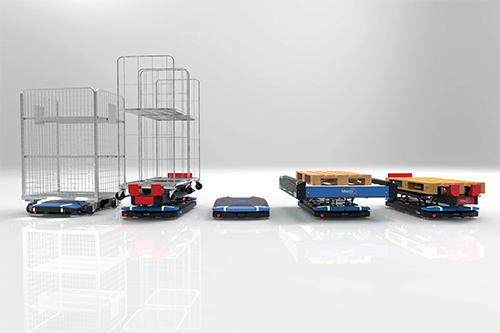 Using patentable technology, this solution attacks the problem on two fronts. Firstly, each AMR can transport two roll cages at once, to a total load of 1000 kg – they can also transport pallets, or trolleys. Secondly, they allow a picker/operator to work with multiple AMRs simultaneously. So potentially, on a single pick walk an operator attended by two AMRs could be assembling the orders for four different stores or customers. In practice, improvements in overall operational productivity of between 28 percent and 42.5 percent are routinely reported.

This AMR design approach addresses other issues. Commonly, a distribution center works with a combination of pallets and roll cages, the ratios of which may change over time. A swift and simple swap of carrier frames readily converts the AMR from cage transporter (for all commonly used types of cage) to pallet or trolley use, and vice versa. Combined with the well-known advantages of AMRs in that, unlike AGVs or conveyors, they require no fixed infrastructure, this means there is no loss of flexibility in warehouse operations.

Additionally, iFollow equipment can operate at temperatures from -25°C to +40°C without degradation of battery life. The benefits of carrying two roll cages at once when it comes to minimizing time spent in chilled and cold stores, and the number of times cold store doors have to be opened, are obvious.

The technology achieves a productivity advantage without compromising operator health and safety. The route planning software won’t allow the AMR to move towards fixed obstacles such as walls or racking, or moveable objects such as workers detected by the machine’s array of sensors. Each AMR has front and rear LIDAR arrays, defining ‘safe areas’ for forward or reverse motion – if anything is detected within these areas, the motors are stopped and the brakes applied. Considering that, even in manual warehouses, between two thirds and three quarters of days’ absence by operators is caused by ‘interactions’ with the handling equipment, there is the potential for considerable reduction in physical injuries. The psychological benefits of workers no longer being continuously worried about potential collisions should also not be underestimated. Relaxed operators tend to be more productive, and more accurate.

A further safety feature derives from the AMR’s ability to turn within its own footprint, combined with the operating software’s tight control of speeds and accelerations, both linear and angular. The ideal aim of loading a roll cage with the heavier goods at the bottom is rarely achieved, leading to stability issues under rapid acceleration. Acceleration, even under manual propulsion, can also lead to goods spilling out of the back unless, as is the practice in many warehouses, the ‘gate’ is closed between each movement, which is tedious and time consuming. Controlled and gentle movement by the AMR mitigates against these risks.

Given the current supply situation, grocery distribution operations form an obvious user community for this kind of AMR technology, but it is equally applicable to other sectors such as DIY, general merchandise, or clothing and fashion, which is another big user of specialized roll cages.

Through creating safer, more satisfying and productive roles in grocery logistics – with less walking, more useful picking, less heavy labor and exposure to hazards and arduous conditions – there are opportunities to improve labor recruitment and retention while reducing absences. Installation does not require expensive and disruptive infrastructure, while the AMRs are built to cope with rough floors and at just 17cm high, do not raise any height issues. Productivity improvements will go some way to mitigating the relentless upward pressure on pay rates, while low training costs (training a new or redeployed member of staff is a matter of minutes) combined with potential reductions in safety, injury-related, and staff recruitment/retention costs, form a significant part of the Return on Investment argument and the wider business case.

Clearly, a double roll cage handling AMR solution can make a real difference in helping the grocery distribution trade continue to bring food to our tables reliably and affordably, despite all the current and future challenges.

Vincent Jacquemart
Vincent Jacquemart is CEO at iFollow. iFollow is an industrial company, specializing in the design, development, and manufacture of mobile robots for heavy load transportation in the industrial and logistics sectors. More than 40 employees of five different nationalities reinforce the know-how in mechanics, electronics, embedded systems, artificial intelligence, and robotic navigation intelligence. iFollow has partnerships with several recognized integrators such as Wiio in France and PMT Corporation in Japan.
www.ifollow.fr