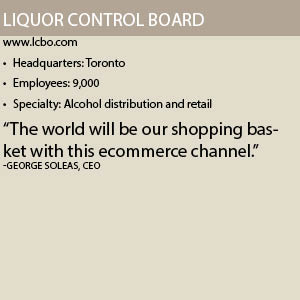 The LCBO’s socially responsible practices are tied to the organization’s status as an enterprise of the government of Ontario, making it effectively owned by the province’s taxpayers. LCBO stems back to 1927 when Ontario was the last southern province to end prohibition and created the LCBO as a means to control the distribution and sale of beer and spirits. The enterprise now operates 657 retail stores throughout Ontario and earns $5.57 billion in revenue. Those sales provide a direct benefit to the province through an annual dividend – $1.935 billion in 2015-16 – that funds roads, health programs and other infrastructure projects and public initiatives in Ontario.

For most of the past century the LCBO has enjoyed an inherent advantage as the primary place for consumers to purchase beer, wine and spirits, but its role in the market is changing as the province begins to loosen alcohol regulations. The LCBO already competes with The Beer Store, a 450-store retailer owned by 25 Ontario-based brewers, and nearly 300 privately owned winery stores selling domestic wine. However, it will soon face increased competition from retailers that were traditionally prohibited from offering alcohol.

Although consumers will soon have far greater options on where to buy their beer, cider and wine, LCBO will retain some advantages in the market because spirits will continue to be sold exclusively through its stores. The enterprise’s alcohol selection also dwarfs that of its competitors. LCBO offers nearly 9,000 different products through its stores but that number climbs to 24,000 products from 86 countries when factoring in consignment and private orders.

The enterprise prides itself on having best-in-class retail stores. For many years the quality of those stores combined with customer satisfaction created a belief that LCBO did not need an online shopping presence. But with grocery stores now offering greater convenience for alcohol sales, LCBO realized ecommerce was another way it could differentiate itself in a more competitive market.

Last June, LCBO rolled out its ecommerce service, allowing of-age adults to purchase alcohol online. During the recent holiday shopping period, about 200 orders a day were made through the ecommerce system and the average basket is valued at $220, according to Soleas. The platform took about six months to exceed $3.2 million in sales, putting it on strong footing for future growth. “You could say we’re late comers to this game but this is new business for us,” Soleas explains.

Online sales created an avenue for LCBO to become more convenient to customers, but it also allowed it to take advantage of its greater depth of products. Stores have a finite selection of beers, wines and spirits, but there is no limit to what LCBO can sell through the Internet. The enterprise now offers about 6,000 products online and plans to expand its ecommerce selection to 10,000 items later this year. “The world will be our shopping basket with this ecommerce channel,” Soleas says.

But even as it expands to online sales, LCBO is not losing site of its duty as an alcohol retailer. “We rolled it out in a cautious way because we wanted to address issues with social responsibility,” Soleas says. LCBO found a partner that shared its values in Canada Post, the country’s leading postal service provider. The organizations worked together to develop a system that ensured underage citizens could not abuse the ecommerce platform.

When an order is placed, Canada Post delivers the package to the customer’s home but before it is handed off the recipient must provide a photo ID that matches the name on the order. Alternatively, a package can be delivered to a nearby LCBO store where the customer can pick it up in person.

Through this system, LCBO balances its mandate for social responsibility with the convenience customers demand. “We didn’t want to commit to something we weren’t 100 percent sure we can deliver,” Soleas says.

Another advantage of LCBO is that the organization acts as its own distributor, enabling it to create innovations in the supply chain on a scale far beyond most any other retailer. LCBO operates five distribution centers in Ontario, the largest of which is 650,000 square feet and is fully automated.

The facility’s automated palletization technology can sort more than 50 million cases annually and was developed by LCBO’s own in-house engineers. The technology impressed many in the industry and in 2015 earned a Supply Chain Innovation Award from the Council of Supply Chain Management Professionals Conference.

The automation is just one example of how LCBO’s supply chain innovations are highly regarded by the entire alcohol industry. “We were the first ones in the world to insist on a light-weight glass bottle,” Soleas says. LCBO pushed its suppliers to move to glass bottles weighing 420 grams or less to reduce weight and fuel consumption during transportation and put less physical strain on warehouse workers.

The impact of lighter bottles has only increased as more suppliers made the switch. Five years ago, LCBO lost 290 days of worker production annually due to injury. Today, the organization has realized an 82 percent reduction in lost time because of improved case ergonomics and light-weighting. “These types of innovations have helped us to reduce lost-time injuries and the severity of the injuries,” Soleas adds.

Technology is not only advancing LCBO’s presence online and in the supply chain, but is also enhancing the customer experience in-store. The team behind those innovations is LCBO Next, a Waterloo, Ontario-based co-op that works out of Communitech, a tech hub that supports the growth and success of technology companies.

Each semester, four engineering and computer science students from Ontario universities are chosen to participate in the co-op and are managed by an LCBO employee. The first batch of students joined LCBO Next last September and the program recently welcomed its second group. “We dream the ideas and they work on and brainstorm the ideas to develop apps and other ideas for our stores,” Soleas says.

After only a few months of operation, the LCBO Next team developed a few prototype phone apps that allow customers to search product by speaking into their phone and retrieving information on the price, available inventory, and nearest stores that have it in stock. Another prototype app in development provides in-store maps to help customers find products on the shelves and a third app uses beacon technology to alert product consultants that a customer needs help.

The technology investments developed at LCBO Next and by the enterprise’s in-house engineers are helping LCBO remain relevant in the face of a major market shift. “We operated in an environment where we were very privileged in the past,” Soleas says. “Now our customers will have an option.”

Soleas expects that 20 percent of sales will shift from LCBO retail locations to grocery stores during the next eight or nine years. The organization will get some of that revenue back through increased distribution because it acts as a wholesaler to those grocery stores, but it still must change its retail strategy to reflect the new market reality. The predictive models and variables LCBO previously used to determine new store openings and renovations will change amid the increased competition.

But instead of running from the competition, LCBO is embracing the challenge by finding ways to cement its status as the primary destination for alcohol in Ontario. “We’re already working on ways to make sure the LCBO becomes customer focused,” Soleas says. “No one gives you customer loyalty. You earn it.”