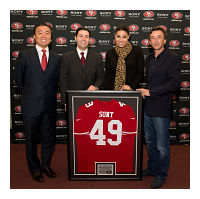 Dec. 11, 2012 – The San Francisco 49ers and Sony today announced the global entertainment company will be the official consumer electronics partner for both the club and the New Santa Clara Stadium. As part of the multi-year agreement, Sony also becomes the presenting partner of the 49ers Hall of Fame, an integral part of the fan experience in the new stadium.

“Together with Sony, the 49ers are committed to creating the ultimate game-day experience, as we are building a fan-friendly, technologically-advanced stadium that embodies the finest of Silicon Valley and the Bay Area,” York added. “Sony’s experience in consumer electronics, professional products and entertainment will make the 49ers Hall of Fame and the New Santa Clara Stadium must stop destinations for fans and guests of all ages.”

The partnership with Sony centers on maximizing the entertainment value provided to fans, using Sony’s advanced technology to create personal, engaging, compelling and interactive experiences for the 49ers Faithful fans, both online and in-stadium. Using products and services from Sony’s consumer and professional business divisions, both the stadium and the Hall of Fame will deliver unique experiences, including Sony’s industry leading emerging technologies like 4K Ultra HD displays, providing visuals with four times the resolution of Full HD.

“As a proud leader and an innovator in entertainment, Sony is pleased to partner with the San Francisco 49ers, proven winners and innovative leaders in football and sports entertainment,” said Phil Molyneux, president and chief operating officer of Sony Electronics. “We’re excited to be part of the team’s winning tradition, and will be working closely with the 49ers and its fans to develop in-stadium, at-home, and mobile entertainment experiences for the 49er Faithful that are second to none, not only in the NFL, but anywhere.”

The Santa Clara stadium will not only be the new home to the San Francisco 49ers, but it will serve as one of the world’s premier outdoor sports and entertainment venues. It was designed by HNTB and is being built by Turner/Devcon. The $1.2 billion venue will cover 1.85 million square feet, seat approximately 68,500 and will feature an expected 165 luxury suites and 9,000 club seats. It was designed to be a multi-purpose facility with the flexibility to host a wide range of events including, domestic and international soccer, college football, motocross, concerts and various civic events, and will be expandable for major events such as the Super Bowl.

The New Santa Clara Stadium will feature a 20,000-square-foot educational and innovative Hall of Fame, consisting of multiple galleries in which extraordinary exhibits about the 49ers stories, legacy, and mystique come alive.  Cutting edge technologies will be used in many of the interactive exhibits throughout the galleries.