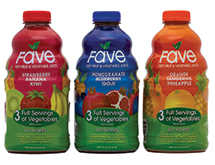 With ever-narrowing margins, retailers are intent on getting the product edge that can make them a shopper destination. New products can help them do that, but many grocers are inundated with them.

“Retailers are overwhelmed with new items in the U.S.,” The Fave Juice Co. President and COO David Kirkpatrick maintains. “Each year, 30,000 new items are launched, and 95 percent-plus of those fail – and those include new items from really good companies like Coca-Cola, Procter & Gamble and PepsiCo. When you’re a little company or a startup, the odds are much worse than 95 percent.”

On top of that, whether the company will remain in business if its product fails is a legitimate concern. “Retailers have a reason to look at guys like us and say ‘no,’” Kirkpatrick concedes. “But what’s interesting is when you speak their language and talk about the shelf-stable juice category, which is a pretty big piece of real estate – up to 44 feet in a supermarket – when you ask how it’s doing, it’s been in steady decline for a decade.”

Real innovation in this category has been sparse. “People keep introducing new flavors of the same old products, or they take core brands, dilute them, add artificial sweeteners and call it ‘lite,’” Kirkpatrick maintains.

As consumers have grown more health-conscious and sophisticated about products, they realize that many “juice” products in the shelf-stable juice aisle contain more sugar than juice. “The reason shoppers are in that category is health,” Kirkpatrick emphasizes. “They are in the juice aisle because they think it’s good for them. As an industry, if we simply play around with flavors and artificial sweeteners, we’re missing what drives purchase behavior.”

The problem with vegetable drinks has been taste, Kirkpatrick maintains. That is the challenge that The Fave Juice Co. has solved with its line of all-natural vegetable/fruit juice blends. In Fave, the concentrated juices of cucumber, carrot, tomato and beet are reconstituted and joined by one of three reconstituted and concentrated fruit juice blends – strawberry-banana-kiwi, pomegranate-blueberry-goji or orange-tangerine-pineapple. Those sampling Fave notice the fruit first.

“When I watch in-store sampling, I stand so far away they don’t notice me,” Kirkpatrick recalls. “I watch consumers who taste Fave grab the bottle out of the hand of the sampler and read it. That’s really gratifying when you see that kind of behavior at a sampling station. You’ve probably got a winner there.”

The only sugar in Fave comes from the natural juices – no sugar is added. Each 8-fluid-ounce serving of Fave contains 60 calories and provides the equivalent of 1-1/2 cups of vegetables – the equivalent of three daily servings, the company says. The United States Department of Agriculture’s (USDA’s) MyPyramid recommends average daily consumption of 2-1/2 cups of vegetables for a 2,000-calorie diet.

Very low in sodium, each 8 ounce glass of Fave also provides the equivalent of 1/4 cup of fruit. In addition, each serving of Fave – which has been included in a pending comprehensive U.S. patent – provides:

•25 percent of the USRDA for Vitamin A

•6 percent of the USRDA for calcium

Fave won the 2012 InterBev Award for Best Juice or Juice-based Drink in North America. It was also called a “hit new product” by the Supermarket Guru and won a 2013 Gold Addy award.

Fave is sold only in recyclable 46-ounce polyethylene terephthalate (PET) bottles. It is co-packed by Stapleton’s at its manufacturing plant in Gridley, Calif. Fave and Stapleton’s shared the expense of installing a new high-speed bottling line with a filler, capper and state-of-the-art shrink-wrap machine for the bottles. “We are seamless partners with them,” Kirkpatrick emphasizes.

In keeping with the sustainable nature of its products, Stapleton’s Gridley production facility installed a solar hot water heating array on its roof measuring approximately 20,000 square feet, which reportedly is one of the largest in the state of California. “We welcomed the solar array and were strong advocates for it,” Kirkpatrick remembers. “We believe it’s the right thing to do, and there are business benefits to being green. It’s one of those happy coincidences that helps the bottom line and helps us sleep at night.”

The decision to co-pack its product was an easy one for Fave. “It made more sense to use a co-packer than build or purchase a bottling plant,” Kirkpatrick explains. “They’re better at bottling than we could be, and we prefer to focus on marketing elements. Our tech guys go out there and look at the facility and make sure it is Safe Quality Food Institute – and British Retail Consortium Global Standard-certified and do test runs. If the quality is right, they become a production facility. Co-packing is very typical of the beverage and juice business – even very large companies like Coca-Cola use co-packers.”

Fave sources its concentrated juice and vegetables from the United States and around the world depending on availability. “Each of our flavors has eight juices,” Kirkpatrick says. “Typically, the majority of the eight juices are from North America. If somebody has a crop failure in one region, that’s why we buy on the world markets.”

As The Fave Juice Co. grows, the possibility of using a co-packer in the eastern United States is a possibility. “We’re really shipping water, and that’s expensive, even in a PET bottle, which is lighter than glass,” Kirkpatrick points out. “The farther we truck it, the more energy cost is passed onto the product, and it’s not environmentally friendly. In the natural food segment, most juice comes in glass bottles. Glass is all-natural and recyclable, but it’s also really heavy.”

The Fave Juice Co. was founded in 2010 and began introducing its product to the market in 2013 after 2-1/2 years of product development and testing. “We literally began with nothing more than the technology to concentrate vegetables in a unique and patented way,” Kirkpatrick recalls.

The privately held company considered selling or licensing its technology. “After exploring lots of different options, the company said, ‘This is too valuable to release,’” Kirkpatrick remembers. “’We believe the ability to concentrate vegetables this way is so powerful that we want to launch the brand ourselves – despite the challenges of doing so.’”

Feedback from attendees of the 2011 National Grocers Association’s Show, the Natural Products Expo West in 2012, InterBev 2012 and the 2012 Food Marketing Institute convention was invaluable to the product’s development, Kirkpatrick stresses. Fave was sampled, and prototypes with various versions of the name, trademark, packaging and graphics were evaluated.

“You can’t pay enough for that feedback from folks in the business,” Kirkpatrick emphasizes. “That NGA show became an extremely helpful product development moment for us to validate that our product tasted good and our premise made sense to folks who would be making that decision at store level.”

“They’re very complex – it takes forever to sell to them,” he stresses. “We’re a very patient company. I’m very comfortable building our business with high-performing local and regional chains. As we build a success story and talk to larger retailers, we’ll say, ‘We’ve taken the risk out of the equation for you.’ My 30 years in this industry taught me how leading retailers think.”

An additional fruit flavor and single-serve packaging are possibilities for the future, but single-serve packaging would require selling to completely different markets, such as convenience, petroleum and drug stores. “The juice industry’s core packaging is still the big bottle,” Kirkpatrick declares. “That’s the bulk of the juice category volume, and that’s where we’re putting our efforts today.”

The Fave Juice Co. will promote its product through free-standing insert (FSI) couponing in Sunday newspapers and direct mail as well as digital media. “We’ll do FSI couponing because that is part of the food business in North America – though it’s a less important part than it used to be,” Kirkpatrick comments. “Digital is where we’re going to be spending the bulk of our money because it is totally targetable, very efficient and measurable. You run a magazine ad and hope they read it, but you have no idea. Digital media targets down to the age, gender, income, zip code – whatever demographic you want to target. For us, that makes a very efficient spend.”

The Fave Juice Co. is emphasizing digital media so that the female shoppers ages 25 to 49 who are its target market can become educated about the advantages of the product. “Label readers are our best shoppers,” Kirkpatrick concludes. “If we can get her to actually read about Fave, we’ve hooked her. She’ll stay in our franchise. There’s nothing else that comes close to delivering three full servings of vegetables that still tastes really good.”

For the future, Kirkpatrick feels Fave has set an attainable goal. “We would like to hit $100 million in sales in three years, and that’s not an unreasonable number,” he asserts. “The shelf-stable vegetable juice category is at least four times that large in food stores. We don’t expect to do that by stealing business from the other guys because they’re bigger than us. There’s nothing wrong with the brands out there, but they’re not bringing new people into the category. If it ends up being $100 million we’ve added to the category, that’s a good thing for retailers.”