Known as the “fab four of fun for the under fives,” The Wiggles have become an international sensation as the world’s most popular children’s entertainment group. “One of the main parts of the formula of our success is our live touring program,” Managing Director Paul Field says. “We are probably the only touring group that performs in every state and territory in Australia.”

Field’s brother, Anthony Field, created The Wiggles in 1991 in Sydney. With a degree in early childhood education, Anthony Field directs their creative vision and produces their music, which is at the core of The Wiggles appeal. “The Wiggles are dominating the global stage like never before,” Paul Field says. “While The Wiggles sound is as identifiable as a Beatles harmony, it is a new sound.”

There are now a variety of voices in The Wiggles songs that can be heard during the group’s live shows, and on CDs, DVDs and TV episodes. Anthony Field is the blue Wiggle. Emma is the drum-playing, singing, dancing girl with a yellow bow in her hair. Lachy is the purple Wiggle who loves playing the piano, singing and dancing. Simon is the red Wiggle who commands a presence with his wide ranging opera singing voice.

The Wiggles have been performing worldwide for almost three decades. The children who once saw The Wiggles are now bringing their children to enjoy the early childhood entertainment group. Total brand awareness of The Wiggles in the United States among those 18 years and older is 51 percent and 77 percent among preschoolers.

“Many years ago when The Wiggles released their very first live-in-concert video called Wiggledance, we cut to a shot of the audience at one stage and there is Emma when she was a preschooler, dancing in the audience with her younger sister,” Paul Field says. “How wonderful is that?” 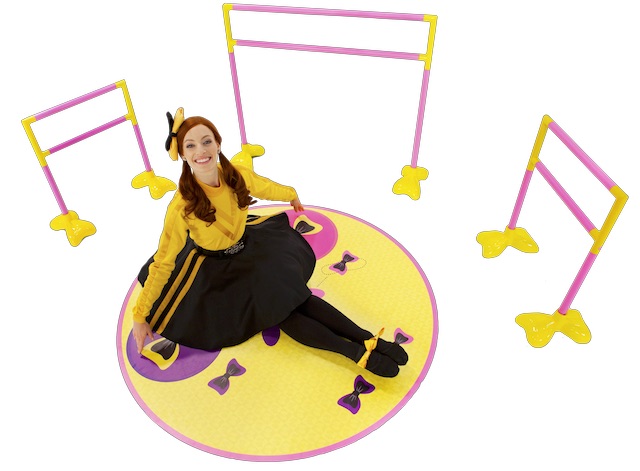 Emma started dancing with The Wiggles videos and Field says he has no doubt that many children will continue to be encouraged to do ballet and other forms of dancing through The Wiggles songs and videos they have seen. “I recently heard Geena Davis speak at the Kidscreen Summit in Miami about encouraging young girls and her mantra is ‘if she can see it, she can be it.’” Field says. “Well, Emma is the living embodiment of that expression.”

In addition to the songs and videos, The Wiggles fans have been introduced to new play patterns. They now want to dress up in the costumes they see Emma wear and read books about dance. The Wiggles have produced the Bowtiful Ballet Studio, which has a ballet barre, dance mat and instructional DVD that launched in holiday 2017 as a huge success in the Canadian market at Toys “R” Us.

Emma is now the favorite member of The Wiggles, which Field says has been reflected in the sales of a wide range of products. The 15-inch Emma Ballerina Doll sold out in a matter of days during its launch at Toys “R” Us Canada. The doll is now available at both Toys “R” Us and Wal-Mart Canada and will be launching at Barnes and Noble in the United States in August.

“If ever there was proof about the changed play patterns of The Wiggles, it is that,” Field notes. “The Wiggles were one of the few early childhood brands to have an equal 50/50 percentage appeal between boys and girls. And despite the star power of Emma, it has only changed slightly to 55 percent girls and 45 percent boys.”

As a testament to that, The Wiggles Big Red Car ride-on coupe in Canada has been selling very well at Toys “R” US, which is an iconic vehicle to The Wiggles brand and is gender neutral.

Preschoolers consume The Wiggles content through YouTube, Treehouse/Universal Kids, Netflix/Hulu, Facebook, iTunes and Spotify. “The Wiggles are the kings of content, and it’s wonderful to see Wiggle, Wiggle, Wiggle doing so well on air,” Field says. “It’s the No. 1 show on Treehouse in Canada and doing extremely well with both Hulu and Universal Kids in the United States, and of course with the ABC throughout Australia.”

With the power of The Wiggles YouTube channel, they are able to reach new generations of fans throughout the world. The success of The Wiggles Nursery Rhymes on YouTube, which has 26 million views and growing, has led them to collaborating with other content creators like Super Simple Songs and Mother Goose Club to leverage their audience reach and extend their brand to new audiences. 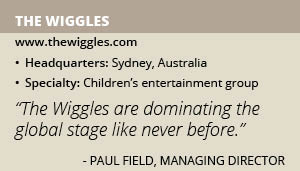 In June, The Wiggles will tour the United States from Anaheim, Calif., to Boston. “The Australian Consulate will be hosting an event in June in New York City to celebrate the re-launch of one of Australia’s favorite exporters of music,” Field notes.

Three days are scheduled for Toronto to showcase the Emma & Lachy tour. These three shows sold out in six minutes! “The Emma & Lachy video special is due to be released in the next month, and then straight after that we will complete a new album and video called Wiggle Pop!,” Field notes. “The Wiggles will then return to Canada for their fall tour later this year, which will delight fans across the nation.”

During 2017, The Wiggles performed to more than 345,000 fans. “One of the strongest things we offer our partners is a link to their audience,” Field says. “We engage both the parents and the children with characters, activities and song. What it does for the parents and caregivers is help them in their daily lives and also provides another connection to their children.

“Parents appreciate the fact that we can help their children stay in their car safety seat, that we can encourage children to brush their teeth, to read a book, relax at the end of a day and think about the good things they have done during the day and so on,” he continues. “The same opportunity exists with broadcast partners.”

The Wiggles owns its own production facility in Sydney, Hot Potato Studios, which is complete with a recording studio, sound stage and a post-production suite. “We make all of our content there and we are more than happy to do bespoke pieces for our broadcast partners, retail partners and the like,” Field says. “We can help inspire your sales team or retail buyer, assist with in-store, online or on-air promotions.”

Last year, The Best of The Wiggles CD was awarded a gold album and the company expects when The Best of the Wiggles comes out on DVD it will be a regular on the retail carts and shelves for quite some time. The Wiggles have released the follow-up to its successful Nursery Rhymes album, which entered the iTunes children’s charts at No. 1. And entered the national ARIA charts at No. 3 just under Ed Sheeran and The Greatest Showman soundtrack. The Nursery Rhymes 2 video will be released later this year.

Wiggle Pop! will feature original Wiggles words and songs and each song will be a homage to great musical artists from the past. “We can’t wait to look and see this one,” Field says. “Our releases are now synced worldwide so that no Wiggle fan across the planet has to wait any longer. Wiggle Pop! will also be the name of the end of year Australian arena tour, which will go on sale in July. Last year, a new Wiggles world record was broken with over 90,000 tickets sold in the first 24 hours. After performing five sold out shows at Perth Arena, The Wiggles set a record for the most number of tickets sold by any artist at the venue, including Bruce Springsteen and Pink! The tour went on to sell 130,000 tickets.”

The Wiggles will film a new TV series in 2019. “The Wiggles are about to go places at levels we have never been before in our 27-year history,” Field says. “While we will continue to tour Australia like no other act ever has, and while children who once saw The Wiggles are bringing their children to see us, we are starting on a brand new journey and of course we invite all of our partners to join us.”

As millennial parents continue to look for things that will help their children grow as good, happy and capable individuals, Field says “the real-life appeal and engagement of The Wiggles is something that’s longed for by parents and caregivers.”