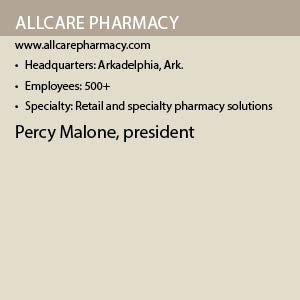 Malone grew up poor and worked several jobs to move out of the Mississippi Delta. After he graduated from the University of Mississippi’s pharmacy school in 1965, he moved to the Beaumont, Texas area, to pursue his dream of starting his own pharmacy.

“I could also earn $3.50 per hour as a pharmacist, which was a lot of money back then,” he says, chuckling. “In that area, I wouldn’t have been able to start my own pharmacy without the proper backing and support, so I moved to Arkadelphia. I met a man, I.B. Fuller, who was looking for someone to take over ownership of his pharmacy as he was preparing to retire. I went to see him on a Sunday afternoon and I was hired the same day.”

Malone notes he suggested that they “build small stores” that promoted discount prescriptions and generics. “That was very unfavorable at the time,” he recalls. “Bill Clinton was the attorney general, and he had ruled that pharmaceuticals could advertise. So that was how I got started in the business: by being able to sell lower-priced medicine for people in Arkansas. From there I grew to five stores.”

A few years later in 1980, Malone decided to focus on providing services for nursing homes. “I learned that most traditional retail pharmacists did not want to be called out after hours or on weekends,” Malone says. “I’m not sure when the first closed-door pharmacy opened, but I opened mine that year. I would fill prescriptions for nursing homes about 30 miles away and deliver the medicine myself after closing.”

For every pharmacist he has interviewed, Malone has asked one question of them all since he started the company. “I would tell them to think about the person they love the most on this earth,” he says. “Then I’d ask that if it was 2 a.m. Sunday and their loved one needed their medicine in a nursing home, would there be anything on Monday I could say to make you feel OK about not getting the medicine there on time?

“I still ask everyone I interview for hire that question today,” he notes. “We believe in getting medicine to people that don’t have a choice if they get sick nine-to-five, Monday through Friday.”

AllCare Pharmacy has found much success with that personalized method of delivering prescriptions and hiring employees. Today, the company has more than 500 employees who work in 23 pharmacies in 20 towns. AllCare provides correctional institution, specialty, retail, and long-term care pharmacy solutions for customers across the state of Arkansas.

In addition to the personal touch, AllCare Pharmacy also embraces technology. “Along with our many services, 25 years ago I started and built my own pharmacy software package,” Malone says. “We develop state-of-the-art software that ensure the highest quality of care for people living in long-term care, assisted living and home care settings.

“Over the years, our software has allowed us to provide our customers their prescriptions and have them delivered quickly,” he continues. “I hired two young men when they were in college, one unfortunately died several years ago. But the other guy has become my No. 1 programmer and he has been with me for 40 years.”

Many other programmers for ExactMed, which is based in Atlanta, work for Malone as well. “When we first started, we built an electronic medical record initially for prisons because they have a hard time keeping records,” he explains. “We also expanded, many years ago, to nursing homes. So we’ve attempted to remain on the cutting-edge in the industry. We have a lot of robotics, and it’s all to ensure that we have the right medicine being given to the right patient at the right time. We want to be No. 1 and first in the marketplace for our customers.”

AllCare also operates in mental health clinics and hospice environments, emphasizing synchronization and compliance throughout all of its pharmacies. “We do that so people who need to refill drugs three or four times a month won’t have to take multiple trips to the drug store,” Malone says. “They call us and let us know that it’s time for a refill. We’ll refill their prescriptions, make sure nothing has changed if necessary, and have it ready for them to pick up or be delivered.

“We’re also working towards providing multi-dose packaging services for our customers,” he adds. “There was a woman who visited us from Chicago and asked us if we could multi-package her husband’s mother’s medicine because he spent about two hours every week doing it. She felt that time could be spent better enjoying his mother’s company. So we think that’s going to be the next big thing in the country. There are other pharmacies in America that do it, but not everyone. So we want to be on the forefront of it.”

Malone says he expects the company will continue to thrive. “I have some very good people who have been with me many years,” he says. “My goal, ultimately, is to have a sustainable company that will live on many years after I’m gone. So I’m still looking at acquisitions and how I can expand my business. Despite the competition, I wake up every day and my glass is half full, not half empty. So I want AllCare to continue to thrive and continue providing the service that we’re known for.”

He adds that he’s most proud of his company for giving him the opportunity to not only help people in the industry, but for also helping him to get involved in politics and serve as a state legislator alongside former president Bill Clinton. “I’ve been able to help write legislation and make a big impact in Arkansas about how we treat abused and neglected children,” he says. “I couldn’t have done the things that I have if I didn’t have people who helped me run the pharmacies, and a wife who helped me conduct research on how we can effectively help abused children.

“So working in the pharmacy industry has allowed me to reach out into other areas to help many poor people who didn’t have the same access to things as many rich people,” he concludes. “Being able to help those in need and being a voice for the voiceless has been very fulfilling, and this company has allowed me do it.”