“But we were mining all that information from our system on google docs,” says Natasha Fishman, EVP of marketing. “It was a cumbersome and time consuming operation to process our micro-influencers into a campaign.” 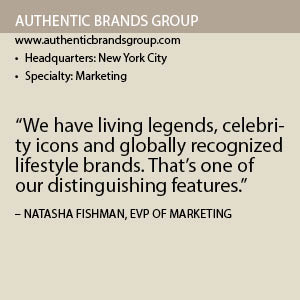 Winston was designed to build a community of social media influencers to help drive brand narratives and to shape each brand’s voice online. Winston powers influencer programs across ABG’s portfolio.

“It’s really been a game changer,” Fishman says. “We’ve been working with influencers for a long time. But this new platform has helped us streamline our process, increase our efficiency and find the right influencers to activate a campaign.”

When ABG first launched Winston, it had roughly 400 micro-influencers under its belt. “Today, we have about 1,700 with an aggregate following of 80 million followers,” Fishman adds. “Winston has helped us find new recruits.”

Influencers are judged by how many followers they have. However, ABG also judges them on based on if their followers are organic or artificial. There are companies that sell social media followers to celebrities, businesses and anyone who wants to appear more popular online.

Organic reach on social media is how well posts perform without any money behind them. In essence, it’s coming from real people instead of fake accounts.

“Our influencers have to come with a credible following,” Fishman says. “We’re vetting them to see if they have a paid following or if it’s organic.”

ABG does not approve influencers with a paid following to join its Winston platform. Here’s how it works: Influencers sign up for Winston through their personal Instagram account. They are reviewed by ABG and if approved, they are filtered and matched to campaigns and brands that they wish to support.

“We have living legends, celebrity icons and globally recognized lifestyle brands,” Fishman says. “That’s one of our distinguishing features.”

Its portfolio also includes entertainment legends such as Marilyn Monroe and Elvis Presley. In fact, Marilyn Monroe helped propel ABG into the national spotlight. She was the first major star acquisition for the company in 2011.

That means ABG owns the rights to her estate. A few years back, ABG helped bring the legendary bombshell back to life in a TV commercial for Chanel No. 5. Did we mention how many social media followers the deceased platinum blonde has managed to attract across her accounts on Facebook, Twitter, Instagram and others?

“Marilyn Monroe has over 15 million followers,” Fishman says. “When we acquired the estate, she had 250,000. We have grown her fan base and that growth is all organic.”

Founded in 2010 with the acquisition of the Tapout brand, ABG is a fast-growing company that is dedicated to identifying and extracting value from under-exploited assets via transformative partnerships that are unique to each transaction.

Dedicated to generating opportunities for natural brand extensions and reaching new audiences, its business development and brand teams drive growth for ABG and its portfolio.

ABG employs various business models to drive growth across its global ecosystem of partners with solutions that are customized by brand, category and territory.

Its community of digital influencers that create branded content and share it with their millions of followers is a large part of ABG’s digital marketing strategy – and Winston powers all of ABG’s micro-influencer marketing campaigns.

“Social media is a significant part of what we do here,” Fishman says. “It’s about connecting with people on an organic level. Our brands are managed across more than 140 social media accounts with an aggregate of more than 235 million social media fans.”