Back to Profile Gallery > Best Practices: In Store vs. Online 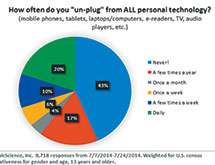 Plugging In To What Electronics Buyers Care About

The retailing of consumer electronics products in the U.S. is expected to top $211 billion in revenue in 2014, with 2 percent growth over 2013, according to the Consumer Electronics Association.

Whether shopping for tablet computers, smartphones, media playing devices, or other small electronics (particularly in new categories such as wearable technology), consumers benefit from omni-channel purchasing options. Fifty-eight percent of consumers value shopping for these products online, as evident from a recent study by CivicScience that measures matters most when buying personal electronics in stores vs. online.

The data allows us to compare the statistically meaningful differences between consumers based on how they answered either of the following two questions:

“When buying personal electronics in a store, what matters most?”

“When buying personal electronics online, what matters most?”

We are then able to mine the data from any other polling questions they’ve previously answered to paint a clearer picture about who they are in aggregate – and how they contrast from others.

Leading among the most-valued answer options for buying in stores, “seeing/touching the product” was chosen by 36 percent of respondents. There was no gender difference here, but we did find some interesting insights about this group. These shoppers tend to be more suburban than other respondents, more likely to tell others about new brands and technologies, and more likely to own an e-reader or tablet computer.

“Help from sales associate/service” was the in-store answer option that ranked second, with 23 percent of respondents. This group tends to be more female in number and be over the age of 35. They are also significantly less likely than the other in-store personal electronic buying groups to closely follow trends in this product category or to tell others about new technologies – which can explain the need for in-store consultation assistance.

Those who answered “taking home purchase that day” captured 14 percent of respondents, a segment made up of more men than the other response groups, as well as being younger (with more under age 35), and more likely to earn more than $125,000 per year. This group is more likely to own a smartphone, be addicted to their digital devices, and to engage in texting daily. They are also the group with the most respondents who closely follow trends in electronics and technology.

The remaining answer options – “act of browsing” (8 percent) and “ease of returns” (6 percent) – were the least popular options in terms of what consumers value when shopping in stores. Only 12 percent said they do not purchase personal electronics in stores.

For those who say that access to reviews matters the most, they are slightly more likely to be women, to be under 34 years in age, and to tell others about new brands and technology. They rank the highest among both in-store and online shopper respondents when it comes to ownership of tablet computers, smartphones, and e-readers.

Meanwhile, those who care most about easy price comparisons are more likely to be male, be 35 years or older, and to be a parent or grandparent. They are more likely than those valuing online reviews to say they are addicted to their digital devices but ironically, to also have a land-based home telephone.

The answer option of “convenience” gathered 9 percent of respondents, but the other options of “variety,” “lack of sales pressure,” “ease of returns,” “favorable shipping terms,” and “lack of crowds” were all in the 3 percent to 7 percent range.

Since it so easy to buy personal electronics products online, it makes sense to dig in further to better understand the 42 percent of consumers who do not buy in this way. They are more likely to be female (58 percent women and 42 percent men) and 72 percent of them are over age 35. Their smartphone ownership rates are significantly lower than the general population (42 percent compared to 65 percent), as is the case with tablet computer ownership (29 percent vs. 45 percent). They rank the lowest among all answer groups to both the in-store and online buying questions when it comes to following trends in electronics and technology (34 percent of them do this vs. 40 percent to 58 percent for the other respondents). As for shopping online in general, 58 percent say they never do this.

Market research that casts a wide net in collecting consumer behavior and sentiment data can deliver rich insights to inform marketing strategies for both in-store and online offerings and services. Understanding which segments of consumers are more likely to respond to, say, a “Take home today!” in-store incentive offer vs. making heavy use of online recommendations can lead to better segmentation of campaigns as well as more productive personnel training. Ultimately, that means better sales in a very competitive yet growing category.

Jennifer Sikora is vice president of market insights with CivicScience.