Back to Profile Gallery > Bioworld 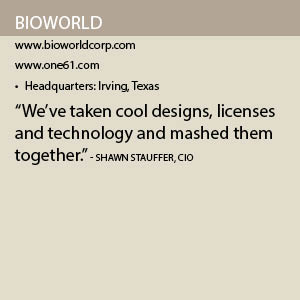 The Foundmi also works in reverse – users who have their keys but are looking for their phone can double-tap the device to ring their phone. In addition to its tracking capabilities, the Foundmi can also be used as a remote control for a cellphone’s camera, allowing users to take selfies from afar.

The smartphone app’s skins and interactive elements feature the character the device is patterned after. “We’ve taken cool designs, licenses and technology and mashed them together,” Bioworld CIO Shawn Stauffer says. “There are competing products on the market, but they’re basically white squares; we have really great designs that speak to the fans of Star Wars, DC Comics, Marvel and other popular brands.”

More than 100 Foundmi characters are available. “[The Foundmi products] allow us to create experiences like never before,” he adds. “With a connected device we can deliver richer content for fans to have a more immersive brand experience. We couldn’t do that with a standard product – technology makes all the difference.”

Foundmi is Bioworld’s first foray into technology. The company is a leader in licensed and branded apparel, sleepwear, headwear, bags and accessories geared toward young adults. Bioworld employs more than 120 dedicated product designers and has over 100 licenses with major entertainment partners including film studios, video game companies and comic book publishers. The company’s products are available in major big-box and specialty retailers nationwide.

“We are very strong in terms of our distribution channels and our ability to manufacture products,” Stauffer says. “We have a heavy presence in our sourcing locations as well as with logistics partners. We take care of everything – we’re a one-stop shop to get products to retail.”

Technology was a natural next step for Bioworld. “We realized that the game had changed and we understood that connectivity – and consumers’ and retailers’ demand for it – has become the new normal,” Stauffer says. “We weren’t a technology company before, so a lot of people asked us why we were doing this. We believe that if you’re not leading when it comes to technology, you’re catching up to it.”

Bioworld in 2018 is launching a new division, One61 Studio, focusing on technology-based products. One61 was formally unveiled during the Consumer Electronics Show in Las Vegas in January at booth number 44540.

One61’s initial product line will include smart wallets and luggage trackers, extending the Foundmi brand. The smart wallet features drop detection as well as sensors that will trigger the smartphone app to indicate when a credit or other card is removed.

The app will feature licensed characters, such as Captain America, who will tell users when their wallet is dropped or if a card is removed. “We’re building a story around protecting or finding the wallet based around the characters we’re using,” Stauffer says.

In addition to tracking products, Bioworld in 2018 will also launch Batman 1966 and The Flash-themed smartwatches that include the ability to dial and repeat calls to a smartphone, as well as sleep monitors and step counters. The smartphone app for the watch includes features and characters befitting their theme, such as The Joker taunting users if they haven’t reached their step target, and Batman capturing The Joker when the target is reached.

“We’re taking the concept of the smartwatch with the features the people would expect and putting our Bioworld spin on it by having nods to fans inside of the product,” Stauffer says.

The company is working closely with its brand partners to develop new products. “We’re leveraging our relationships with brand partners to do cooperative products and bring ideas to them for additional technology products,” he adds.

Bioworld plans to add new licenses and characters to its lines as well as launch new products based on display and illumination technology. “We want to create products that give users a rich, connected experience,” Stauffer says. “The more of these products that we can design, the greater value our retailers will reap.”