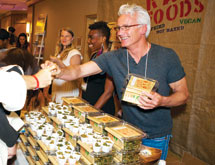 Gruno explains that he lost 40 pounds in the first three months, felt better, healthier, had more energy and his complexion cleared. Though he was sold on his new diet, he missed the familiar crunch of chips and other similar snacks.

Two-and-a-half years, 10 flavors of raw chips and crackers, five flavors of raw leafy kale and a dog line later, Brad’s Raw Foods is a $10 million-a-year business with 80 employees, a presence on the east and west coasts and big plans for continued growth and expansion.  “There are so many people who want to eat better, they want to feel better and they don’t mind spending a little more to get a great product that is good for them,” Gruno says.

The company also has a strong social media presence and a comprehensive website, with recipes, nutritional facts and other information. Its headquarters in Pipersville, Penn., has an educational center called The Chip Factory. “We hold raw food classes there, we have a juice bar and we have movie nights with educational offerings,” Gruno explains.

A book with Gruno’s recipes and his personal experience with raw foods will be available through Random House in January 2014. “The book is an education resource, with day-by-day instructions for a 60-Day diet cleanse using raw foods,” he explains.  “I saw a need in the marketplace after so many customers and loyalists asked me questions about how I switched to a raw food lifestyle.”