Braswell Family Farms prides itself on being involved in its employees’ lives.

When employees go through struggles at home, many companies want them to leave that baggage outside the office doors. There’s no time to deal with those personal hardships when deadlines are looming and customers are looking for a fast response. But more often than not, those home factors bleed into an employees’ work in one way or another.

The folks behind North Carolina egg producer Braswell Family Farms recognize that sometimes their employees need extra help coping with hardship. Five years ago, the company enlisted Corporate Chaplains of America to provide crisis care to employees 24/7. Workers have access to a chaplain who can help them manage grief, deal with home problems or simply act as a listener. 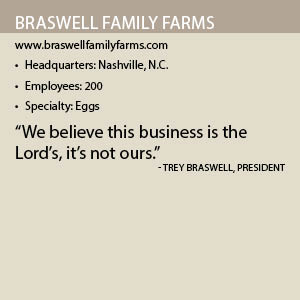 The program has improved employee happiness and morale while reinforcing the family-style culture Braswell Family Farms continuously works toward. “We appreciate those folks who chose to be here working with us and we want to be engaged in their life,” President Trey Braswell says. “Everybody has baggage, everybody has struggles. We try to provide resources to help them.”

Focusing on its employees’ overall well-being ties into Braswell Family Farms’ larger mission: to not only produce high-quality eggs but to work for God. “We believe this business is the Lord’s, it’s not ours,” Braswell says. “We run this business to have excess to give back to our employees and organizations we believe are doing good work out there.”

The Braswell family business began in 1943 when Joe and Eugene Braswell purchased a stone mill just outside Nashville, N.C. The company began producing corn meal for animal feed but soon started raising baby chicks, called pullets, and selling them to egg producers. It was the Braswell family’s first steps toward vertical integration, a process they continued when they later added their own egg production and packaging.

Today, the company has partnerships with about 40 family farmers in North Carolina and Virginia to raise about 2 million Braswell Family Farms’ chickens. With 1.7 million eggs laid each day, the company is the second-largest Eggland’s Best franchise owner and one of the biggest egg producers for the Mid-Atlantic region. It also produces eggs for the Natural Choice, Natures’ Finest, Land O’ Lakes and Born Free brands.

The ability to produce and control its own feed is one of the primary reasons Braswell Family Farms has become so successful with the Eggland’s Best brand. “Eggland’s Best has industry-leading standards when it comes to the operations side and they also have a patented feed formula which improves the nutritional value of the eggs,” Braswell explains.

It’s a legacy of quality that Braswell aims to continue after taking over as president for his father, Scott, last year and becoming the fourth generation of his family to run the company. “For him, it was a decision that he was ready mentally and physically to pass the baton, which was a really positive thing for the culture and the employees here,” Trey Braswell says. 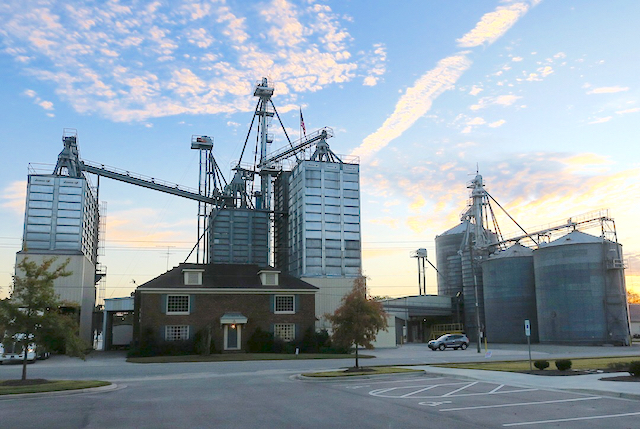 The company’s previous name change to Braswell Foods occurred about a dozen years ago but never really caught on. Suppliers continued to call the company by a myriad of different names depending on their industry and which segment of Braswell Foods’ business they worked with. The brand had no recognition with consumers, who saw it as just another food supplier. “When they did that there was a thought that we were going to diversify into other things,” Braswell says. “There wasn’t a lot of focus in building that brand and communicating it to our customers and consumers so it didn’t really gain traction.

Only a year after making the switch, Braswell Family Farms is already seeing results. Vendors have started calling the company by its proper name and they are getting a better sense of Braswell Family Farms’ story and history. As a company that predominately works with smaller family businesses, it helps Braswell Family Farms when their suppliers see they share the same values. “We show that every day in the work we do for them,” Vice President of Sales and Marketing John Watson says.

The brand recognition also has made headway with Mid-Atlantic shoppers, who have come to learn that the company is a locally owned egg producer. “Everybody is going local now and we have the ability to go local very well,” Watson says.

The name change and the association with being a local business have elevated Braswell Family Farms’ potential in its market. The company is taking advantage by refreshing its existing Natural Choice private label to incorporate the new branding.

The flexibility to introduce a new product or implement an innovation quickly is possible because, as a family-owned company, Braswell Family Farms lacks the layers of approvals and debate that are common at corporate competitors. That’s given the company a clear advantage over the decades. It was among the first egg producers to invest in cage-free eggs and it recently invested in a pasture-raised farm in Virginia.