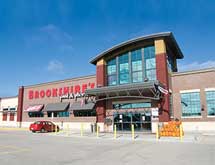 When Mr. W. T. Brookshire founded his first grocery store 80 years ago, he started a tradition in excellent, friendly service and low prices that continues today through the 156-store Brookshire Grocery Company (BGC). Even in this poor economy, Brookshire’s competes with the best of them and is taking steps to prepare for a future of growth.

“We have many years of experience with good times and bad behind us,” he said. “To get through these tough times, we need to stay focused on what we do best: providing uncommon value and exceptional service.”

Rayford said a great deal of the company’s profits are reinvested back into the stores, allowing the company to build new locations or replace outdated stores every year. Usually, the goal is to renovate or update eight to 10 stores each year to make sure they serve the current needs of their communities. In the last 12 months, BGC completed five remodels, built a replacement store, and launched a new location. Rayford said he and his team didn’t want to bite off more than they could chew, and for next year, they are looking at building two or three new locations and giving at least eight stores a little remodeling.

“We take each store individually and judge what needs to be done when so we can follow the movement and growth of the communities we serve. Flexibility is key because towns, cities, and people change, so even our brick and mortar stores need to be somewhat malleable,” he said.

Flexibility is the name of the game in today’s economy, and BGC is adding new features and services to respond to the needs of its customers. Doing so is easier today, thanks to the completion of a three-year SAP implementation process.

In 2006, the company began installing the financial component of SAP and followed that up the next year with the HR software. This year, it added the retail information software that now generates real-time data at the item level to help Rayford and his team make smarter decisions on pricing, product mix, and more. He said this integrated program is rare for a grocery chain of this size and was the first of its kind when the company started implementing it.

The new software enabled the company to ramp up its category management model. Now, BGC has 21 category managers interpreting the data to adjust selection, shelf placement, promotions, and pricing. Rayford said with every week the team gains more experience, and he’s thrilled by the opportunities the technology will create in the future.

“We’re seeing our consumers trade down to store labels, stock up on our advertised specials, and shop around to take advantage of specials at other stores. We pay attention to the data so we can always offer a great price for what our customers want,” said Rayford.

Early in the year, the company revamped its store brands program to create a third tier called Valu Time. Rayford said it’s a price-fighter brand designed to give customers the biggest bang for the buck, and so far, sales are high.

Another way Brookshire’s gives consumers greater value is the addition of pharmacies and gas stations to as many of its stores as is appropriate, an ongoing project that started in the 1990s. Rayford said the company has seen double-digit growth in the number of new prescriptions filled, and its fuel sales are up as well. He said Brookshire’s fuel will always be the lowest in the neighborhood.

Most recently, Rayford and his team decided to relaunch Brookshire’s loyalty program, the thank you card. Through the program, frequent shoppers get instant savings at checkout, access to electronic sweepstakes through their card, and special coupon offers, among other frequent programs. And Rayford said in the next 12 months, the company will roll out new package deals for members.

“That relaunch has been a key theme in all our advertising for the last few months, and membership is up,” he said. “It’s important to keep that program dynamic because it’s the best way we have to show our customers how much we appreciate their business.”

Despite the challenges of a poor economy, BGC has increased its training programs to help employees get up to speed, stay current on the new SAP system, and provide refresher service training that helps everyone stay upbeat in the face of gloomy economic news.

“Our people are great, and this technology is great. It’s just a matter of bringing the two together,” said Rayford. “I’m so proud of our people and how they’ve adapted to all these changes and taken on the challenges. Our success is directly attributable to the phenomenal people who work the floors and serve in our corporate office every day.”

One of the most popular new training techniques has been the weekly brown bag lunch and learn at the corporate office. Inhouse experts present a new facet or an interesting nuance of the new technology in place both in the office and in the stores, so everyone gets a broad understanding of how the system works.

Every district of the company’s stores has a dedicated training person who spends most of his or her time talking to associates about suggestive selling and educating them on products. Rayford also reinstituted a secret shopper program after a five-year hiatus, hiring a consulting firm to assess service in each location.

“The good news we’re getting from the program is that our people are doing a great job, and, although there are a few issues here and there that need to be addressed, there are no systemic problems we need to focus on,” Rayford reported proudly. In 2008, Brookshire’s won Texas Monthly Magazine’s Best Place to Work award for the fifth year running.

“Brookshire’s is owned by the third generation of the family who founded it, and the culture here reflects that,” he said. “We treat each other like family, and the prevalent attitude is one that we’re all in this together.”

The future of BGC will certainly be about continuing a legacy of service and value, but the latest chapter in this company’s history has another theme: eco-friendly practices.

BGC’s manufacturing division had the first certified organic dairy plant in Texas in 2005, and, in the last several years, the company has taken steps to conserve energy, such as reducing the lighting in the warehouses where possible and changing production schedules and equipment settings to lower-volume modes on nights and weekends.

Other energy-conserving measures the company has implemented include the replacement of air seals around doors in the perishable warehouse; all thermostats with new, smart, lockable units to save energy on weekends and off-hours; and traditional lamps with LED fixtures where appropriate. The company has also increased preventative maintenance of all A/C and refrigeration condenser and evaporator coils, which Rayford said are a major energy drain when not properly maintained.

Recycling and waste reduction are the other two primary focuses of Brookshire’s Let’s Go Green Together campaign. In 2009, so far, the company has recycled 19,639 tons of cardboard, 293 tons of plastic, and 190 tons of paper. At retail locations, collection containers are placed in front of stores to collect plastic bags and PET-1 bottles. In addition, all motor oil, used tires, old batteries, and scrap metal, including metal plates and engraving scraps from the company’s fleet, are recycled.

To reduce the waste materials that cannot be recycled, the company donates perishable food products that are safe for consumption to nonprofit organizations such as the East Texas Food Bank, Salvation Army, Catherine House, and Azleway Boys’ Ranch. Other food waste like ice cream is sent to local hog farmers. All in all, these measures defer more than 82,000 pounds of food from ending up in the landfill.

There is a lot more to BGC than grocery sales, but Rayford maintains that everything he and his team do comes from the wants and needs of the customers who have kept the company in business for nearly a century.