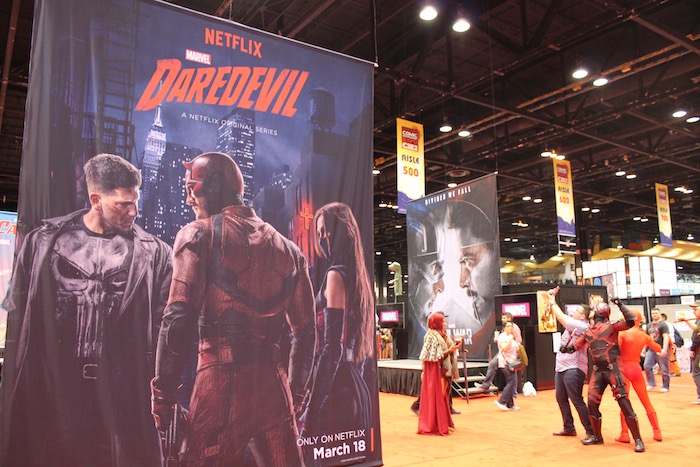 C2E2 brings fans together for a weekend filled with costumes, comics, pop culture, art and celebrities.

The high ceilings and long halls of McCormick Place are brightly illuminated by a rare warm, sunny day in March. As I walk through the lobby, I spot Deadpool and Captain America taking a selfie together, while Rey from Star Wars: The Force Awakens checks her iPhone, sitting on the edge of the lobby’s fountain. Riding up the several sets of escalators, I pass Dana Scully, Jon Snow, Sailor Moon and countless other characters.  As I rise up, the giant red letters greet me, and I know that I’m home: C2E2.

Chicago’s Comic and Entertainment Expo, better known as C2E2, took over Chicago’s McCormick Place March 18-20. I’ve attended the convention for the last five years as a fan, so it was interesting to experience it outside of costume – for the most part.

C2E2 laid out the red carpet – literally – for the fans to walk the expansive exhibitor hall, where they visited more than 450 exhibitors and 464 artists in Artist Alley. I picked up a few books from Valiant Comics (including the increasingly popular “Faith” comic series), grabbed an Agent Carter Funko POP from the Marvel section and admired the Game of Thrones house sigil flags that decorated another booth.

C2E2 also supplied a plethora of amazing comic and entertainment guests in the autographing and photo-op section. Guests like John Cusack, Gail Simone, Edward James Olmos, Melissa Benoist, Chris Claremont and John Ratzenberger met with fans all weekend, and many participated in panels, where fans were able to ask their most pressing questions.

Chloe Bennet, who plays Daisy Johnson on Marvel’s Agents of S.H.I.E.L.D., was another C2E2 guest, so I donned my own Daisy costume for our photo together. Bennet was as equally thrilled about my costume as I was to finally meet her. In addition, I attended her panel, where she discussed behind-the-scenes antics, the importance of Asian women representation on television and how taxing her stunt work can be. At the end of the panel, she took photos with eager fans clamoring around her – including myself.

But most people who come to C2E2 are there for the wide variety of costumed heroes and villains. Saturday night, the convention hosted its Crown Championship of Cosplay competition, where 38 cosplayers from all over the world competed for the title and $10,000 prize. The contestants were judged for their craftsmanship and skills by a panel of celebrity judges working in film and television. In the end, Major Sam Cosplay from Australia, dressed as Julieta Necromancer, took home the title as Crown Champion of Cosplay.

“This was an amazing event and it was really fantastic to have all of our international winners from this past year compete against one another at C2E2,” said Lance Fensterman, global senior vice president of ReedPOP. “As cosplay continues to become more mainstream and global, this competition really brought out the best of the best and showcased some outstanding costumes to fans at C2E2 and through our livestream.”