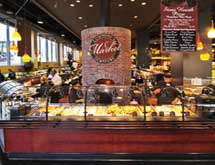 Value isn’t a one-way street heading straight to cost savings, especially in the grocery industry. Value also includes customer service, quality, and freshness. These are the tenets upon which Cosentino’s Food Stores was developed 61 years ago when Dante Cosentino bought a local market. A famous ecclesiastical Kansas City artist, Dante’s skill set was in painting, but his expertise was in taking care of people, which has been passed down from generation to generation.

Dante’s sons and daughters grew the business from one small market to a company of 25 full-service grocery stores. Although the company is currently led by the second generation, the first generation is proud to watch the third generation of family members now taking part in the day-to-day operations and management of the company.

As a member of the second generation of Cosentinos to be in the family business, John Cosentino, co-owner, said he grew up hearing stories about how his grandfather, father, uncles, and aunts built relationships with their friends and neighbors. “If someone needed food and couldn’t afford it, the Cosentinos would take care of them,” he said.

“That’s how they built such a strong relationship with their customers, and that’s how they started growing a name for themselves down the road based on the service they delivered and the actions they took,” he continued.

Today, Cosentino’s Food Stores comprises 25 locations, and ownership is shared amongst the eight members of the second generation of the Cosentino family. Don Cosentino, co-owner and cousin to John, said quality and service would continue to be the primary focuses of the company as it moves ahead.

“We’re known for our perishable departments,” he said. “Service is why we’re in business, and quality is what we’re known for. We will do just about anything to make sure our customers walk out of our stores happy.”

Options for one and all

Under the Cosentino umbrella, there are four store brands. The company’s main banner is Price Chopper, which constitutes 17 of the company’s 25 locations. Price Choppers focus on price and value, quality and freshness and are larger than most of the other stores at between 50,000 and 76,000 square feet.

Next are the Apple Markets, of which there are four. These are smaller neighborhood stores that range between 10,000 and 25,000 square feet. The Sunfresh stores promote quality and freshness first and price a close second.

The company’s newest brand is called Cosentino’s Market, of which there are two. Cosentino’s Markets are niche gourmet food stores. One is located in Brookside, an eclectic neighborhood in Kansas City, Mo. The second was opened in downtown Kansas City as part of an $850 million entertainment district project. “We were so honored to be chosen as part of this historical project and to have the chance to develop such an innovative store,” said John. “We dedicated that store to my grandfather and painted food art in the store on the ceilings in the style he used.”

John said the company’s growth has been through both acquisitions of other retailers as well as through new development. The new 76,000-square-foot Price Chopper location is one of the company’s largest openings to date and is focused on prepared foods and perishables. “The reception we’re getting from the community is amazing,” said John.

The focus on quality, price, and customer service hasn’t changed since Cosentino’s Food Stores began 61 years ago, but the strategies to ensure those tendencies continue have. One of the ways in which the company maintains a handle on price is through its Associated Wholesale Grocers membership. AWG has five warehouses throughout the US and enables its members to compete with the bigger national chains.

“There are more than 700 grocery stores that run through AWG, which means we get the benefits of that buying power to keep our prices competitive,” said John.

Cosentino’s Food Stores also uses private label brands in its stores. These brands include Best Choice, the premium private label, and Always Save, a high-value private label. But according to John, the marketing the company does through its circulars is what has made the biggest difference as competitors have crept into the Kansas City market.

“We send out 800,000 circulars a week to people with both three-day and seven-day ads,” he said. “We created the best ad program to generate interest in coming to our stores.”

Unlike other big chain grocery stores, Cosentino employees are expected to treat their vendors like their friends. “Having a good relationship with our vendors keeps us flexible to better service customers,” said John. “We treat our vendors with the utmost respect.”

Employees also take pride in the fact that they’re active members of the communities in which they work. “We’re locally owned, our kids go to school in the community, and our friends and neighbors shop at our stores,” said Don. “We’ve grown up with a service and quality attitude.”

Most of Cosentino’s Food Stores’ competitors are not headquartered in Kansas City, which means they don’t have that same personal touch. The Cosentino name has been in the area for decades, and its reputation has grown alongside its stores. “Our customers are our friends and neighbors, and we try to take care of them,” said Don.

“People say you can’t do everything for everyone, but we certainly try,” said John. “It is our mission to offer our customers service, quality, variety, and freshness, and we do it at a very competitive price.”