Back to Profile Gallery > Curious George 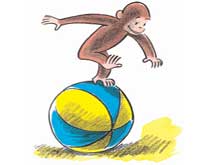 Curiosity didn’t kill the cat; it created a monkey, and a very popular one at that. First published in 1941 by Houghton Mifflin Harcourt Publishing Company, the character of Curious George has delighted children and adults for the past 70 years by appealing to one of the most intrinsic components of human nature. “What you hear from fans of Curious George is that he’s appealing because he is childlike in the way he explores the world through trial and error,” said Maire Gorman, VP of sales and children’s marketing at Houghton Mifflin. “That’s why so many parents feel he’s a seminal character in terms of introducing a child to the world and explaining that it’s okay to make a mistake because that’s how you learn.”

While it’s amazing for a children’s publishing character to have maintained his popularity for as long as he has, it’s even more amazing that Curious George almost didn’t make it to print. Hans and Margret Rey developed the character in a chateau outside of Paris in May 1940. When the Nazis invaded Paris, because they were German Jews, they had to escape without the luxury of transportation.

Using some of the ingenuity that comes through in the character of Curious George, Hans fashioned two bicycles for he and his bride, and the couple left their retreat with nothing but the clothes on their backs and whatever would fit into a knapsack. One of the things that made it in: the manuscript of Curious George.

After a yearlong journey through Europe and checkpoints where they were carefully inspected, the Reys made it to New York. By the end of 1941, the first book in the original series, “Curious George,” was published. “Seventy years of a character, brand, and personality that grandparents and parents continue to share with their kids almost didn’t happen,” said Gorman. “It’s an amazing story to me, and it’s one of the many reasons we’re so focused on doing what’s right for the brand.”

Look before you leap

In 1997, doing what’s right for the brand meant finding a partner to develop new Curious George content for the consumer market. Amy Taylor, EVP of Universal Partnerships & Licensing, said because of the brand’s rich history, before jumping into any licensing deals, the two companies focused on developing content that would bring the lovable monkey to a new audience while staying true to his curious nature.

“Curiosity leads to learning, and that was what we looked at,” she said. “Before putting pen to paper to develop a TV show or movie, we delved into the brand heritage, looked at what made George an enduring character and what  attributes he brought to the table, and laid out a timeline of how to introduce new products into the marketplace.”

When Universal Partnerships & Licensing’s partnership with Houghton Mifflin began, Curious George had been primarily an upstairs and specialty-market brand. There were approximately 15 licensees involved, only a handful of products in the market, and no brand style guide.

The two companies worked together to develop a style guide that looked like the drawings the Reys put together in their first books and kept the brand in the specialty market atmosphere. But in 2006, Universal launched a film and shortly thereafter a TV show with PBS Kids, and the companies began opening up the brand.

To start, Universal Partnerships & Licensing developed a toy line that continues to expand today. It also developed a partnership with I Can Do That! Games and developed a game line built on the message of learning through curiosity that fans expect from Curious George.

“As we got closer to the launch of the movie and the TV series, we started developing mass market merchandising programs and went to each of the key retailers to showcase the property,” said Taylor. “Even today, we look at how our partners bring what Curious George has on screen to life in their products and displays.”

To say the Internet and social media play a key role in building brand awareness is an understatement, which is why neither Universal Partnerships & Licensing nor Houghton Mifflin hesitated to combine forces and create a super-site landing page for Curious George to aggregate all brand information.

From publishing to licensing, TV, movies, and videos, all things Curious George can now be found at www.curiousgeorge.com, which launched in 2009. In addition, Curious George has his own Facebook page with nearly 200,000 followers. Gorman said Houghton Mifflin’s book-marketing group is focused on social media as it relates to Curious George, and it uses social media to talk about the company’s costumed character appearances when they happen locally.

“Hans Rey was on the cutting edge during his time in terms of how he thought of children’s publishing and interactivity. He created some of the first novelty formats,” said Gorman. “I find it a wonderful synergy that Curious George was one of the first characters we very actively started to promote using social media. Hans would be very impressed by what we do to share the message about George.”

This collaborative online approach to building the Curious George brand is unique, but both Gorman and Taylor agree that each company acts as a steward of the brand and is focused on doing what’s right for it rather than haphazardly picking products to push. “The nature of the property is evergreen,” said Gorman.

“Our publishing program is ongoing, and Universal’s devotion to the character and new content is ongoing. We’ve been in this wonderfully collaborative relationship for almost 15 years now, and it will continue going strong into the future.”

Curious George turns 70 in 2011, which means celebration is in the air at both Universal Partnerships & Licensing and at Houghton Mifflin. The companies jump-started a year of celebration in 2010 by giving their retail partners deluxe retail birthday party kits that included an oversized copy of the original story, party gifts, and games.

In the fall of 2010, Hough-ton Mifflin sponsored 70 events around the country at major libraries and bookstores to celebrate Curious George’s 70th birthday while Universal Partnerships & Licensing developed some yearlong retail-anchor partnerships to extend the programs.

“We partnered with Pottery Barn Kids and developed a nice program to bring Curious George into its stores and catalogues for the first time with a line of kids’ room and nursery products,” said Taylor. “We also partnered with the Library of Congress and the Advertising Council to use the Curious George brand to promote reading to children.”

By keeping Curious George’s core message of learning through curiosity at the heart of all of their movements, both companies ensure the integrity of the brand will not be lost and that for years to come, fans will continue to find comfort at the hands of the world’s most memorable monkey.

“Tastes change, and people move on, so for a character of this nature to have stayed in print speaks to the inherent strength of the stories and art the Reys created,” said Gorman. “It stands the test of time, and that’s hard to do. It’s deceptively simple.”