Back to Profile Gallery > Earth Island 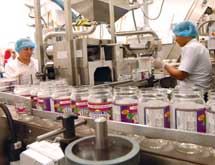 Bob Goldberg and the team at this food manufacturing and distribution company believe in their mission to bring vegetarian, all-natural, and organic food to the country. In the 1970s, there were four friends who ran a lunch bar in a Canoga Park, Calif. health food store. When the owners decided to sell the store, the friends bought it and created one of the first strictly vegetarian food stores. Two of those friends went  on to run one of the fastest growing natural, organic, and vegetarian food manufacturers in the country today.

Follow Your Heart, the once-tiny health food store, now makes $5 million annually selling food products and serving breakfasts, lunches, and dinners seven days a week that are 100% vegetarian and all-natural or organic. Earth Island is the manufacturing company. It originally produced food for sale in the store, but since its inception in 1988 has grown to roughly four times the size of its parent company.

Bob Goldberg, Earth Island’s president, said when he and his partners established the company, no one predicted they would be able to make money selling all-natural, organic, and vegetarian food products, but all along, they were dedicated to following their hearts.

“By narrowing the niche we served first at our store and then at Earth Island, we provide a safe haven for vegetarians and people who demand the highest quality and most natural foods for their families. They never have to check the labels or think twice before buying an Earth Island product,” he said.

Following its heart has paid off for the company: for 12 years, it has averaged 27% growth and last year enjoyed 34% growth. The company produces and distributes Vegenaise (also known as Veganaise), a vegetarian mayonnaise; a line of organic and all natural salad dressings; and Vegan Gourmet, a brand of dairy-free cheeses, cream cheese, and sour cream products.

Earth Island started making these products in a 2,500-square-foot facility, slowly expanding through the years to the 24,000-square-foot facility it occupies today. Just a few weeks ago, the company purchased another 18,000 square feet of space. The roof of the main building is covered in solar panels, which provide most of the energy the facility demands. Goldberg expects the company will cover the new building with solar panels as well.

“Everything we do boils down to one thing: does it feel right to us? From the beginning, we’ve always followed our hearts, and that has never steered us wrong,” he said.

Goldberg boasts that Earth Island has a 99% fulfillment rate of orders and that the company maintains a consistent lead-time of only two weeks before shipping them. That’s because all of its products are refrigerated perishable items with shelf lives ranging from nine months to just 10 days.

Because of this constraint, as Earth Island has grown, it has had to develop exceptionally efficient manufacturing management processes. Goldberg said he and his team developed them slowly, but since the company moved to its much larger location in 2003, they have ramped them up.

Earth Island now has full-time employees managing various requirements for organic and kosher certifications in addition to FDA and state approval. The company is also growing its inhouse quality control department, reducing the time and effort required to send products to outside labs for testing.

Thanks to careful data tracking over the last several years and a reliable promotional schedule, Earth Island can accurately predict months in advance demand for specific product lines. That helps it keep its suppliers well informed and has helped the company develop its own inventory management software.

“We’re in the awkward teenage phase when our processes are too complicated for basic, over-the-counter manufacturing software, but it would be too costly to design our own fully integrated system,” Goldberg said. “We came up with a nice compromise: we hired a local consultant to develop a system that managed pricing fluctuations and then integrated that with our inventory database.”

Goldberg’s goal for Earth Island is to increase its penetration into more supermarket chains. To that end, he plans to devote more marketing dollars to direct-to-consumer advertising, which Earth Island has done very little of until now, because it could never handle that kind of demand. “We’re not trying to rush anything. We’ve spent the last several years buffing up our manufacturing capability and management systems, and now we feel ready to handle more growth,” Goldberg said.

There are many natural and organic food companies that will soon by vying for shelf space in mainstream distributors around the county, but Goldberg said Earth Island has several key differentiators that will bring it success.

One is the personal way it conducts business. Goldberg explained that although price is a key factor in choosing supplier partners, he likes to work with genuinely good people and form long-term, personal relationships.

“Life is too short to work with people who aren’t fun to work with or to only work with your partners on a transactional level. All our suppliers understand that we rely on each other for success, so it’s easier to work together. Things run pretty smoothly around here,” he said.

Another differentiator is how close Earth Island is to the end users of its products. Having one foot in the retail world and the other in manufacturing gives the company a unique perspective and keeps everyone focused on its real customers: the families eating the food they make.

The third, and perhaps most important, differentiator is the company’s relationship with its employees. Goldberg said Earth Island places a heavy emphasis on hiring the right people, and it hires them for keeps. In the last few years, he and his team have invested in consultants and programs to improve inter-department communications and worked to understand everyone’s working styles. But one thing the company hasn’t had to do is figure out how to motivate its employees.

“Something happens when people start working here: they buy into a culture of personal commitment and responsibility. We have a completely open office, but most of the time all you hear is the clacking of keyboards as people are working to do the best job they can. I think it’s because we are making a product that we all believe in, and that is the most fulfilling kind of work there is,” he concluded.