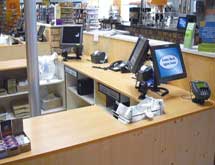 For more than two decades, this company has provided retailers with the software solutions and service they need to maximize their efficiencies. At the beginning, ECR Software Corporation (ECRS) was a small software company built to deliver retail automation solutions by delivering on promises made to customers and employees. That commitment allowed this Boone, NC company to grow to include 70 employees with a network of salespeople, support technicians, and installation specialists around the country.

“We specialize in high-volume transaction retail—grocery stores, health food stores, C-stores, and pharmacies,” said Peter Catoe, owner and CEO. “We automate not only the front end but also the back of the store, we do inventory control and automatic replenishment, and we do headquarter automation so multi-site customers can control their stores from a central office.”

The company is housed in a building across from Appalachian State University, where Catoe went to school. The building was a former Ford dealership built in the 1930s with rafters made by Carnegie Steel and high beams made by Bethlehem Steel. When ECRS found the building, it was in very poor shape. Essentially gutting and restoring it, ECRS got off the ground by showing the same can-do attitude in building its headquarters it has shown ever since in building its retail automation solutions.

Supplier integration has become one of the company’s most important offerings. If a store or headquarters submits a purchase order, the ECRS Supplier Gateway service will send it to suppliers electronically. When the supplier sends it back out, the order is automatically updated in the ECRS system. Catoe said it’s a powerful system that can be scaled to suit large and small retailers alike. It was built to provide independent retailers with same automated technology used by big-box chains.

“I think our EDI system is revolutionary for our industry and our customers because a lot of our customers are smaller and don’t use EDI now,” Catoe said. “When they use this technology, it puts them on a par with larger retailers by essentially using the Supplier Gateway to provide a lot of your labor to keep your data updated.”

For instance, when a supplier ships something to a customer using the ECRS system, the EDI supplier integration solution automatically updates the customer’s system with the correct cost and on-hand quantities, alerting the manager when cost changes occur. The manager isn’t replaced, but a lot of the labor is replaced so managers can focus on analytical work instead of labor.

“We also have our new self-service component, where we’re supplying self-service systems to retailers who normally wouldn’t have access to that technology,” added Catoe.

The company’s technological innovation comes from investments of up to $2 million per year in new product development. Catoe said a new dynamic promotion system and executive dashboard will be launched sometime in late summer, and the company is incorporating a new level of redundancy for disaster recovery.

“We already have a very good disaster recovery system, but our new IT-based system will allow us to keep running in almost any condition,” he said.

Technology isn’t the sole reason this company has continued to grow since its founding in 1989. About 30% of its business comes from referrals, so ECRS has been careful about selecting specific vertical markets, building a strong presence, and producing results.

ECRS also gets involved industry events, but the main route to successfully serving customers is learning their requirements and building solutions in a generic way so similar customers can use similar functionality.

“We have the same code for all customers; we don’t write customized codes,” said Catoe. “That has an accumulated building affect because whenever we add a significant customer, the application’s functionality grows and is shared by all our customers.”

The company also has an electronic Internet-based support system, so customers can call in for support or log in and communicate with ECRS via automated ticketing systems. Customers can monitor the progress of support requests online. Version updates, news, and alerts are also posted through this Web-based customer dashboard.

Right now, ECRS is mostly focused on its current vertical sectors, the biggest of which are pharmacy, grocery, and natural products. However, Catoe said the door is always open for new opportunities.

Although the company has shown itself to be a resilient success, profitability isn’t the only force behind its existence. Catoe sees ECRS as a means for employees to have a large impact on people outside of the company. The company targets certain charities and causes to support, many of which revolve around helping children. These include Western Youth Network, The Children’s Playhouse, Watauga Education Foundation, and many more. The company has also supported the Maison Fortune Orphanage in Haiti for about seven years. After the recent earthquake, more support from ECRS will be needed in Haiti.

“The orphanage wasn’t struck, but they’re going to get a lot more kids, and food prices are going to escalate,” Catoe said. “That organization was doing great things before the disaster, and we will continue to do what we can to help kids, in Haiti and locally.”

With the company continuing to invest in technology and R&D, Catoe said development of new solutions over the next 24 to 36 months would allow ECRS to grow for many years to come. In fact, the biggest challenge for ECRS will be handling growth.

“In 2008, the company grew by 95%, holding the line in 2009. In 2010 and 2011, we feel like we’re going to grow again and that 2011 will be a big growth year for us,” said Catoe. “Our focus is on building internal systems and products that will allow us to grow without having to exponentially increase our costs.”