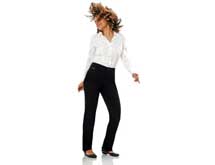 After a change in ownership, this company was able to regain financial strength and reposition itself in the denim market. FDJ French Dressing has built a strong reputation throughout the years. This became especially significant when, in June 2008, the company experienced financial turmoil and was forced to file a notice of intent to file for bankruptcy. According to CEO Noah Stern, who brought the company out of bankruptcy with his partners, it was this strong reputation that saved the organization from dissolution.

“My partners and I had admired FDJ from the side for many years. It has always been a very well respected brand,” said Stern, who partnered with Corwik Group to purchase the company in 2008. “It catered to a demographic that was similar to that of our other companies, and we shared a few sales agents, so we knew the market well. We knew it was a growing market, made up of individuals with a high amount of disposable income.”

Still, Stern and his team knew many changes had to take place if FDJ was to regain financial stability. After laying out an action plan, the new owners set forth three objectives: reduce overhead costs, increase quality levels, and reorganize the sourcing infrastructure.

Stern explained that the company really needed to be rebuilt from the top down. The operating structure in place resulted in an overwhelming amount of unnecessary overhead costs. The facility it operated out of, for example, was much larger than it needed to be, which meant the company was spending a lot of money on space it didn’t use. When Stern and his team took over, they were able to leverage the infrastructure of their other companies to achieve economies of scale and synergies; everything was brought under a single umbrella, leading to a significant reduction in FDJ’s overhead costs.

The second and third objectives Stern and his team laid forth were closely aligned—they hoped that a restructured sourcing network would ultimately lead to improvements in product quality. Stern explained that the process began with an assessment of the company’s value proposition.

“The value wasn’t where it should have been,” he said. “It’s really a value equation. It’s one thing to offer great value and take a lower margin, but it’s entirely another to have that low margin without great value.”

As a denim supplier, FDJ has two options when it comes to placing orders: the company can work through independent agents, or it can send its own team to the factories. Up until 2008, FDJ used agents, but this changed when Stern and his team took over.

“Agents make a commission on every garment they make,” Stern explained. “You give them your specifications and fabrics, and they’ll go out and source the factory, buy the materials, and ship the garments to you when they’re ready. The cost of commission is less than the cost of maintaining your own quality control offices and staff, but when you use agents, it’s almost as though there is a conflict of interest. They’re expected to ensure quality, but they’re also motivated to ship and every unit, since they earn commission for each one. If you order 100,000 garments, they want to ship out 100,000 garments.”

Stern and his team already had quality control offices in place overseas, so when they decided to stop using agents, all they had left to do was recruit denim specialists.

Today, FDJ is thriving and poised for long-term success. Moving forward, Stern and his team plan to continue to focus on what has made them successful this far. He breaks the brand down into four pillars: fit/quality, giving back to the community, customer service, and distribution. “Jeans are a technical product, and the fit is really important. Our products require service. We want each to be sold directly to a consumer by a retailer that understands how to make a woman look beautiful in a specific fit. This is why we only work with boutique stores and independents,” Stern said, explaining how the first and fourth pillars intertwine.

In terms of the second pillar, giving back, FDJ is especially committed to raising money to benefit those affected by breast cancer. The company has donated more than $3 million to the cause in the last six years through a series of annual events. Each October, it rolls out a trademarked campaign called Try the Fit, Help the Cause. Many of the 2,500 of the boutiques that carry FDJ jeans participate in the event, which works like this: every time someone tries on a pair of the brand’s pants, the company donates $1 to breast cancer.

To raise awareness of everything at FDJ, the company has invested a significant amount of capital on marketing. “Most brands in North America spend between 1.5% of 2% of net sales on marketing, but we’ve recently been spending closer to between 8.5% and 9%,” Stern said.

“We do some advertisements, but most of our effort is focused on engaging customers through grassroots initiatives like our FDJ fit clinics,” he added. “We send fit specialists into the stores and help customers find the perfect-fitting pair of jeans. This allows us to directly interact with customers, and it drives business into retailers’ doors. We’ve held events where we sold 95 pairs of jeans in a four-hour period.”