Back to Profile Gallery > Freeman Beauty 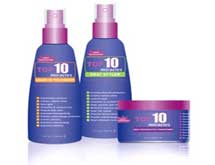 Once again under family control, this hair, skin, and foot care company is reaching out to retailers and across the ocean, spreading the gift of beauty. The story of Freeman Beauty began 1915, but in the past six years, the company has undergone significant growing pains. That’s the point that Larry Freeman, founder of Freeman Cosmetic Company, bought his company back from the Chicago-based private equity firm that had been slowly damaging its credibility.

It wasn’t that the company was producing bad product. In fact, the same quality ingredients and processes Freeman and his brother founded the company with in 1976 remained, and the company’s consumer franchise was still going strong. But for a retail supplier, greedy attitudes threatened and even destroyed many of the partnerships the family had built over the years.

“We have not completed the circle of getting all the distributors back that we used to have,” said Freeman. “Time, patience, and doing the right thing will get us back to where we were, but it’s a very slow process.”

Throughout 2008, Freeman Beauty saw across-the-board growth of 10%. Freeman said the impetus behind this growth was, in part, due to the company’s ability to get more retailers to understand the Freeman family was back in charge. “We’re no longer owned by a multinational company that runs on a different wavelength, nor are we run by a private equity company that is in the business only to rig the product line and get money out of it,” Freeman said.

“We are trying to communicate to the trades that the commitment that built our company and made us a major player in the niche beauty world for is back,” he continued. One of the messages Freeman Beauty is sending is that it’s not the biggest business on the block and, as such, is willing to go the extra mile for the retailer, particularly in the way it partners on advertising.

For example, when a major multinational corporation runs an ad on a particular product, it often costs the retailer between 5% and 15% on each product sold. When Freeman Beauty runs an ad with a retailer, the retailer makes its normal margins, and the company pays for the ad in the redemption.

“By adding SKUs of Freeman products, retailers will make money,” said Freeman. “Because the products are niche oriented, the retailers can bring more customers into their stores.”

Innovation has also played a role in the growth Freeman Beauty has seen in recent years. Building on its original concept of incorporating the most natural ingredients possible when making its hair, skin, and foot care products, the company has kept a low price point in mind when rolling out new products.

The company ventured into the organic world in the past few years with its Goodstuff Organics products. Although priced a little higher than most of its products at $7.99, Freeman’s organic products are still $5 to $10 less than many organic products on the market.

The 60 Second Solution line, which is geared for those looking to style their hair without a hassle, includes mousses, sprays, and gels and cuts drying time without the use of alcohol. As with Freeman Beauty’s other product lines, the 60 Second products cost as little as $4.99. And in the foot care world, Freeman Beauty remains a niche leader with its BareFoot product line, which Freeman said is number one in its category with prices as low as $3.99.

“In the health and beauty world, consumers are looking for more value,” said Freeman. “We’ve become more important to retailers because we’re a good value, retailers still make full margins, and we’re paying for the ads. That’s how we built the business, and that’s what we’re going to do again.”

Freeman Beauty’s expansion in recent years has not been limited to the US. In Canada, the company has seen 70% growth in the past year, and its numbers in Mexico are just as impressive. Freeman said much of the interest starts with distributors shopping in US stores that see the Freeman line of products, and one of the company’s top international hot spots is Russia.

“Russians love the niche we fill in that we are in the natural and organic market and we’re priced right,” said Freeman. China is also a growing market for Freeman Beauty, as are the Czech Republic, Albania, and Romania. German distribution is also growing, and the company recently started doing business in Malaysia.

“Our prices are significantly higher than they would be compared to US, but our use of papaya, avocado, peppermint in our product lines interests the international consumer,” Freeman said. “We expect international to grow 25% this year.”

Although it’s been difficult to get the word out about Freeman Beauty due to tightening budgets and a downturn in the economy, maintaining a consistent message has helped the company. Since the 1970s, the message behind the company’s products has remained the same: the Freeman Family creates natural and organic products that you like at a price you can afford to pay.

“Our major project at this moment is to make sure the consumer can find our product,” said Freeman. “We’re in business with almost every major retailer in the country, but we’re still missing a couple. Our job is to show them we’re true partners to make sure consumers can find Freeman Beauty products wherever they shop.”