Back to Profile Gallery > Gerber 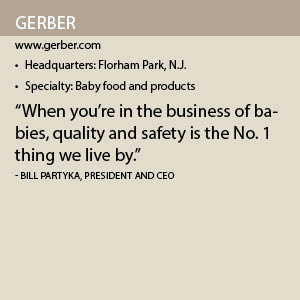 That same year, the company held a contest to find a baby picture to use in its advertisements. The winner was a sketch of Ann Turner Cook by artist Dorothy Hope Smith. Turner Cook would become known as “the Gerber baby.”

Ninety years later, Gerber is a global leader in baby food with business in the Americas, Southeast Asia, the Middle East and China. Now owned by Nestle and headquartered in Florham Park, N.J., Gerber celebrated its 90-year anniversary in 2017. In its effort to always innovate, it also rolled out a strategic initiative to contemporize its business model to appeal to today’s millennial’s and tomorrow’s Generation Z consumers.

President and CEO Bill Partyka explains that Gerber’s strategy is built on three beliefs. The first is that all babies deserve the highest standards set just for them. “If you look at most nutrition standards set by the government, they are for older children and adults,” Partyka says. “We know that babies have a completely different set of nutritional requirements.”

Secondly, Gerber believes that good nutrition beginning in the womb and continuing through the first two years of a child’s life is the foundation for long-term health and well-being. “The whole idea of providing good nutrition early in life has to be at the core to ensuring future generations get off to the best start as possible,” Partyka says. “Finally, we believe that breast-feeding and breast milk is best for babies. While we’re in the infant formula business we are totally committed to promoting breastfeeding because we know that is the best start for babies.”

Ultimately, Gerber’s overall goal is to bring the cleanest, greenest and most transparent products to the marketplace, Partyka adds. “We believe what sets us apart is our multi-generational relationships with family farmers,” he says. “We have, what I call, a positive control supply chain. I know what was planted, how it was grown and how it was produced in our kitchens before it ever makes it to baby. We also know that when you’re in the business of babies, quality and safety is the No. 1 thing we live by. We have high-quality, safe products that are designed with the nutritional requirements of a baby in mind.”

Gerber is more than half way through its brand transformation, which began in late 2017, and includes an updated logo as well as new packaging. “The final phase of our packaging transformation will be on the shelf at the end of first quarter,” Partyka says. “We just launched our new ‘anything for baby’ messaging on TV and digitally. We are also expanding our product offerings to include more contemporary flavors, and are focused on providing clean recipes including organic and non-GMO offerings.

Gerber is not only changing the way it looks, including an update to the iconic baby head, but also changing the way it communicates with its consumers. The company rolled out a new platform on its website called Dottie, named in honor of co-founder Dorothy Gerber. Dottie is a personalized consumer communication system that allows consumers to interact with Gerber’s timely information and resources 24/7.

“It encompasses all of the things that parents, especially first-time parents, have to deal with,” Partyka explains. “For example, parents can get the most out of our recent advice on early childhood development and crying. Many parents engage with our ecosystem to understand and set expectations for how they can care and provide for a growing baby. It’s a very powerful consumer relationship that is delivered the way today’s consumer wants it, which is normally via smartphone.”

Dottie was launched nearly six months ago and Gerber is seeing positive results thus far, according to Partyka. “We’ve been measuring our interactions with consumers and we’re getting a 98 percent liking score from the consumers who engage with us,” he says proudly. “So they are really enjoying the service we’re providing.”

Additionally, Gerber launched a premium direct-to-consumer e-commerce store called thegerberstore.com in October 2017. “It’s a great way for consumers to get the assortment of baby food products they want delivered to their doorstep,” Partyka notes.

He adds that Gerber recently became the No. 1 baby food brand on the largest e-commerce platforms in China. “We just finished a big event in November with all of the major e-commerce platforms for the Double 11 event, or Single’s Day,” he says. “It is the single biggest online retail event in the world. It’s a great way for us to deliver our transformation to the Chinese marketplace where consumers are really receptive to new brands.”

Gerber’s partners have played a critical role during its transition. “We believe that to be successful everyone along the value chain has to be committed,” Partyka says. “At the core of our business is our multigenerational relationships with farmers, which is really the root of the Gerber brand.”

Gerber has had relationships with some of its family farmers for more than four generations, and only partners with farmers who align with it on what the quality of the soil is, what types of seeds are planted, and how the company’s fruits and vegetables are grown and harvested. “We even agree on how we cook those products in our kitchens,” Partyka notes. “It’s an end-to-end control of the value chain and it’s in alignment with key strategic partners.”

In addition, Gerber works directly with some of the world’s largest retailers. In fact, the company works hard to ensure it has a win-win relationship with all of its retail partners, Partyka says.

Gerber has four United States-based factories, including two in Eau Claire, Wis., one in Fremont, Mich., and one in Fort Smith, Ark. Fremont also is the home of its engagement center, which facilitates the company’s ability to interact with parents via social media and other mediums.

Additionally, Gerber’s more than 1,000 employees play a critical role in its operations. Just like its key partnerships, the company has generational relationships with many of its employees. “The culture of this brand comes from its people,” Partyka says. “You’d be surprised how many multiple generations we actually have working in the Gerber business today. There is a loyalty to the Gerber brand.”

Gerber has capitalized on the years of success of these multigenerational relationships. “We continue to engage with past generations of employees and Gerber babies, as well as the many generations of retail customers and farmers to make sure we are not missing an important voice,” Partkya says.

Partyka, who joined Gerber 18 months ago, says, “When I think about what we’ve accomplished in 18 months, it’s amazing the amount of positive change we’ve been able to bring into the organization.”

He adds that he is most proud of Gerber’s 90-year dedication to “doing anything for baby.” “It’s part of our culture, and part of the way we operate our business,” Partyka concludes.

Gerber has provided high quality nutrition for generations and because of this the company feels it is a part of the fabric of the broader society. Gerber completely understands the important role they play in helping parents raise healthy babies. It takes this responsibility seriously and is committed to providing nutritious products for another 90 years.