Back to Profile Gallery > GoGo SqueeZ 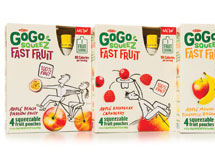 GoGo squeeZ says its goal is to become a household name, and because that status is usually won by products that have been around for decades, that means this five-year-old brand is in it for the long haul. GoGo squeeZ, a line of 100 percent natural squeezable applesauces, launched in the United States in 2008. That was a decade after its sister brand launched in France at the helm of parent company Materne, which has been around since the 1850s. The product is a hit in France, and Materne Managing Director of North America Meena Mansharamani says the U.S. market is even more prime for a product such as GoGo squeeZ.

“One of the biggest insights is that the U.S. has a really big applesauce market – it’s an established applesauce market,” Mansharamani explains. “We, however, have the touch point of being a more convenient applesauce. The squeezable aspect has more variety and play value that’s much more interesting.”

Like its name emphasizes, GoGo squeeZ is something that people can consume on the go, which is another factor in the brand’s current success. Food companies are seeing the population move from three meals a day to small meals all day.

“This is a very mobile country where people are on the move and look for snacking on the go,” Mansharamani says. “It’s much more a snacking culture than in France. But the U.S. also has a high need for healthy snacks given some of the issues we’ve seen around obesity. We are seeing people look for healthy options and we really want to offer that option here in the states.”

GoGo squeeZ currently has three lines. Its namesake GoGo squeeZ is a line of eight applesauces such as apple-apple, apple-peach and apple-mango. The organic GoGo squeeZ, which launched in Whole Foods last summer, comes in six varieties such as apple-cinnamon, apple-strawberry and apple-banana. The 3.2-ounce packages are 100 percent natural, and preservative and allergen free. Its 4.2-ounce adult focused packages, GoGo squeeZ Fast Fruit, offer a full serving of fruit and come in three combo flavors with multiple fruits packed into a single pouch, such as apple-mango-pineapple-banana. The line launched last November and is available at select retailers with an expansion planned for second-quarter 2013.

“Innovation is a really big part of our business,” Mansharamani emphasizes. “We certainly want to build our base with our core product, which is an important part of our growth, but we also want to give the consumer the variety they want through innovation. In the next six to eight weeks, you will see us add apple-grape, which has tested really well and will be available at retailers nationwide.”

Getting to Know You

The brand plans to launch other flavors this year that are still being finalized. To give consumers what they want, GoGo squeeZ has to know who its consumers are. Americans who want healthy snacks on the go are certainly part of its market, but a major focus is on families, too – especially the young kids who eat the product and the moms who purchase it.

“I was really excited to come here because GoGo squeeZ is all about working on products that are healthy and good for families and kids,” says Mansharamani, who joined the company in 2010. “It’s a passion point for me and when I joined the company we had two employees and have grown to 150 at the first quarter of this year.”

That growth has been fueled by a brand that knows its market well. GoGo squeeZ communicates with consumers though social media on its website and through Facebook, currently at 130,000 fans. It also leverages a network of bloggers who have a ground-level knowledge of what consumers are looking for and engages with a 150-member-strong mom panel passionate about the product. Its market research even goes deep into the consumers’ homes – through ethnographs, GoGo squeeZ can learn what challenges and needs its consumers see at home.

“Another way we learn is through sampling,” Mansharamani says. “We’ve sampled over a half-million people in places like Disney World’s Epcot Center. It’s another touchpoint that allows us to understand our customer, and we don’t just hand out samples. We engage with them about the product and get their input on our brand.”

When the brand launched in 2008, it imported 100 percent of its product from France; however, with the opening of its Traverse City, Mich., plant last year, the company hopes to get 90 percent of production from the United States.

“We want to have local capabilities and have product sourced locally and be better citizens of the U.S. market,” Mansharamani explains. “But we will always have a mix. There are benefits of having France capabilities and U.S. capabilities. There was a big frost in the Northeast including Michigan so a lot of the apple crops were compromised. Having backup in France allows us to source from both. Even if we reach 90 percent by the end of the year, I like going to sleep knowing we have resources from both places.”

GoGo squeeZ is committed to supporting environmentally responsible farms. The company scrutinizes is suppliers’ processes and seeks out those who use minimal pesticides, harvest non-GMO fruits that are wholly vegan, natural, gluten-free and kosher certified. Taste and freshness are of utmost importance and Mansharamani recalls even delaying a product launch because a supply was not up to par. She says the nitpickiness has paid off: On blind tests, GoGo squeeZ regularly bests other applesauce makers.

GoGo squeeZ’s next step in becoming a household name is to expand its reach. It’s available in 40,000 locations now, but because it’s good for home and on-the-go, the company is expanding into foodservice, fast-casual restaurants, bookstores and colleges.

“We have a very strong, passionate base of customers and we would like to expand that consumer base going forward,” Mansharamani says. “We want GoGo squeeZ to be something that’s very everyday and a staple in peoples’ snacking occasions.”