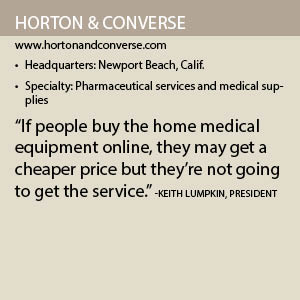 In addition to its full-service pharmacies, the company specializes in selling home medical supplies and equipment. Horton & Converse prides itself on having certified and trained specialists that are committed to going above and beyond in assisting patients with an extensive selection of products to fit their specific needs.

Though the company has been selling medical supplies since the 1980s, it is placing a heavy focus on expanding that portion of its business. “We are expanding our home medical supplies area,” Lumpkin says. “We’ve really expanded it in the past five years.”

Like many other pharmacies, Horton and Converse faces the problem of navigating the complexities of reimbursement.

Roughly 80 percent of Horton and Converse’s business comes from prescriptions, 10 percent from over-the-counter products and the rest from medical supplies. Out of its prescription-based income, only 10 percent of customers pay cash. The rest use their insurance.

“I think the biggest challenges for our industry is the insurance prescriptions,” Lumpkin says. “The biggest problem is reimbursement from pharmacy benefit managers and insurance companies.”

It’s not that insurers don’t reimburse the pharmacies. The problem is how much they reimburse them. Reduction in reimbursements continues to be a complex problem specifically with the inflation of generic drugs. When drug manufacturers raise the price for generics, pharmacy benefit managers are recurrently slow at updating the listings for the maximum allowable cost for the drugs. This often results in the pharmacies being reimbursed at less than the acquisition cost.

Buying products and services online has become a common form of shopping for many Americans. Online vendors are highly competitive not only with other online vendors, but also with brick-and-mortar competitors. While the Internet can be a great source for shoppers looking to save money, online shoppers cannot physically inspect the items being considered for purchase and they often do not have a person to talk to when dealing with a problem.

“If people buy the home medical equipment online, they may get a cheaper price but they’re not going to get the service,” Lumpkin says. “If something breaks and needs to be fixed, we stand behind the product. How are you going to get it fixed if you bought it online?”

Restocking and shipping costs are often charged on returns when buying online. In addition, medical equipment often has to be fitted to fit the customer properly – a difficult task when buying online, he adds.

“Home medical equipment is very hands-on,” Lumpkin says. “You really have to be knowledgeable about your product and your customer.”

Plus, items ordered online are sometimes back ordered and shoppers may not find out until weeks later. Also, there’s the slight chance that an online retailer may not be legitimate.

A Century in the Making

In 1917, two pharmacists working for the Sun Drug Company in Los Angeles decided to veer out on their own. With only $250 in capital, Charles S. Horton and Lawrence R. Converse opened their first prescription pharmacy on Dec. 6 in the Chapman Building at the corner of 8th and Broadway in downtown Los Angeles.

When choosing a logo, they decided upon using the famous Catholic image of St. George slaying a dragon. In their minds, it represented their pharmacy curing and slaying disease. To this day, the company uses that image on its logo.

As the years progressed and the country entered World War I, Horton enlisted in the U.S. Army and served for a year and a half. During his absence, Converse and his wife ran the business. After Horton returned, the duo opened their second store, also in Los Angeles, in July 1920.

Throughout the 1920’s and 1930’s Horton & Converse expanded, opening additional pharmacies in Los Angeles, San Bernardino, Beverly Hills and Pasadena. In 1940, the company had 12 locations and employed 111 people – 40 of whom were pharmacists. It also operated a laboratory that produced and compounded prescription products.

After the founders died, the company went through several ownerships. Eventually, it was forced into bankruptcy by its wholesaler and supplier, Los Angeles Drug Company. At that time, Gavin Herbert Pharmacies started manufacturing ophthalmic products for some of the physicians in the medical buildings in which Horton and Converse stores were located. This soon grew into Allergan Pharmaceuticals, which became a successful pharmaceutical manufacturing company.

During the 1960s, Gavin sold his pharmacies to the nursing home chain, Beverly Enterprises. In 1971, Beverly Enterprises had been suffering financially. It’s at that point that Gavin S. Herbert, Keith C. Lumpkin and several other pharmacists entered the picture. They purchased Herbert’s stores along with Horton & Converse Pharmacies and combined the two chains. They choose the Horton & Converse brand for its greater name recognition. Herbert died in the 1970s and the company is now owned entirely by the Lumpkin family. Keith R Lumpkin; his son, Charles R. Lumpkin; and daughter, Matilda A. Lumpkin, manage the company.