Back to Profile Gallery > La Moderna 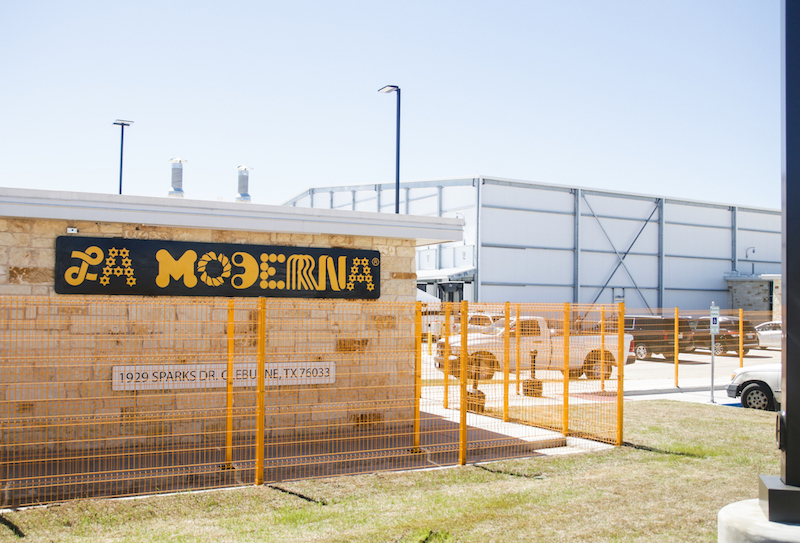 La Moderna sees much potential ahead with its new facility in Texas.

La Moderna may be in the business of producing pasta, but the company never loses sight of the fact that its employees are its most valuable assets. “You can feel that in how the owners and the general directors of the subsidiaries [operate],” Sales Director Esteban Abascal says.

“They are very serious about taking care of their employees,” he continues, noting that this has led to low worker turnover at La Moderna. “People feel very comfortable working here at the company.”

Based in Toluca, Mexico, La Moderna produces high quality Mexican pastas, cookies and flour mixes. Abascal explains that the firm started operations in 1920 as a milling company, but switched specialties when its owners saw an opportunity to make pasta. 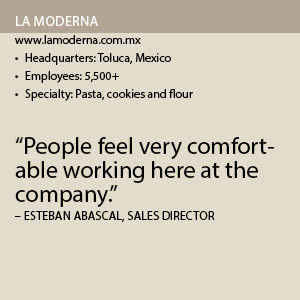 “Pasta wasn’t sold in Mexico at that time,” he continues, adding that La Moderna bought machinery from Italy and opened a small factory in Toluca that still operates to this day, with four product lines. “We’ve also been growing and creating new facilities around the country.”

One aspect that has made La Moderna so successful, he notes, is its vertically integrated structure. This gives it “the opportunity to be efficient on every single piece of the chain,” Abascal says.

La Moderna’s involvement begins at the harvesting of the wheat and stretches through to the factories that make the final products. “The company also has a transportation company that deals with distributing to the different work houses,” he says.

The firm also supplies its own plastic bags and carton boxes to its divisions. “That allows us to have better times and better costs,” he says.

La Moderna has established itself as Mexico’s largest pasta manufacturer, but the company has had its sights on expanding to the United States for 35 years. “We thought it was a natural market for ourselves, with the country being neighbors,” Abascal says.

La Moderna initially targeted chain stores marketed towards Hispanic consumers in California and Texas with its products and saw opportunities to branch out further. “We started to make some joint ventures and some agreements with different brands in the United States,” he recalls.

It also developed Allegra and Anatina, two brands targeted towards American consumers, and looked at ventures in the industrial market. But its largest step stateside has been the opening of its new, $50 million U.S. headquarters and production facility in Cleburne, Texas.

Spanning 150,000 square feet, “[It’s] the newest and most modern factory we’ve ever had,” he says, noting that La Moderna has invested in state-of-the-art technologies to provide a better product at the lowest cost possible, including ergonomic palletizing workstations, voice-directed systems, temperature-controlled storage and radio frequency scanning.

The facility also features equipment that allows La Moderna to make more products in less time with better color. “With all the new technology we have in the drying process, it allows the pasta to be more bright and have more consistency when cooking,” he says.

La Moderna also has the ability to better monitor safety in its processes and include more nutrition additives. “It can become a better product in all ways,” Abascal says.

Building the facility in Cleburne had its challenges for La Moderna, Abascal admits. Although the company had constructed pasta factories in Mexico, “Going to a foreign country was hard, because processes are different,” he says.

But the company won a warm, local reception. “The city of Cleburne was very friendly, offering us a lot of participation,” he recalls. “We found a lot of help from the authorities.”

Now that construction is complete, La Moderna still has to move forward with the task of penetrating the U.S. market. “The challenge is how are we going to get into the American cupboard,” he says, noting that the company wants to be carried in all U.S. supermarkets.

La Moderna also is developing strategies for competing against recognized U.S. brands, including focusing on the needs of consumers. For example, to meet the desire for healthier foods, “We’re trying to give consumers new options in how they eat their pasta,” he says.

One of the company’s goals for 2019 is to launch a new pasta line as well as new flavors. “There is also something called ‘functional pasta,’ where we can add sources of new minerals and stuff that is good for the body,” he adds.

Abascal joined La Moderna in 2009 and sees a strong future for the company in the United States. “There’s a lot of ways to grow in this market,” he says, noting that its strong team will help it expand.

“The factory has the ability to double its capacity,” he says, noting that it also will grow its reach. “It will not only serve the United States, but export products from here to other countries.”