Back to Profile Gallery > Living Harvest 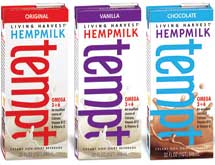 Developing great tasting hemp-based foods is only part of this company’s operations. Educating consumers and legislators is critical to its future. Penetrating the mainstream market is tough enough for natural food products, but it is even more difficult for a company like Living Harvest. Less than 10 years old, Living Harvest produces food made from hemp, a plant that has been unfairly maligned in the US for decades. Living Harvest’s long-term success depends not only on product development, it must also work to repair years of misinformation about a plant that some of our Founding Fathers grew in their own backyards.

“Hemp is often misunderstood by consumers,” said CEO Hans Fastre. “We’re involved in a lot of education with the general public and on the legislative side as well.”

A fairly small company, Living Harvest began in 2002 in Canada, migrating into the US several years later. The company is now based out of Portland, Ore. Initially, the company was focused on supplements but quickly realized the potential of promoting the positive aspects of hemp through the development of mainstream food products. About the three years ago, Living Harvest launched a hemp milk line. Marketed under the Tempt Hempmilk brand, it is a non-dairy beverage made from a proprietary recipe that transforms hemp seeds into hemp milk.

“We will continue to look at other products and be pioneers and innovators when it comes to developing hemp-based food products,” Fastre said. “Our products are sold in every state and across Canada, and we have some national accounts like Kroger and Whole Foods.”

“SunOpta has been excited about working with us on our products because it is something new and different for the company.

The company has warehouses in Northern California and the Minneapolis area, using a simple distribution model where most of its customers order through the warehouses, although larger accounts have product shipped direct from the manufacturer.

Two overarching challenges hover above everything Living Harvest does: a lack of understanding of hemp as a food source, and the fact that it remains illegal to grow hemp in the US. Both ends of that equation require Living Harvest to take an active role as an advocate for hemp-based foods.

When it comes to educating the public and retailers about the health benefits of hemp foods, Living Harvest works through partnerships with natural food trade organizations to help its products achieve deeper market penetration. Hemp milk is still the company’s number one product line, but since launching the ice cream line last year, Living Harvest is already noticing acceptance of the product in mainstream supermarkets. Fastre said the Pacific Northwest, Colorado, and East Coast are the main distribution areas now, but success is being seen in other parts of the country as well.

“Overall, we are seeing a pattern that is fairly typical for the natural foods market, but there are interesting pockets where we’re doing extremely well, like Texas, Florida, and other states in the south,” he said.

Changing the legal status of hemp as a cash crop in the US is a trickier situation. Industrial hemp was grouped with marijuana when the Controlled Substances Act was passed in 1970, outlawing its growth in the US. However, it contains only trace amounts of THC, which is the psycho-active component in marijuana. Never mind the fact that American luminaries like Thomas Jefferson were hemp farmers or that hemp is a valuable source of plant-based protein, omegas, amino acids, vitamins, and minerals.

It is perfectly legal to use hemp seeds to make food, and the hemp foods produced by Living Harvest are certified to contain 0.00% THC. However, the company has to source its hemp seeds from Canada because of the plants legal status here in the US. This creates logistical and cost difficulties for Living Harvest that can’t be overcome until the country changes its policy. The company is working to help make that change happen, but it won’t happen overnight.

“Several states have passed farming legislation in support of hemp, but the US is the only country that lumped hemp and marijuana together. That means the DEA is involved and needs to issue permits to farmers that want to grow industrial hemp,” Fastre said. “At this stage, they are not issuing any permits. But it is a great cash crop for farmers, and many in the US would like to grow industrial hemp.”

Going to Canada for raw ingredients is an expensive, non-value added step that increases Living Harvest’s costs and therefore the cost of the products. In fact, the company cannot even import hemp in its raw form. It must first be de-hulled and made non-viable. The company continues to maintain and cultivate relationships with farmers in Canada and works with entities like Vote Hemp to promote the legalization of industrial hemp in the US.

Living Harvest also engages consumers directly through its Facebook and Twitter accounts to keep people informed about products and get them involved with advocating for a change in the law. In addition, along with Dr. Bronner’s Magic Soaps, Manitoba Harvest, Nature’s Path, Nutiva, and Green Solutions Printing, Living Harvest was a major sponsor of Hemp History Week, a weeklong celebration of hemp’s US history designed to support American farmers who want the right to grow industrial hemp and urge the federal government to change its policy.

Fastre is confident that the government will eventually allow hemp to get back to its roots as an important industrial crop in America. He is equally confident that the American consumer’s increasing appetite for natural foods will help Living Harvest’s products earn a larger place on supermarket shelves across the country. For now, the company will continue to function as it always has, developing tasty, healthy food alternatives and advocating for a common sense approach to hemp regulation.

“Hemp has no drug value, and it is good for people’s health and for the environment as it doesn’t need as many pesticides or fertilizer, nor does it consume as much water as other cash crops,” he said. “We need to continue to drive our message down to the consumer level, and it should be up to the Department of Agriculture to regulate hemp. We feel that will lead to a major breakthrough for our company and reduce our costs so we can make our products more accessible.”