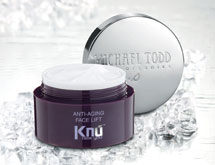 It is rare when a business results from the founder’s goal to improve his personal health. But for Chairman Lewis Hendler, that is exactly the story behind MICHAEL TODD true organics, a Port St. Lucie, Fla.-based manufacturer of organic and vegan skin care products.

Hendler, who started his career as an attorney, acquired MICHAEL TODD Cosmetics in December 2008. Previously, he was co-owner of scünci International, the hair accessory company formed in the early 1990s to market the well-known “scrunchy” ponytail holder that went on to become one of the world’s best known hair accessory brands. “We started [scünci] with zero market share and built it in 10 years to be the largest hair accessory company in the world,” he recalls. “[We were] passing companies like Goody Products and Conair.”

In 2005, Hendler and his partners sold the company to Conair, and he resumed work as a lawyer, representing select clients. However, he admits, “I was always looking for something else to do.”

“Coincidentally, I lead a fairly active lifestyle,” he continues, adding that he exercises regularly and eats well. This focus on a healthy lifestyle led to an increased interest in healthy more organic skin care products, too.

That’s when Hendler discovered that many of the products that claimed to be “natural” or “organic” actually used potentially harmful ingredients like parabens, sulfates and artificial fragrances and coloring. ”What you put on your skin matters,” according to Hendler, “because it is absorbed into the body’s tissues and bloodstream.”

Additionally, he found that many of these products were comprised mostly of water (the first listed ingredient). “For what you pay for these, I didn’t see why they couldn’t use a better ingredient than water,” he recalls.

It was then “I began to realize that there was an incredible opportunity to make a line of skin care products that used the highest-value ingredients that you could lay your hands on, such as healthy aloe vera juice as a base instead of water (cheap), alcohol (drying/irritating), mineral oil (suffocating to the skin) or apple juice (loaded with sugar) and without potentially harmful ingredients like parabens, sulfates, petro-chemicals and artificial dyes and fragrances,” he says. In addition, “I decided that I wanted to manufacture the line in the U.S., because ‘made in America’ still means something,” he adds.

With these goals in mind, Hendler purchased his current business, known then as Michael Todd Cosmetics. However,  “At that time, they were a cosmetics company [that] was 100 percent Internet-based,” Hendler recalls.

Hendler’s initial excitement about the cosmetics company began to ebb as he came to realize that its offerings while high quality were not much different from other premium brands. “[W]hen I sat down with buyers, people would say, ‘What’s new and different about your products?’ … and I didn’t have a good answer,” he recalls.

It was then that Hendler decided to stop producing cosmetics and refocus the direction of the company entirely on organically based skin care solutions that were targeted towards specific skin types and concerns. Additionally, the company name was changed to MICHAEL TODD true organics, reflecting this new direction.

Today, the company’s products have appeared in the green rooms of “The Ellen DeGeneres Show” and the pages of Allure, Elle, Family Circle and American Spa; and have received recommendations from a host of well-knowns, including Dr. Andrew Ordon, co-host of CBS’ “The Doctors,” reality show star Jillian Michaels; and actresses Lisa Rinna, Tori Spelling, Jennifer Beals, Melissa Gorga and Soleil Moon Frye of “Punky Brewster.”

“My company’s business model is not about spending $50 million a year promoting a product that doesn’t work as well as it could,” Hendler explains. “The mission of MICHAEL TODD true organics’ is making the most effective skin care money can buy using as much organic ingredients as possible and none of the bad stuff.

“The company’s slogan, ‘You’ll love what’s in it. You’ll love even more what’s not,’ says it all,” Hendler says. “People get our products, use them and then love them.”

Many competitors, he asserts, still use the formulations for skin products that date back to the 1950s idea of “better living through science.” If the product worked, then not much thought was given to the long-term effects of many of the ingredients – like parabens and sulfates – which are coming under greater scrutiny today.

In addition to potentially harmful ingredients, “Competitors will come out with natural or organic sounding products, but they aren’t nearly as committed to natural and organic as a company like ours,” Hendler asserts. “[We] didn’t go organic, we started that way.”

Although he is content to grow the company on the Internet, “I do aspire to be in mortar and bricks retail,” he says. However, getting retailers to carry the company’s products has been challenging.

“Everyone wants to see that you were successful with somebody [else’s store first],” he says. “When we talk with mortar-and-bricks retailers, most say, ‘We like your line, come back to us when you’re established in some other retailer.’ No one wants to be first anymore, they want to be safe.”

But these discussions have not managed to lower Hendler’s confidence in his own business. Instead, “There will come a point where we will reach critical mass: where we will be big enough, [have] been seen enough and heard enough by consumers that someone’s going to contact us and say, ‘We would like to bring in your line,’” Hendler predicts. “It’s going to happen organically.”

Hendler also aims to evolve the skin care industry with MICHAEL TODD true organics’ products. Recently, the company ran a promotion called “Label Sleuth” that encouraged consumers to read the ingredients of competing skin care products and comment on what they found.

“Many consumers,” Hendler notes, “wrote to say they had never read an ingredients list before and how surprised they were to learn how many of the products were mostly water, used artificial coloring and fragrance or contained potentially harmful ingredients like parabens.

“Creating that kind of awareness is very gratifying for me,” he says.

“We’re in the early innings of the organics story,” Hendler says. “It’s a lifestyle story. People increasingly care more and more about the effect the foods they eat and the products they use have on their overall health and on the environment.

Hendler predicts strong growth and a bright future for MICHAEL TODD true organics, thanks to an increase in health-conscious consumers. “That’s where the growth is going to come from,” he predicts.