Back to Profile Gallery > Mountain/Service Distributors 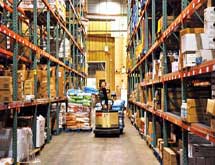 The company currently employs 80 people, has an 80,000-square-foot warehouse in South Fallsburg, NY, has another small facility in Long Island, and distributes products in most of New York, including New York City and Long Island; a piece of Pennsylvania; and western parts of Vermont, Massachusetts, and Connecticut.

Steve Altman, president, is the son of the founder and has been running the business full time since he was 22. The company has seen significant growth every year, although recent years have slowed somewhat because of the expansion of tobacco regulations. Despite that regulatory environment’s impact on business, Mountain/Service Distributors is still a highly profitable supplier.

“We’ve been very involved with our state and national associations over the years, and my son is now involved the business and sits on the board of our national association,” said Altman. “I mention that because there are many companies that sell products, but we believe in networking and building relationships.”

In fact, Altman said building those relationships is the most effective way to distance one convenience store distributor from another. Ten years ago, Mountain/Service Distributors joined a group called WAM (Wholesale and Manufacturers), a group of 24 distributors from around the country. WAM aims to tighten the bonds and link the sales cycle between manufacturers, distributors, retailers, and consumers.

Indeed, relationships are a central aspect of Mountain/Service’s long-term strategy. Altman said his retail customers know the company doesn’t come in simply to take orders and checks. The sales reps, known as territory managers at Mountain/Service,  engage retailers in the order entry process, which is done mostly through Telxon order entry systems, and then help them with things like merchandising, planogramming, and maximizing profit margins.

“They get to know that we are there for them to help them grow, because if they don’t grow, we don’t grow,” said Altman.

On the manufacturing side, the company works closely with manufacturers linked into the WAM group. Nestle and Mars, for example, are both involved with the group, and Mountain/Service aggressively promotes their products.

“We put our energy toward the manufacturers who have put their energy into us,” Altman said. “Those WAM manufacturers have done that, backing their words up with action. We learn from each other and share information with one another, and it is a beneficial relationship for all parties.”

Always on the move

Dating all the way back to the earliest days of the company, when it branched away from ice sales and into other categories after the advent of refrigeration, Mountain/Service has a history of continuous of improvement. Recent investments include incorporating the PickRite order picking system into its warehouse, a move that reduced errors by almost 90%.

In addition, the company started using a smart version of a handheld Telxon for order entry that has e-mail capability and contains customer price books. It also provides territory managers with data on customers such as order history and volumes, allowing them to share that information with retailers.

Another critical aspect of continuous improvement for Mountain/Service Distributors is staying abreast of changes to the merchandise mix. The decline in tobacco has been a big change for the company, which responded by putting a great deal of emphasis on expansion in foodservice.

“We have all kinds of pizza, hot dogs, fresh and frozen sandwiches, and microwave food programs for convenience stores. Building that is a big part of our strategy today,” said Altman. “We can’t replace the tobacco-dollar volume, because tobacco is low margin, high volume, but foodservice is low volume, high margin. Growing those foodservice programs helps us offset that decline in tobacco.”

Finding ways to grow and adapt are the immediate concerns for Mountain/Service Distributors. For instance, although the vast majority of the company’s customers are convenience stores, Mountain/Service has diversified somewhat in the last few years, serving non-traditional customers like hospital gift shops and drugstores and running a coffee-service business. The concept is to find places the company can put its capabilities to work where tobacco isn’t part of the equation to begin with.

In addition, during Altman’s time at the helm, the company has acquired seven distribution companies. Although nothing is currently planned in that area, Altman knows what must be done to continue the company well into the future.

“There are only three ways to grow. You can sell customers more products, but that is difficult. You can gain new customers and take marketshare away from competitors. Or you can buy out another distributor and hope to retain 70% of their business,” he said. “We will look for growth opportunities in all those areas, but the key to our longevity is our focus on relationships with manufacturers and retailers, and that will continue to be our focus.”