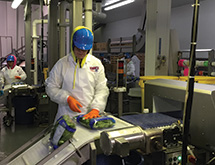 With consumers’ tastes shifting to healthier foods and more produce, California’s Central Coast has had its share of changes in keeping up with dietary trends. Who a few years ago would have predicted Americans’ growing interest in kale and brussels sprouts? But the dozen growers who supply Muzzi Family Farms with its raw product for its fresh and frozen processing operations have been adjusting their product mixes to keep up with shifting demand.

Muzzi Family Farms is one of the few companies in the Central Coast that processes both fresh and frozen vegetables, mainly for the foodservice industry. It is the sales entity for the fresh produce that is processed by its sister company, Watsonville Produce, and the frozen produce of another sister company, Blue Ribbon Frozen Foods.

Managing Partner Dominic Muzzi says that 10 percent of the company’s product goes to retail. Approximately two-thirds of the volume is sold as fresh produce and one-third is frozen. Most of the frozen produce is used by companies as ingredients in finished foods. Spinach the company processes may end up in lasagna, quiche or spinach dip, and its brussels sprouts in a pot pie.

Some of the growers for Muzzi Family Farms specialize in produce for fresh use and others for frozen, although some grow produce for both. Vegetables usually are designated for fresh or frozen use when they are seeded, although their use may shift based on market conditions at harvest time. “There is some flexibility as you get to harvest depending on the weather, markets, availability and demand,” Muzzi declares. “A number of variables may dictate if a product is going to go fresh or frozen.”

Among those variables are the frequency of rain – the Central Coast is experiencing unprecedented drought this year – and the prevalence of insects and mildew. Those same variables around the world can affect Muzzi’s market. “Not only does the weather matter in our growing areas, but in other areas as well, because they may have other growing issues in those areas,” he points out.

“If other areas are in good production, sometimes that market may be depressed, and if other areas are having weather issues of their own, sometimes the market can be favorable [for us],” Muzzi continues. “Competing with other areas nationally or internationally, you never wish bad on somebody else. But when that does happen, oftentimes it really changes things. If you’re in the right spot at the right time, it can be favorable financially, or the opposite – if you’re in the wrong area, it can be unfavorable.”

Muzzi’s produce is distributed mostly in the United States and Canada. The company takes advantage of the growing seasons – the Central Coast gets rain in the winter – so Muzzi moves southeast to Yuma, Ariz., in mid-November. Most of the same growers that Muzzi works with also grow near his company in Arizona, and approximately 20 percent of his workforce moves with the company. Then, in early April, they move back to the Central Coast.

“Mother Nature can always surprise us, but for the most part, we know when we want to move down and back,” Muzzi maintains. The company’s plant in Arizona is approximately 60,000 square feet, and the one in Watsonville is 40,000 square feet. Use of solar energy is being considered at the Watsonville facility.

The plants operate on two production shifts, and then they are sanitized by a third-party company that specializes in food safety. “Somebody is always in the plant – we’re either in production or sanitizing,” Muzzi says. “Food safety is huge for us; we invest significant financial resources in it. We’re constantly trying to be better. We make sure our facilities are as upgraded as possible, and our personnel receive ongoing training and testing.” The facilities also receive environmental testing and are monitored daily by Muzzi employees along with the third-party company.

Muzzi attributes the company’s success to “honesty, hard work and working with good employees that also have a good work ethic, treating our employees fairly and taking care of them as good as we can, and having a good reputation in the fresh and frozen industries for putting up food-safe, quality product.”

With “family” in the company name, Muzzi emphasizes that aspect of the business. “My family has been in the produce industry for 50 years, and we love the industry and the people,” Muzzi says. “It’s a challenge – you’re dealing with Mother Nature, market conditions and different issues, but it is exciting. It’s never boring, so my family enjoys it.”