Back to Profile Gallery > Nawgan 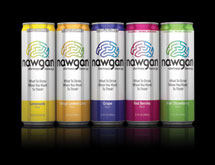 When Rob Paul, founder, CEO and chief science officer of Nawgan, created a functional beverage to improve brain performance, it was the science that came easy. Paul, after all, does have a science background. His standing as a university professor with a Ph.D. in biopsychology and a specialty in neuropsychology matched perfectly with his vision to create a functional brain improvement beverage. It was all of the other stuff, however – business operations, marketing and even flavor – that posed the greater challenges.

Paul was settled on the science – an anchor combination of Cognizin, also known as citocoline, and caffeine met all of his thresholds for the functionality of the beverage. The Cognizin contains choline – which is available in many foods, such as potatoes, and cauliflower – as well as cytidine. In his research, Paul found that people who consume 250mg of Cognizin daily experience improved performance on a test of attention. So he made sure that every can of Nawgan would contain 250mg of Cognizin, as well.

Paul’s research also found that caffeine delivers both short- and long-term benefits. In the short term it immediately improves alertness and over the long term, reasonable amounts of caffeine help to offset changes in the brain that occur naturally through aging or injury.

“When I started Nawgan, I did R&D for two years and in 2009, I introduced the product to the market,” Paul says. “I introduced it to one store and initially I just wanted to understand how the consumer responded to the product, what they liked about it and what they wanted to change. I needed to learn in terms of a business perspective how to continue to develop a new product.”

What Paul found during that year doing Saturday store demos at a local grocery store exposed both the beverage’s strengths and weaknesses. The functional aspects of Nawgan resonated with consumers. The taste, however, not so much. So, he spent that year improving the beverage’s taste and settled on six flavors – red berries, mandarin orange, strawberry kiwi, lemonade, grape and mango lemon lime – all made with natural sweeteners, only 45 calories and NSF-certified for sport and ideal for collegiate and professional athletes.

With the confidence that he now had a great-tasting and great-performing product, Paul pushed the product from one St. Louis store to 12 stores in the area, and the products’ retooling paid off in industry recognition. At the 7th InnoBev Global Beverages Summit, Nawgan was awarded Best Overall Concept and Best Alertness Drink.

With those two wins in its portfolio, Nawgan began an aggressive yet modest expansion into markets outside of St. Louis, working with both local and national retailers.

“From a national perspective, we are in Vitamin Shoppe, so that gives us a large geographic footprint and we do very well in Vitamin Shoppe,” Paul says. “The consumers that go there are great label readers and smart consumers, so Nawgan is a natural fit for that group because they understand the benefit of our ingredients. We also have a strong focus on St. Louis because that’s where we started. We also have presence through The Fresh Market and then we have some regional presence in some drugstore and grocery store accounts.”

Going into 2014, Paul says the company’s focus will be aimed at the St. Louis market and growing with more national accounts, such as the one it holds with Vitamin Shoppe. Markets that are home to university and college towns will also command greater attention going into this new year.

“In regions that provide contact with university and college students, Nawgan does remarkably well,” Paul says. “The product connects naturally with them, so we want to get connected with young professionals and university students.”

The company plans to do that with a heightened use of social media. Through its Facebook, Twitter, YouTube and Flickr accounts, Nawgan plans to up its networking strategy by playing up the benefits unique to Nawgan and differentiating itself as a functional beverage rather than an energy drink.

“Because we sell in a 12-ounce can, there is some confusion about what Nawgan does for you in comparison with your standard energy drink,” Paul says. “The onus is on us to make clear that we are not an energy drink. Going into 2014, our focus will be making more explicit marketing campaigns that define with point-of-sale materials and social media exactly what our product is and how it relates to brain function. It’ll be much more brain-focused and that will be done to help our consumers better understand the product.”

Nawgan has certainly come a long way since its first one-store account back in 2009, but Paul says there is even more ground for Nawgan to tread in this market. The functional beverage market is one that continues to evolve and Paul believes that Nawgan has the exact qualities that performance-conscious consumers are looking for – a low-calorie, flavorful and functional beverage.

“The biggest evolution in the beverage market is that the market position has to be supported by a strong science position,” Paul explains. “So beverages that have a strong science foundation in addition to good branding and marketing, those are the products that will gain marketshare in the overall field, and I think Nawgan is at the forefront of that trend.”