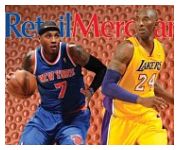 Feb. 6, 2013 – The National Basketball Association (NBA), Sean John, and Macy’s today announced a new multiyear agreement that features a presenting partnership of the Entertainment Series at NBA All-Star and includes upcoming NBA-themed events at Macy’s nationwide that will highlight signature styles from Sean John. The “Entertainment Series presented by Sean John at Macy’s” will showcase musical performances during State Farm All-Star Saturday Night and during pregame introductions and halftime at the 2013 NBA All-Star Game.

“With this partnership, Sean John and the NBA are fusing the worlds of style and sports to create fashiontainment,” said Jeff Tweedy, President of Sean John. “Together with Macy’s, our exclusive retail partner, we’re excited to launch a series of events and activities that will allow us to showcase the Sean John brand.”

“Sean John has been a long-time partner of Macy’s, and we’re thrilled to combine efforts in support of the NBA, one of America’s greatest sports organizations,” said Fred Marione, Macy’s vice president, men’s merchandise marketing. “This dynamic program includes engaging live events at Macy’s stores, allowing us a new opportunity to share the fashion and entertainment expertise of our brands with basketball fans nationwide.”

“Sean John and Macy’s are leading lifestyle brands and are a great fit to present the Entertainment Series at NBA All-Star,” said Rachel Jacobson, NBA Senior Vice President of Global Marketing Partnerships. “We’re looking forward to tipping off our partnership with some great performances at NBA All-Star 2013, and will continue to bring our fans everything that Sean John and Macy’s has to offer through a variety of NBA-themed events at stores across the country.”

At NBA All-Star, the “Entertainment Series presented by Sean John at Macy’s” will be broadcast live as part of State Farm All-Star Saturday Night and the 2013 NBA All-Star Game. National coverage will begin at 8 p.m. EST from the Toyota Center on Saturday, Feb. 16 and 8 p.m. EST on Sunday, Feb. 17, and will air live on TNT, ESPN Radio and in more than 200 countries and will be broadcast in more than 40 languages.