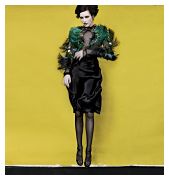 Aug. 6, 2013 – Neiman Marcus announces Sarah Moon as the photographer of The Art of Fashion campaign for Fall 2013. The campaign includes twenty-three  images of Fall fashions and will appear in the September edition of the Neiman Marcus publication, the book.

Sarah Moon was born in England in 1940, started modeling at 19 and in 1968 began her fashion and commercial photography career. Moon’s style of photography is soft focused, moody and painterly. “The success of an image is really a sum of details,” says Moon. “You shoot, you shoot, you shoot, but until you see it you don’t know.” Whether in her preferred black and white, or in color, her photos—through their grain, depth, texture, and blurriness—go beyond capturing an image to convey emotion and a nostalgia that’s often described as haunting in its power.