Back to Profile Gallery > New Wizards vs Aliens App Offers the First Synchronized Second Screen Experience for a Kids’ TV Show in the U.S. 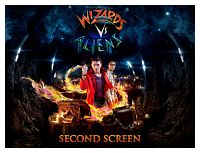 May 30, 2013 – FremantleMedia Kids & Family Entertainment and Magic Ruby, the leading provider of technology and apps for the second screen, today announced the upcoming launch of Wizards vs Aliens on Hub Network will be supported by a first-of-its-kind second screen app available exclusively on iPad. Marking the first dedicated second screen experience for a kids’ TV show in the U.S., the Wizards vs Aliens app is available now on the App Store, two days prior to the show premiere on Hub Network on June 1, 2013.

The app offers a comprehensive and robust Wizards vs Aliens experience, providing content above and beyond what can be experienced in the broadcast TV universe.  Consumers will have an opportunity to sync the app with actual episodes of the show, providing immersive content to enhance their viewing experience.  As viewers progress through the series and continue using the sync feature, they will unlock additional content relevant to each episode and the progression of the storyline.

Fans of the show will also become further engaged in the storyline with interactive polls, alien-inspired quizzes and collectible character sets.  In addition, exclusive on-set and character photos will draw fans into the creative process behind the making of the show.

As fans continue to engage with and explore the app, they can unlock special rewards for their efforts. Should they want to encourage others to recognize their show knowledge and fan status, a special “Wish List” can be e-mailed to parents that will allow them to highlight all the great Wizards vs Aliens products they hope to receive such as T-shirts, hats, puzzles, and more.

The Wizards vs Aliens app, created by Magic Ruby, also offers a unique educational experience, engaging kids in factual science-based content. Kids have an opportunity to further explore the science inspired geology and geography featured in the spellbinding adventures from the Wizards vs Aliens TV show.

“FremantleMedia has been a pioneer in the second screen experience for some of the biggest entertainment shows in the world, such as American Idol and The X Factor, in turn making them two of the most socially relevant shows,” said Nicholas Dale, Senior Manager of Interactive and Mobile, FremantleMedia.  “With today’s youth utilizing mobile technology at an increasing rate, we’re thrilled to now be the leader in bringing a second screen experience to the kids’ market.”

“We’re excited to partner with FremantleMedia on the second screen companion app for Wizards vs Aliens,” said Tom Engdahl, President and CEO of Magic Ruby. “FremantleMedia is a global leader in creating compelling content for kids and families; we believe this first-of-its-kind app is the perfect vehicle to immerse fans more deeply into the Wizards vs Aliens universe.”

The Wizards vs Aliens app is available for free from the App Store on iPad or at www.AppStore.com/WizardsvsAliens.