Back to Profile Gallery > Nittany MinitMart

As a result, Nittany MinitMart has launched new programs and contests to motivate its workforce, get it involved with the company and offer rewards for exemplary work.

“Employee retention is one of the biggest challenges in this industry,” says Nicole Masullo, division manager. “So, we have created programs to give back to our associates. Our goal is to get them engaged in the business and excited about their job.”

Nittany MinitMart convenience stores are owned by Nittany Energy, a family-owned fuel and energy company that has been operating out of central and northern Pennsylvania for more than 50 years. 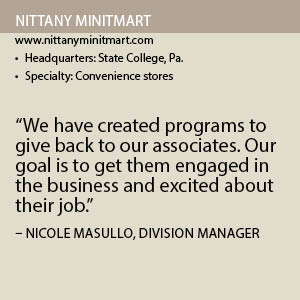 Aside from its new employee retention incentives, Nittany MinitMart is in the midst of a three-year capital improvement project that involves remodeling its convenience stores to give them a fresh look.

In addition, the company plans to launch a new mobile app next year and is growing its food service program with new menu offerings. Unlike most fuel stations, Nittany MinitMart convenience stores offer a full line of hot and cold foods. “We don’t have the cookie cutter offering that some of our competitors have,” Masullo says. “We have great variety and aggressive price points. That makes us stand out.”

Nittany MinitMart believes in rewarding loyalty. Although the company has had a customer loyalty program in place for many years, it launched a new and improved version this year – and the program is for both customers and company employees.

Among the perks, customers receive points and 3 cents to 5 cents per gallon discounts on gas along with free items once a month. For example, once a month, they can redeem a free select item like a candy bar or a beverage. On their birthday month, they will receive a free pie. They also receive 10 points for every dollar spent (double on select items) that can be redeemed for merchandise. In addition, they can enter raffles.

For employees, the new loyalty program consists of a variety of different contests and recognition programs designed to increase morale, sales and improve company culture.

“It’s our recognition program,” Masullo says. “We’re really driving that. Employees may be rewarded with free products and we hope to get them excited about contests.”

In May, the company ran a taco promotion that awarded employees of the store that sold the most amount of tacos with free tacos. “Also, we currently have a contest for store managers to drive their associates to scan customer loyalty members and sing up new ones,” Masullo says. “We’re giving away three prize packages to the store manager whose store does the best. The packages contain a paid day off, concert tickets, football tickets and more.”

Nittany MinitMarts has also launched a variety of sales contests to drive home sales and get its associates involved. One of them is a Secret Sale contest. Each two months, the company chooses one item, like a candy bar, that is assigned an “attractive price point.” For every item that a store associates sell, they receive an entry form to win a six-month supply of candy bars.

“We’ve run this contest for about two months and I have received about 17,000 entry forms so far,” Masullo adds. “We have really driven the market with this. It really gets the associates excited about winning something tangible. These are some of the positive things we’re trying to set ourselves apart from our competition.”

Since Nittany MinitMarts place a high focus on its food program, the company launched a New For Speed program in June. Its goal is to encourage its food service employees to make food faster to offer their customers a shorter wait time.

Employees can ask a supervisor to time them while they are preparing certain foods. “It’s a continuous program that goes for a year,” Masullo says. “Every store will have two winners and those two winners will compete for a district title. There will be one winner for each district and then the finale.”

To further reward employees, Nittany MinitMart managers can give out a type of “business card” to employees that they see going “above and beyond.” With that card, the employee can then enter the Take a Minute contest, an ongoing program that gives them a chance to win a variety of prizes like theme park tickets and gift cards.

Gas stations and convenience stores have not historically inspired confidence as palate pleasers. Doughnuts or hot dogs rolling on a spinner grill come to mind. But that’s another distinguishing feature of Nittany MinitMart convenience stores.

The company’s food service program offers items ranging from hot subs to juicy burgers. Its menu is peppered with

“We introduced our pizza program about two years ago and it’s doing exceptionally well,” Masullo says. “We typically have typically three to four promos per month. But we always lead with a pizza promotion.” The company recently added Stromboli pizza to its menu and a number of salads, macaroni baked beans and cold foods.

Nittany MinitMart convenience stores are owned by Nittany Oil, one of the largest heating oil and gasoline distributorships in central Pennsylvania. The company was founded in 1980s by Jim and Sharon Martin.