Back to Profile Gallery > NYCWFF/SOBEWFF 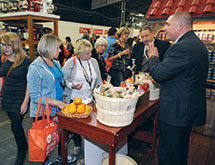 The South Beach and New York City Wine and Food Festivals are four-day, star-studded gatherings that showcase the talents of the world’s most renowned wine and spirits producers, chefs and culinary personalities, while raising money for education and to help fight hunger. “The goal was to create a world-class event and food festival that helped raise funds in Florida for education and in New York City for the hunger causes,” says Lee Brian Schrager, founder and vice president of corporate communications and national events at Southern Wine and Spirits of America. “People have a great time, they get educated and meet great chefs and winemakers, but the bottom line that is most important is raising funds.”

To date, the festivals have raised more than $20 million for the Florida International University Chaplin School of Hospitality and Tourism Management, as well as $8.5 million for the Food Bank for New York City and the Share Our Strength’s No Kid Hungry campaign. “I think what makes us unique is not only that South Beach and New York City Wine and Food Festivals are the two largest wine and food festivals, but that they are both not-for-profit,” Schrager says.

Both consumers and food industry executives attend the festivals, but Schrager emphasizes that it is definitely consumer-driven. Consumers come from all over the United States, and tickets are sold in 24 different countries worldwide. More than 50,000 people attend each festival.

The Food Network New York City Wine and Food Festival presented by Food & Wine, which took place Oct. 16 to 19, attracted about 55,000 people and raised more than $1 million to benefit the Food Bank for New York City and Share Our Strength’s No Kid Hungry campaign.

The 14th annual Food Network and Cooking Channel South Beach Wine and Food Festival presented by Food & Wine will take place Feb. 19 to 22, 2015, and offer more than 75 events, including new parties and talent along with updates to the festival’s most signature tastings.

South Beach Wine and Food Festival’s treasured celebration of all things grilled, braised and barbecued – Meatopia: The Q Revolution – will be held Feb. 21 and hosted by Guy Fieri, restaurateur, author and television personality for the Food Network. Meatopia will be held in the sand behind South Beach’s iconic Delano Hotel.

The Whole Foods Market Grand Tasting Village will also be getting upgrades this year, such as additional seating and shaded areas, live music and DJs, select park-and-ride offerings and the introduction of chef culinary captains who will represent cohorts of chefs from various neighborhoods throughout South Florida.

Although the festival is bringing back refreshed versions of its favorite events this year, attendees can also look forward to new events. New this year to the South Beach Wine and Food Festival:

•A rooftop ice cream and chocolate party with Candace Nelson of the Beverly Hills-based Sprinkles Cupcakes;

•A tribute to the resurgence of tiki culture mixology during a late-night, poolside bartender competition hosted by Emeril Lagasse;

The South Beach Wine and Food Festival proceeds benefit the students of the Florida International University Chaplin School of Hospitality and Tourism Management. The students assist festival organizers with a number of duties, including sponsorship fulfillment, restaurant and exhibitor recruitment, and logistics and inventory, as well as have the opportunity to work alongside the world’s greatest celebrity chefs and winemakers.