Back to Profile Gallery > Once Again Nut Butter 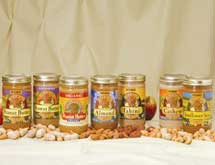 This 34-year-old organization has served the natural products industry for nearly four decades and has achieved continued success. Once Again Nut Butter was established in 1976 as a worker cooperative. Jeremy Thaler and Constance Potter, the organization’s founders, set out with a primary goal of providing retailers in the natural products industry with a tasty yet healthy and nutritious peanut butter. Nearly four decades later, the company’s focus remains the same. Throughout the years, it has established a strong reputation as a top manufacturer, providing its customers with high-quality products and consistent, friendly service.

Operating out of Nunda, NY, Once Again Nut Butter currently employs a staff of just 25 individuals. Although its team has remained small over the years, its product offering has expanded quite a bit. Some of the company’s newest additions include organic Omega-3 almond butter and organic flax seed oil; it also offers a full line of natural honeys, nuts, and Tahini, as well as peanut, almond, cashew, and sunflower butters.

And according to Gael Orr, sales coordinator, Once Again Nut Butter has developed the first organic peanut butter that does not have any oil separation. “We constantly strive to provide our customers with innovative products that meet their demands,” she said, adding that part of this customer-centric focus involves making products available in a variety of sizes. “Our butters are available in 16 oz. jars as well as large bulk drums, and we offer peanuts, cashews, and almonds in everything from bulk-sized cases to 12 oz. re-sealable bags.”

Because its staff consists of only 25 employees, it’s easy to understand how Once Again Nut Butter maintains a close-knit corporate culture. One thing that’s unique, however, is that the company is actually an employee-owned entity. According to Robert Gelser, the company’s general manager, this is made possible through an ESOP.

The company first became an ESOP in 1996, when it was roughly 49% employee-owned. Fourteen years later, the organization is 100% employee-owned. “We are an ESOP, but we govern ourselves as a worker-owned cooperative,” Gelser said, noting that the biggest difference between a worker co-op and an ESOP is in the valuation of company stock. “All of the employees here are part owners, and as a whole, the organization is democratically managed; everyone on staff gets to voice their opinion about how the company is managed.”

Gelser explained that this is made possible as a result of one important factor: all employees are invited to and encouraged to attend every company meeting that takes place. Everything, from company-wide policies to operational issues to financial strategies, is discussed at these meetings, and everyone’s voice is heard, he said. The result of this democratic leadership style is two-fold: employees are satisfied, and subsequently, customers are satisfied.

“If an issue arises, a subcommittee will be formed to help resolve whatever the problem is, and the solution that’s developed is then subject to a final company-wide vote where every employee gets a single vote. Everyone’s vote is worth the same amount of weight,” Gelser said, adding that some of the company’s employees also sit on the board of directors.

Furthermore, Once Again Nut Butter has put a compensation ratio into place, ensuring all staff members are rewarded fairly. The income ratio, which is currently set at 3.5 to 1, ensures that the highest-paid employee never makes more than three and a half times what the lowest-paid employee is earning. Additionally, profit-sharing bonuses are distributed equally to all staff members.

Looking to the months ahead

Looking to the future, Gelser and Orr said the team at Once Again Nut Butter plans to continue on as it has been, but it also plans to take advantage of more recent opportunities. In the last few months, the team has made a conscious decision to branch out into several other markets—namely into the ingredients and private-label sectors.

“We still work hard to keep our branded image strong in the industry, but there were some growth opportunities in other areas that presented themselves, so we wanted to take advantage of them,” Gelser said, noting that in the private-label arena, the company can sell its jarred products to companies involved in the mass-market approach.

The diversification, he explained, has helped the company remain successful in recent months, during a time when many organizations in the retail industry are fighting to sustain operations.

“The economy has had an impact on all areas of operation, but the fact that we have three consumer bases has definitely been beneficial. We have always distributed throughout the entire US, but recently we’ve also looked at targeting some of the different areas where our presence hasn’t been as strong,” Gelser said. “Right now, we’re looking at various warehousing opportunities, adjusting our marketing approach, and looking for different ways to get our products distributed more efficiently.”