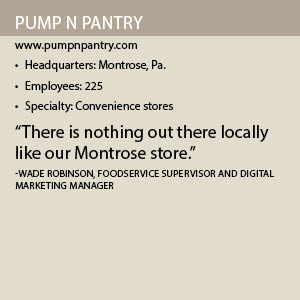 J. Thomas Quigg founded the Montrose, Pa.-based company in 1975, delivering fuel to homes in the area. His son, Scott Quigg, is the owner and president of today’s regional company serving high-quality food and beverages to rural communities.

“We don’t have a cookie-cutter footprint like the big guys have and our buildings vary widely,” Robinson explains. “The common theme is that when you first walk in you see our foodservice and coffee front and center. That’s the thing that binds all the stores together.”

Robinson says foodservice has always been his passion and he maintained that focus when he joined Pump N Pantry less than two years out of college. After managing Pump N Pantry stores for 12 years, Robinson is now in his sixth year as the foodservice supervisor. “When I was hired on, I told the vice president of the company that I wanted to focus on the food and he said that’s exactly what we are looking at,” he remembers. “It’s a unique perspective as some companies are just dabbling in foodservice.”

Pump N Pantry’s lunch crowd is typically the 20- to 40-year-old male blue-collar worker, Robinson says. “There is a boom in the area on natural gas, so we do have a lot of truck drivers in for our lunch crowd,” he adds. “In the evening, our customer base shifts to teachers and students once school lets out and then parents looking for a quick meal before taking their kids to sports practice or activities.”

The company prides itself on developing relationships in its communities, especially in towns further away from its Montrose store. “We encourage our managers and employees to get involved in the community,” Robinson says. “Maybe we can provide pizza at a concession stand or donate a case of water to the soccer team to help them out. We want to be there so they know who we are, and because it’s our community, too.”

Pump N Pantry’s customer contact is face-to-face, but customers do also contact the company through its website, app and Facebook. “We respond immediately,” Robinson says. “It doesn’t matter what time of day or night it is and that surprises people. If we get a complaint at 1 a.m. on Saturday we have responded by 1:05 a.m. That gives us the opportunity to let them know we on the corporate side are here 24/7.”

Pump N Pantry continuously works on improving its menu options. “I have developed fantastic relationships with brokers who feed us lunch for our monthly manager training meetings,” Robinson says. “They have the opportunity to show us new products and I can ask 30 people in the room what they thought.”

The lunches allow Pump N Pantry associates to select their favorite items, which may then be introduced to a couple test locations. Once proven successful, the item will be rolled out to all Pump N Pantry stores. “One example is our cheesy bread sticks,” Robinson says. “We couldn’t figure out an easy way to make them quickly, but one of our partners provided us with dough we can make in six to eight minutes and can now make them in the same amount of time as our pizzas.”

Pump N Pantry test products for popularity about four times per year, but holds on to its classic menu items. Tornados are rolled oven-baked flour tortillas around a variety of fillings that came out about a decade ago when Robinson was a store manager. “It’s one item that has stuck and will be successful for a while,” he adds.

Endless Mountains Beanery Coffee is Pump N Pantry’s biggest beverage seller. The company has been testing iced coffee in two of its stores and because of its success it plans to expand it to all locations. In August, Pump N Pantry will feature cold brew coffee in its Montrose store. “There seems to be a lot of demand for cold brew and it’s a simple process to pull off,” Robinson notes.

Pennsylvania recently updated its alcohol laws, allowing Pump N Pantry to begin selling beer and wine in some of its stores in the near future. “In Pennsylvania, you couldn’t sell beer, wine or any alcohol where gas was sold,” Robinson explains. “You could really only buy it in a bar or from a distributor, but those laws have been relaxed.”

In October 2015, Pump N Pantry opened its new Montrose store, which was located next to its original location. “It’s our newest store at the site of our oldest store,” Robinson describes. “Now Montrose is our centerpiece. It’s the castle of convenience stores.”

The Montrose location was built from the ground up, modernized and now features a drive-thru, which Robinson says is taking some getting used to for its patrons. “You can get everything through the drive-thru,” he adds. “You can order a sub, get a slice of pizza, a burger, a loaf of bread and cigarettes. We have been getting the word out for two years now and we’ve had some progress, but some people still don’t use it.”

Montrose is big, beautiful, exciting and different, Robinson says. Some design elements from the store will be used in future remodels, including the drive-thru. “There is nothing out there locally like our Montrose store,” he continues. “It has a wow factor.”

In addition to its Montrose location, Pump N Pantry has also been working with Binghamton, N.Y.-based FreshySites to upgrade its website and mobile app. “FreshySites is building our website from the ground up and optimizing it so it looks great on any mobile device,” Robinson says. “We will implement mobile ordering through the website and are in early stages of that. I’d like to say we will have that within the year.”

Every Pump N Pantry is upgrading to digital menu boards, which Robinson says have brightened up the stores and are much more attractive. The company also added touchscreen kiosks in seven of its locations and hopes to add more in the future.

“That really helps with add-on sales because it’s hard to get people to suggestive sell when there is a long line of people waiting to order,” Robinson says. “If a machine asks you if you want double the meat or cheese, that’s easy to push a button to say ‘yes!’ The touchscreen ordering kiosks have been a big, big benefit to us.”

Moving forward, Pump N Pantry plans to continue to deliver good, fresh food made from high-quality ingredients to grow its reputation as the go-to convenience store in northeastern Pennsylvania.