Back to Profile Gallery > Richard’s Foodporium 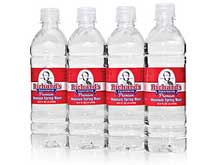 Within two years of acquiring Richard’s Whole Foods chain in the late ’90s, John Rorer and his two partners doubled the company’s sales. They started by retrofitting the chain and putting in credit card machines, telephones, additional refrigerators, and more grocery options than the Sarasota, Fla.-based specialty food chain had in the past. Today, John Rorer is the sole owner of the chain, which now goes under the name Richard’s Foodporium. The chain has grown to 11 locations across Southern Florida, but Rorer sees significant growth ahead.

His ability to forecast such a positive future stems from the fact that he reorganized the company by starting with employees, not by adjusting the community-store feel that continues to be the strength behind the company’s brand. “I weeded out staff that I felt wasn’t growth oriented and created a strong management team,” said Rorer, owner and proprietor.

“I hired a retail operations, marketing, and data management directors and began studying our point-of-sale information,” he continued. His research quickly pointed out a lack of consistency across the chain.

“Each store had a different personality,” he said. During the previous growth spurt, managers had coped by determining their own product mix. Understanding the need to homogenize to build a brand, the newly formed management team started clearing out old product, streamlining processes and policies to get each location moving in the same direction.

In the midst of this process, Rorer closed a struggling location and acquired a competitor’s location. The new location was in bad shape from a design and structural point of view, so he took the opportunity to bring to life the vision he had of the new look and feel of Richard’s.

“I tried to marry the turn-of-the-century small grocer feel with bold red colors and modern, boutique-styled décor,” said Rorer. Customers liked the new design enough that they started asking Rorer if there were any franchise opportunities available.

“In Florida, we get a lot of snowbirds and people from other areas,” he said. “Those questions charged me up and intrigued me, and I started to look into how I could facilitate more growth with restricted cash flow.”

Seeing an opportunity to bring in franchisees as partners in growth, as well as partners in the investment and debt load, Rorer became more comfortable with the idea of franchising Richard’s. In the last four years, he’s worked on developing a solid brand, design, layout, and food complement that would be easily franchisable. In mid-August, the company became licensed to pursue franchising opportunities.

Although he’s changed a bit of the layout and design, Rorer has stayed true to the Richard’s brand that was originally developed by Richard Downey in 1979. The neighborhood format centers on stores that average 2,500 square feet, which he said creates an intimacy to build relationships with customers.

“Our employees and managers are trained to get to know people by name, get to know their families, and build that relationship,” he said. “We build tremendous loyalty that way, but keeping a small store format also enables us to move into smaller communities the big guys can’t.”

Building on a base

Some entrepreneurs may acquire a business and focus on making it bigger and better, but the way Rorer approached the acquisition of Richard’s was a bit different. Rather than trying to change the community store feel, he looked at ways to build on that base.

His desire to keep the Richard’s brand consistent has paid off when fighting against some of the bigger natural food supermarkets, not only in how he can expand his marketshare, but also in how he can keep his prices lower than most. “One of our monikers is affordable, natural, and specialty foods,” he said. “We know our business model operates in a niche no one really competes against.”

Although Rorer continues to stick to the Richard’s format, that doesn’t mean he isn’t an aggressive entrepreneur. With a future focus on franchising, Rorer purchased packaging and labeling equipment to delve into private label business.

“It’s a marketing model that brings people into our stores, but it also works because of the trust factor we have with our consumers,” said Rorer. “We’ve been in business for a little more than 30 years now; people will try almost anything we put our private label on.”

The possibility of franchising to areas outside of Florida has made Rorer rethink the warehouse strategy, but he has an idea of what he’d like to do. “I’d like to get a few stores going and eventually get up a secondary drop ship point,” he said. “We don’t need the full warehouse team or corporate staffing, but we can start off quite small and economically with those drop-ship points where we can bring in pallets of merchandise in bulk. That’s the way I’d like to grow.”

In addition to buying packaging equipment and building a business plan for franchising, Rorer has created a number of LLCs. Around packaging services, he’s created Commodity Packaging. He created another LLC called Opportunity Central Retail Services, which would help franchisees tackle construction as they start to build their own Richard’s location.

“If they want to hire another general contractor, that’s fine, but we have the experience and can probably save them money,” he said. “If we have to be there anyway, why not offer to do it ourselves as an alternative?”

Although these divisions operate under different names, Rorer has trained his employees to think of Opportunity Central as the umbrella over all of the businesses, including Richard’s Foodporium. In the future, Rorer wants to continue evolving Opportunity Central, creating verticals under it that all relate to each other. For now, though, he’s happy creating possibilities.

“In a year, I’d like to see the packaging company, retail services, and the distribution center break even and make money, and I’d like to see us have maybe five or six franchisees,” he said. “I’m going all kinds of places.”