Back to Profile Gallery > Ricker Oil 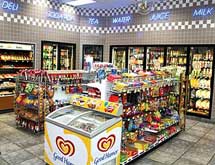 Convenience stores can make life easy on consumers, but it is a tough business for the owners. Fortunately for Indiana’s Ricker Oil and its chain of Ricker’s convenience stores, owners Jay and Nancy Ricker have found many ways to stay ahead of the competition. Founded in 1979, Ricker Oil has changed greatly since the early days. Jay previously worked for Shell Oil and started supplying dealers around the Middletown, Ind. area, driving a tank wagon while Nancy managed the books. Ten years later, Ricker Oil purchased its first convenience store in Middletown, and since that time the company has grown to include 49 company-operated stores.

Over the years, the company has essentially grown through a 50-50 split between acquisitions and new builds. All the company’s operations are in Indiana, concentrated in three areas as part of a strategy to build the Ricker’s brand and maintain managerial efficiency. Most of the company’s stores are in the Ft. Wayne area, Anderson area, and Indianapolis areas. In addition to the 49 company stores, Ricker Oil also supplies 50 dealers with fuel in Indiana.

In September 2008, Ricker Oil doubled the size of the company when it reached an agreement with BP to purchase all 32 of BP’s stores in the Indianapolis metropolitan area. The acquisition made the company one of the largest Indiana-based petroleum retailers and suppliers.

“As part of the agreement, the majority of the stores remained under the AMPM name, but we operate them, we own them, and they are run by our employees,” said Jay Ricker, president.

With the business now firmly focused on convenience store operations, the company has put a lot of energy into keeping up with the needs of the consumer. Most convenience stores, regardless of the name over the door, carry essentially the same things. Therefore, it can be difficult to construct a meaningful difference between one brand and another. Ricker’s has been able to do just that with the success of its Ricker’s Pop fountain drinks.

“Years ago, when we first got into the retail business, fountain drinks were kind of a neglected area in many stores,” said Ricker. “We decided to concentrate on our fountain drink program and have a one price, any size product to see if we could bump our sales by scale, and hopefully people would buy something else when they were in the store. We were able to do that in a huge way and it is really the reason we’ve been successful.”

“We’re a fairly small chain, but some of the larger retailers in the industry have told me that some of their strongest fountain drink sales in their entire geographic footprint are in the central Indiana area,” according to Ricker. “We’ve brought an awareness to the public, and we add a little twist to it. Customers can get an old fashioned fountain squirt, cherry or vanilla, so they can customize their drink as they go out the door.”

In addition, the Ricker’s brand has been built by making valuable community connections that go way beyond traditional marketing and advertising. The company and its founding family are heavily involved in several philanthropic endeavors in the city of Anderson, where the company is headquartered, and the surrounding Madison County area.

The company has been the leading sponsor for the Madison County chapter of Habitat for Humanity for years, donating on the corporate level and soliciting donations from customers. In fact, Nancy Ricker has served as president of the local Habitat for Humanity affiliate. She also serves on the board of the Anderson Symphony Orchestra, while Jay Ricker is a board member with Community Hospital and the Community Foundation. Ricker Oil also recently became involved with Alternatives, Inc., a social service organization dedicated to battling domestic violence. The company also supports local entities, such as Little League teams in each town where it has a presence.

“Kids are our customers too, and hopefully they will remain our customers as they move on to buying fuel instead of just candy bars,” Ricker said.

As the company has grown, its operations have become more sophisticated, and Ricker believes that fact is most important in the area of HR and employee training. Since most convenience stores offer the same products, the differentiating factor to making someone a regular customer is service. Because the company is spread out geographically, bringing all new hires in for a central orientation isn’t practical, so the company has put together training videos and runs computerized training programs emphasizing the importance of making each stop at a Ricker’s a positive and memorable experience.

“If you can bring those personal touches to your business, those are the things that can set you apart from somebody else,” said Ricker.

Having just completed a major acquisition during a recession, Ricker Oil has no plans to pursue any additional large acquisitions, however Ricker said the company is always on the lookout for choice locations and good deals, especially in Indianapolis. Part of the deal with BP included an agreement that Ricker Oil would add a specified number of stores over time, and the deal also included raw land that is ready to be developed. Indianapolis will likely be the company’s focus for growth opportunities, as its presence is still fairly small in what is the largest market in the state.

With a large percentage of its sales clearly based on fuel sales, the future of its business will depend heavily on the direction the auto industry takes when it comes to fuel. If electric cars or another fuel one day replaces gasoline-operated vehicles, it would require major infrastructure changes to the each location.

“The future of fuel and the government regulations mandating certain things are probably the biggest unknowns right now,” said Ricker. “But another reason we’ve been successful is because we lobby for our industry in Washington, and anyone in a retail business needs to be active and stay on top of policies affecting their industry so they can have an impact on the direction the future will take.”