Back to Profile Gallery > Sionic Mobile 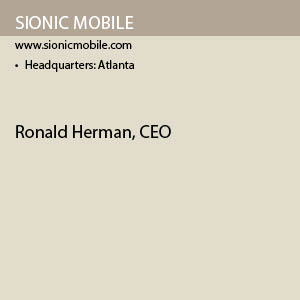 “Over the past six years, we’ve gone to the marketplace and tested our various components to see how they’ve worked, including testing behavior behind the counter with merchant staff. We believe we have perfected that,” he adds. “Then we tested our mobile payment platform and improved our fraud-detection system. We have a low-cost, quick-to-market way to test the functionality of our platform.”

Important Partners
The cloud-based mobile commerce company develops and provides loyalty applications for major corporations including General Motors, which uses ICE within its MyBuick, MyChevrolet, MyCadillac and MyGMC apps. Each of those apps includes the OnStar AtYourService platform, which offers special offers and rewards to customers. “That’s where our content lives,” Herman says.

In addition to powering apps offered by car brands, hotels, airlines, retailers and others, Sionic Mobile’s ICE system can be found within its own apps. The ION Rewards app, targeted to consumers, offers rewards points for goods from many national businesses. Mobile Rewards Marketplace (MRM), is a web and mobile app offered to businesses. Both apps are available for iOS and Android phones.

Sionic Mobile’s in-house development team writes the code for its mobile apps as well as for the ICE platform. One of the company’s contracted partners, The Websuasion Group LLC, developed and provides coding for Sionic Mobile’s website, web-based apps and MRM web portals. Sionic Mobile, its merchants and other partners use the portals to track transaction and customer information.

“Our web portals are an integral part of our solution; they allow users to see everything that’s happening on our apps in real time,” Herman says. “The Websuasion Group has done a good job of making our web apps accessible from all devices.”

Ongoing Investments
Sionic Mobile is now in what Herman describes as an “extreme growth mode” as a result of many new users its partners are bringing to its Marketplace. The company is increasing the number of merchant locations in which its apps are used from 108,000 to 2.2 million nationwide. “In the next 15 to 18 months we expect, between all of our mobile app partners, to have more than 200 million apps already present on users’ first or second screen,” he says.

To handle this new traffic, Sionic Mobile is working closely with Chase to ensure payments are processed effectively as well as investing heavily in cloud storage. The company’s platform resides in Amazon’s cloud and is supported by servers located regionally for fail-safe and redundancy.

Sionic Mobile is also investing heavily in its proprietary GeoSense® iBeacon network. The company is equipping all of its merchant locations with iBeacons, which support push notifications to apps equipped with its beacon listening code. These notifications include welcome messages as well as one-tap mobile checkouts, both of which drive more frequent app use. “We’re expecting, by this time next year, to have more beacons in more places than anyone else,” Herman says.