Back to Profile Gallery > Sourcing from China 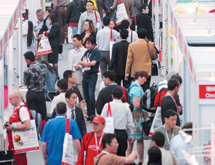 The China Sourcing Fair returns to Miami June 25 to 27 to offer an array of Chinese-made consumer products that buyers and retailers can purchase directly from more than 630 Asia-based manufacturers so they don’t have to travel to Asia to do it. The Miami show will feature exhibitors that produce consumer electronics, gifts and premiums, home products, fashion accessories and garments.

Now in its third year, Miami was the logical city in which to hold the event, according to its organizers, Global Sources. “We were looking for a location that served both buyers in North America as well as those in Central and South America,” says Bill Janeri, general manager at Global Sources. “A large volume of trade is conducted between Asia and these markets, so to meet our objective of organizing the show closer to those buyers, Miami was the logical choice. It is centrally located, has a multilingual business community and has an international-trade focus.”

Markets like the United States are already importing a significant amount of products from China. But in more developing markets throughout Latin America, this trade is really just taking off. “As an economy stabilizes and expands so does its middle class,” says Janeri. “A growing middle class brings more disposable income and growing demand for consumer products – like mobile phones, large-screen TVs, and nice items for the house.

“In its first two years, the fair in Miami has started establishing itself as a doorway into Latin America’s retail and consumer products distribution channels,” Janeri continues. “Growth in these up-and-coming markets is attractive to North American-based suppliers and retailers, who might be interested in tapping this growing demand.

“At the same time, in many of these markets, the product distribution systems are becoming more sophisticated,” he adds. “These markets are making the transition from mom-and-pop shops, to networks of world-class retail outlets on par with those in any other market in the world. To fill those shelves, importers and purchasing managers look to China for well-made products at price points where the retailer has more flexibility with the margin it charges.”

A survey conducted by Global Sources Exhibitions of 548 attendees at the Miami China Sourcing Fair in November 2012 indicated that 70 percent of respondents specify and approve the products their companies will purchase. Additionally, 79 percent of the respondents said that their average order with manufacturers is more than $25,000.

The China Sourcing Fair also will feature an exclusive “How to Source from China” conference program to help attendees understand the ins and outs of buying from China.

With the emergence of the Internet over the last 15 years, trade around the globe has never been easier. However, trade shows still play a critical role in the product-sourcing and supplier-evaluation process.

For more than 40 years, Global Sources has built its business on bringing together the world’s buyers with Asian manufacturers. “Email and the Internet have certainly made trade easier and faster,” says Janeri. “However, when you’re investing thousands, hundreds of thousands or even millions of U.S. dollars with a supplier, ultimately you want to sit across the table from them and look them in the eye. You want to see how they operate. You want to meet the management team you’ll be working with. You want to evaluate, face-to-face, whether this is a company you can work with. By bringing these suppliers to the buyer, the China Sourcing Fairs make that part of the process so much easier than it has even been in the past.”

China produces a dominant share of many of the world’s consumer products. Over the past 20 years, the quality of those products has improved exponentially. Today, many of China’s exporters operate at ISO standards and have various international certifications for product safety and quality.

“It is no longer the case of, ‘Can China produce it?’ – China already produces it,” Janeri maintains. “The question today is about what level of quality the buyer wants, and what quality level that buyer’s customers are demanding or are willing to accept.

“Many of the exhibitors at our China Sourcing Fairs have been exporting globally for years – and for some of them, decades,” Janeri adds. “They are the brands behind the brands, manufacturing products for some of the world’s leading companies. By coming to Miami as part of the China Sourcing Fair, these companies are hoping to meet and do business with buyers they don’t know and who don’t know them.”

Some of the Largest Shows

Launched in Shanghai in 2005, the China Sourcing Fairs quickly caught on in other key markets around the world. Today, they are some of the largest China-products events in the markets where they are organized.

These include Hong Kong, India, South Africa, Sao Paulo and Dubai. Although they are organized in different parts of the world, the events have one focus – to provide buyers with direct, face-to-face access to a large number of suppliers from Greater China, which includes China, Hong Kong and Taiwan. Learn more about the Miami China Sourcing Fair at www.chinasourcingfair.com/miami.