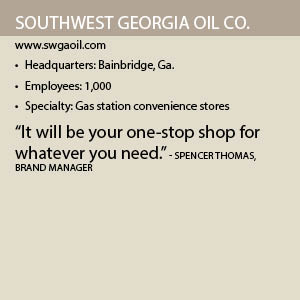 “[S&S] didn’t feel like one of these major players had the same care and respect for the people,” Thomas explains. “They turned down big offers from them. We’re a family-operated company like S&S was.”

The purchase signaled a shift toward expansion for the company. Southwest Georgia Oil now has 75 locations in Georgia, Alabama and Florida. Although they shared common values, the sudden tripling of Southwest Georgia Oil’s footprint did pose some challenges. Maintaining more than 70 stores across three states requires more time and strategic planning to execute a plan than when the company managed 25 locations. “We’re not as agile as we used to be as far as implementing change but we will be there soon,” Thomas says.

The addition also created three distinct brands within the company – S&S Food Stores, Sun Valley Market & Deli and Inland – making it difficult to build wider recognition and loyalty among customers. To solve that challenge and standardize its operations, the company is developing a new brand called Sunstop that will consolidate all of its stores under one banner. “We’re in a big-time branding mission right now to finish up this next-generation image that has our new logo, our new name and throw that out to all our stores,” Thomas says.

The rebranding overhaul will go beyond the name and colors of the convenience stores. “We’re really looking a lot into technology right now,” Thomas says, “from digital ordering kiosks to digital menu boards.” Investing in technology, such as Verifone POS systems, will help the company standardize its stores, improve its agility and remove barriers to rolling out improvements.

The Sunstop branding will be rolled out to stores based on volume, competition and location. About five upgrades are expected to be finished this year. “It’s probably going to be a five- to 10-year plan to get every store under the same name, but it’s eventually going to happen,” Thomas says.

Sunstop stores will have a modern, Florida-inspired look, Thomas says. The design features bright yellows, blues and reds, with an earth-tone look for the store buildings. The colors were chosen to complement Southwest Georgia Oil’s gasoline brands: yellow for the Shell locations, blue to match Marathon and red for the Inland brand.

Southwest Georgia Oil can balance those segments of the business because of its strong leadership and dedicated employees. “We have a very good culture with our company,” Thomas says. “We have awesome employees.”

Southwest Georgia Oil’s board of directors alone has more than 100 combined years of leadership experience, all of which are committed to the growth strategy. “They’re just doing a great job leading our company to be successful and working as a team to get our company to be what it is today,” Thomas adds.

The Sunstop name will not be limited to gas station convenience stores. Southwest Georgia Oil also plans to use the brand to introduce a new kind of store concept: a combination supermarket, deli, convenience store and filling station called Sunstop Market. “It will be your one-stop shop for whatever you need,” Thomas says.

The creation of Sunstop Market was made possible by Southwest Georgia Oil’s recent purchase of three former Walmart Express stores, smaller versions of the well-known big-box store that are typically 10,000 to 12,000 square feet in size. The stores already have the infrastructure in place for gas stations leftover from their Walmart days, making them ideal candidates for conversion into Southwest Georgia Oil’s new concept.

Although Sunstop Market will have a similar all-in-one concept to the Walmart Express stores, Southwest Georgia Oil is taking care not to repeat the mistakes of its predecessor. It hired a design firm from Atlanta to reconfigure the stores’ look and is developing ways to enhance the concept to make it more appealing to consumers. The details are still being worked out, but the first Sunstop Market is expected to open by the end of this year.

The combination of the Sunstop brand coupled with the new store concept will elevate Southwest Georgia Oil as it prepares for its next stage of growth. “We’re going to be one of the top brands once we roll out this new image,” Thomas says. “We’re going to be able to compete with whoever we want.”