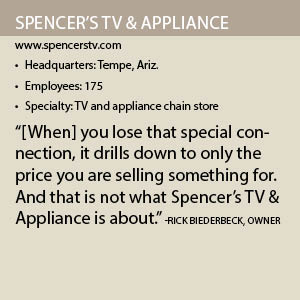 Biederbeck’s father retired from the company in 1996, leaving his son in charge. “I said OK and that I’m going to do some things differently. So almost immediately I opened up a second store and in the next five years I opened up three more stores,” Biederbeck explains. “In 2008, I bought our largest competitor, who had five stores also. So we have 10 stores in total today.”

For the past 40 years, Spencer’s TV & Appliance has been a family owned and operated company, selling bedding, appliances and electronics. The company has become known for providing its customers with better service.

According to Biederbeck, Spencer’s TV & Appliance’s “aggressive” advertisement campaigns have worked in the company’s favor. “One of our mottos is that no matter where you see it, hear it or read it, we’ll beat it,” Biederbeck says. “Customers say they want selection and we offer every major brand in our stores. If they want good customer service, they will also find it here. I think we have the best service because customers can buy whatever they want in one of our stores, even late in the evening, and they can get it the very next day.”

In addition, one of the keys to the company’s success is its emphasis on the salesperson. “I think national brands have gone away from the salesperson because they feel like the salesmen may be a costs burden,” Biederbeck explains. “In our stores, the salesman owns the sale all the way through. They work off of 100 percent commission, too, which teaches them how to run the system and learn how to do the very best they can.”

Biederbeck notes that the company is able to keep salesmen because they pay better and encourage them to be better. “I recently hired my No. 1 salesman an assistant. I wanted him to be able to be better at what he does,” he says. “I did that because he does such an amazing job.

That type of buy-in goes a long way with employees as they feel they are important, wanted and appreciated, Biederbeck adds. “The most expensive thing you can have is a changeover in employees,” he says. “You not only have to hire good employees, but more importantly, you also have to keep those good employees. If you lose an employee that is bringing in that kind of volume, it affects the bottom line. Even if someone has experience when they come to work for us, it takes more than 10 years for them to hit the highest level of income that they can make. We do not limit them on earning power.”

Another key to the success of Spencer’s TV & Appliance is its employees. “I let all 175 of our employees know that I have their backs,” Biederbeck says. “I’m going to call them to task when they do something wrong, but I am also going to support them and do my best to take care of them.”

For that reason, about two years ago, Spencer’s TV & Appliance became an employee-owned company. Today, every employee owns an equal share of the company.

“As the company continues to grow and I get closer to the end of my career, I felt like this was the important thing to do,” Biederbeck explains. “You may have problems from time to time with customers or suppliers, but the one area you cannot have problems in is your employees. I believe that by selling the company to the employees, as a company we would have more people who understood the business of making money and being profitable. My goal 50 years from now is that this company is still around. Although you cannot ensure that, this is one of the best ways to put it on a path to happening.”

Before Biederbeck retires in the coming years, his goal is to open a few more stores and own all of the stores that the company currently has leased. “When I step down, that is what I want,” he says. “So as an employee-owned company that now owns all of its properties, we do not have to pay rent. And if we do not have to pay rent, we’re achieving more income that can be invested into the company and, of course, be debt free. I think the company will have a higher chance of succeeding in the years to come then.”

Spencer’s TV & Appliance also values its relationships with its suppliers. “With vendor relationships you have to do your best to be their friend because they want to see you as an ally,” Biederbeck says. “At the same time, you both have to be on the same page in regards to business and know what is expected from the both of you. You have to respect each other and be friends at the end of the day. I’m proud to say that some of my best friends are our vendors and I enjoy the time we have worked together.”

“I feel like the Internet sales is a different business from retail sales,” Biederbeck says. “Although we do have a website where you contact us or find our phone number to call us, we believe that technology cannot replace the human connection. If you take a person from 100 or even 1,000 years ago, the one thing that’s consistent is that a person is a person.

“As humans, we like to hear another’s person’s voice or shake another person’s hand,” he continues. “Customers liked to be thanked for their business and know that they got a deal and attention during the transaction. I cannot figure out a way to really do that on the Internet. So when you lose that that special connection, it drills down to only the price you are selling something for. And that is not what Spencer’s TV & Appliance is about.”

Biederbeck adds that he wants customers to walk away from the company’s stores happy. “If we don’t capture customers, let’s say in California, I am OK with that because I think we are doing a great job of capturing the people around our stores,” he explains. “You cannot be everything to everybody, and when you try to be you can end up failing at one thing and likely doing the one thing you do well poorly. That is why I made the decision to do retail right at Spencer’s TV & Appliance. As for the rest of it, if it comes it will.”

Spencer’s TV & Appliance does not offer any loyalty programs, noting that it has captured customers with advertisements and by keeping its salesmen informed. “For example, I teach our salesmen that customers are not buying a refrigerator from Spencer’s, but that customers are buying that refrigerator from them,” Biederbeck says. “If they create the loyalty as the salesperson, the customer will repeatedly come back.

“So I teach them that their goal is to be the guy customers are recommending while out with friends, family or out in the community in general,” he continues. “They have to make such an impact to where the customer can refer them by name and even give their phone number, if necessary. To me, that is what creates the loyalty with customers. It’s not that you get 85 points, for example, for buying this washer. It’s about making the customer happy, and if they are happy they will come back and bring others.”

Spencer’s TV & Appliance recently finished renovating all 10 of its locations, adding new flooring and ceilings, LED lights and debuting new colors. According to Biederbeck, the goal is to keep customers coming back.

“We wanted to reflect more of what customers see in magazines or at home,” Biederbeck explains. “It was time for us to have a fresher look. For example, if you go into Starbucks you can tell that they invest into their business and customers love that because it’s something they want to see. The same goes for the customers, employees and vendors at Spencer’s TV & Appliance – a fresh look will keep people coming back.”