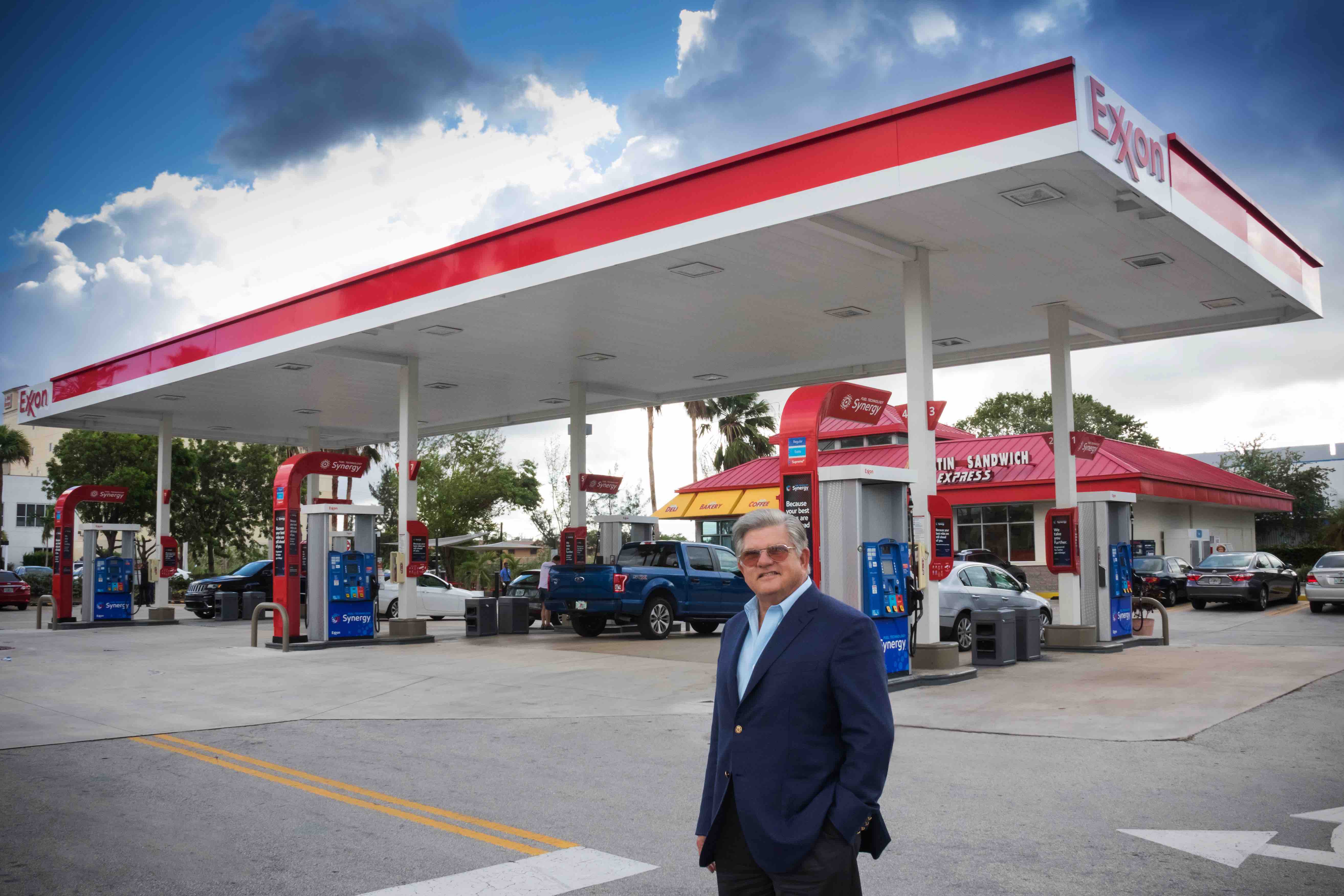 Sunshine Gasoline Distributors continues to expand by holding on to its core values and remaining flexible in an ever-changing industry. By Janice Hoppe-Spiers

Thirty years ago, Maximo Alvarez seized the opportunity to purchase four underperforming gas stations in south Florida. Although many people told him it was not a wise decision, Alvarez knew the stations were in good locations and would thrive under the right management.

Today, Sunshine Gasoline Distributors is one of the largest distributors in the state, supplying more than 500 gas stations and owning about 350 of them. “March 19, 1987 has tremendous meaning to me because I was the one who purchased the locations,” Alvarez says. “A lot of people said it wasn’t a wise decision because those locations weren’t any good. Coincidentally, my very first job in 1971 was as a field representative for an oil company. I was in charge of supervising 20 stations in the area. I knew those four stations were good sites, but just not managed properly.

“The oil industry executives at the time saw those locations as undesirable locations because they were not meeting their volume objectives,” he continues. “I was convinced they were good locations. I proved that correctly and they are still four excellent, grade-A locations 30 years later.” 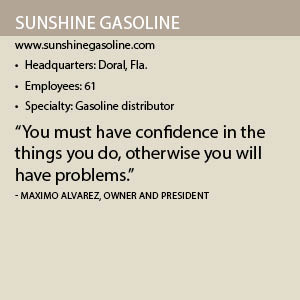 Sunshine Gasoline attributes its success to many factors. “It is very important to remain flexible in an industry that has seen dramatic changes since I started in 1971. I feel that everyone in the industry who has been able to adjust and accept changes have become successful. It is also important to maintain your core values and operating with a no-nonsense, positive attitude,” Alvarez claims. “Being a sole proprietor has made it very easy to make fast decisions. But making fast decisions is not the only key to success. You have to also be sure that you have good employees whom you can trust. I do my best to surround myself with good people.”

“Throughout its life, Sunshine Gasoline has enlisted the aid of former major oil company employees to contribute to its years of experience in the business,” the company says. “The combined knowledge and experience allows the company a leading edge and remarkable insight to the world of light oils retailing. We share this knowledge freely and it is greatly used to the benefit of all our clients and business partners.”

Sunshine Gasoline currently has 61 employees, which include Alvarez’s three children. He sees them as the future of the company. The company’s gasoline brands include Citgo, Chevron, Texaco, Shell, ExxonMobil and Marathon.

The gas station industry is ever-evolving and has seen a number of tremendous changes over the past 50 years, Alvarez says. “Back in 1971, every gas station was full-service and then they became self-service,” he remembers. “I was a rep at that time and independent operators who were franchising the locations literally handed us the keys to the business and said, ‘My customers have high-end cars and won’t pump their own gas.’”

The industry then changed from automotive mechanical repair shops to convenience stores. “I had many operators who were running mechanical shops and now they had to sell Twinkies?” Alvarez says. “They accused the oil companies of putting them out of business, but they chose not to adjust to the business.”

As laws and regulations became more restrictive, so did the gas station industry. During the 1990s, there was a seismic shift from leaded to unleaded gasoline and stations went from carrying two fuel products to three. Over time, the oil industry – as well as many others – evolved from a cash-only to a mostly credit card business. “You must adjust, accept it, run with the ball and stay with the industry,” Alvarez says. “Flexibility is an important factor to being successful.”

Sunshine Gasoline continues to stay abreast of the latest technology as it has become increasingly important in the oil industry. “Technology is moving so fast, but we stay up-to-date because it’s important for any business in today’s market,” Alvarez adds. “I am blessed because both of my sons love technology, upgrading and keeping up with today’s changes. In addition to my children, we partner with information technology specialists, vendors and other companies that help keep our technological edge up-to-date.”

Although flexibility has been a contributor to Sunshine Gasoline’s success, Alvarez says staying true to his core business and moral values has put his company at the top. His core values include responsibility, honesty, integrity, perseverance, respect and confidence. “Those cannot be compromised,” he says. “I’ve been heard saying, ‘I guess I’ll just have to swallow that pill’ because someone has made an offer that would have a negative impact on our business to the benefit of the other party, but we go along with it anyway because if we did not, it would compromise one of those values. You must have confidence in the things you do, otherwise you will have problems.”

Alvarez was taught his values at an early age from his parents, beginning with treating people the way he would like to be treated. “I remember my dad using an easy example, pinching,” he remembers. “He would say, ‘If it hurts when someone pinches you, then you don’t do it to someone else.’ I learned family values from my mom and dad and from my tremendous, excellent and strong Catholic upbringing. I attended Catholic schools that emphasized family values and the same things my parents taught me by example.”

Because of his upbringing, Alvarez is very involved with many charitable organizations. One of them, The First Tee, an organization that positively impacts the lives of young people by providing educational programs that build character, values and promote healthy choices through the game of golf. Over the years, The First Tee began blending the rules of the game with life and leadership skills, so underprivileged children and teens didn’t just learn how to play golf, but were learning important values in the process.

“The First Tee teaches young people core values while playing golf,” Alvarez adds. “I was using core values in business way before I joined The First Tee. I learned about this as a very young kid from my parents that those values can’t be compromised.”

Sunshine Gasoline maintains a family culture. “I will continue, until my last day, to run Sunshine as a family business with family values,” Alvarez says. “Anyone who wears the Sunshine logo has to feel like they are a member of the Sunshine family. We take pride in our employees and we want to convey that pride by treating them as we would want to be treated. That will not be compromised and my children understand that very well.”

In terms of business values, Sunshine Gasoline operates under the basic rules of retail, which include hours of operation, appearance, service and competitive pricing. “Any retail business that adheres to those factors are successful,” Alvarez says. “Those are very important factors to which I attribute our success.”

Although the core values Sunshine Gasoline operates under are important, Alvarez says being aggressive has also proved beneficial. “I was blessed with the virtue of being aggressive,” he explains. “I am totally committed to the business I started when I had practically nothing. I knew very early on that volume was very important in the gasoline retail business. Constant, steady growth is almost required. I am still aggressive now and I see my children following in the same footsteps, which will take the company to another level.”

In its 30-year history, Sunshine Gasoline has never closed or lost one gas station. Throughout the years, the company has seized the opportunity when oil companies were exiting the retail business and assets were being divested. Alvarez says he pursued those opportunities aggressively. “For example, we purchased all the assets that BP and Shell had in Dade County and a few in Broward County,” he adds. “I had the good fortune to grow by aggressively taking advantage of these opportunities.”

Even though his mind was set on acquisitions, Alvarez says obtaining bank loans in 2008 and 2009 was a challenge after the stock market crash. “We had to finance most of those acquisitions,” he remembers. “I came to the area [from Cuba] in 1961, grew up in Miami and have fostered great local relationships throughout the years. The fact that we have been in the area for so long establishes history. I have tremendous credit and I tell my children that credit comes from paying off your debts in a timely manner. Credibility is the trust that you have earned from the lending institution from paying your debts on time. With lots of credit and credibility, we were able to finance all acquisitions.”

Moving forward, Sunshine Gasoline plans to continue to grow and remain the local, neighborhood business it has always been despite the restrictive regulations that impact small businesses. “I have been very fortunate by being totally committed to what we do. We have been able to grow while other local distributors have decided to leave the business because it’s difficult to put up with government regulations on all levels,” Alvarez admits.

“The last time I looked, 75 percent of the labor force is hired by small businesses,” he continues. “There are no more local hardware stores, pharmacies, mom-and-pop grocery stores or local gas stations. That’s a big concern. We – the small businesses – are the ones who create jobs and treat our people much better than big business. When you talk to most Americans, they mostly worry about job security and employment. These bad business regulations are killing the small business and we need to change that. We are local. We are your neighbor and have a philosophy of neighbors helping neighbors.”

Although the regulations may dissuade companies from growth, it hasn’t kept Sunshine Gasoline down. “All we can do is try to influence our legislators to make sure they understand overregulation is not good for business, the country or our economy,” Alvarez says. “It is a big challenge for us to make sure we continue to be successful in our business. It is not only the people in our family, but our vendors and suppliers who depend on our success, as well. It is important that we stop government regulations that continue to be detrimental to our economy.”

Sunshine Gasoline will continue to grow and purchase service stations at every opportunity it gets in the south Florida area. “We started in Dade County and now cover an area that spans from the Florida Keys to West Palm Beach. We try to stay local so we can have a substantial presence in the area,” Alvarez says. “We will continue being flexible and adjust to changes, but never compromise our basic values. That is my vision and the vision I have for my children. It is, in fact, our succession plan.”

The company plans to continue to acquire assets within its market area where it can have a greater impact. “If what I had today was spread all over Florida we wouldn’t be as impactful,” Alvarez explains. “We concentrated in a small area and continue to grow there so we can be meaningful. We do try to grow within our family and expand as much as we can.

“We have been very successful and I thank the oil industry for giving me the opportunity to learn when I had nothing,” Alvarez continues. “Oil has been good to us and we remain devoted to its continued success because it is so very important to so many people in our country. I do not have enough words to express my gratitude of the blessings I received when I arrived in this country. None of this would have been possible if I was not accepted by the most generous country in the world, and I thank God for that.”