Back to Profile Gallery > The Coca-Cola Company 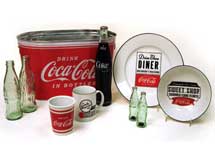 In two years, Coca-Cola will be celebrating its 125th anniversary, and as a brand, there is a lot to celebrate. For Kate Dwyer and her team, the company’s global licensing division, there is a lot to do to get ready. “For us, licensed merchandise is a celebration of Coca-Cola’s rich heritage dating back to the 1880s,” said Dwyer, the group director of worldwide licensing. “The story of Coca-Cola is exciting and vibrant, and we look forward to showcasing it again in a new way in 2011.”

Coca-Cola was invented in Atlanta, Ga. in 1886 as a combination of local pharmacist Dr. John Stith Pemberton’s unique syrup and carbonated water and was first sold at Jacobs’ Pharmacy as a soda fountain drink for five cents per glass. The Coca-Cola logo was invented by Dr. Pemberton’s partner Frank Robinson, who drew it himself. That logo is now sported on products in nearly every category and in nearly every country in the world.

The licensing process starts with the beverage, which is enjoyed 1.6 billion times every day, and focuses on products that will enhance the consumption experience. From there, she and her team look for best-in-class partners to produce bottle openers and coolers as well as the famous glassware.

“We look for partners who will invest in our brands with us and develop unique and proprietary offerings,” Dwyer explained. “Our merchandise strategy starts first with the beverage and then we move outward and identify other relevant categories.”

The value of vintage

In 2008, the licensing industry as a whole was down by 14%, but Coca-Cola’s worldwide licensing division was up 17%. Dwyer said the division’s global footprint insulated it from the especially weak economies in North America, Europe, and Japan, adding that Brazil preformed especially well this year.

One of the reasons for such success, according to Dwyer, is the division’s emphasis on and ability to leverage design. The division has a design team on staff that produces on-demand product development for licensees, though that job is made easier with more than century’s worth of art to draw from.

As part of the celebration for Coca-Cola’s 125th anniversary, Dwyer and her team are working with the global marketing division to develop a style guide of the company’s art and history called Coca-Cola Through the Decades. It will be the most comprehensive style guide the company has ever released, but it’s impossible for any publication to include every design and concept the company has used.

Though the division is still deciding how to bring the style guide to market and what other merchandising options would compliment it for the anniversary, Dwyer said she has high expectations since just about any vintage Coca-Cola branded product is a hit. That’s why the worldwide licensing division follows the brand sensibility and strategic direction but typically pulls art from past decades.

“Vintage is appealing to every consumer segment; even teenagers, who buy t-shirts with advertising slogans years before their time,” Dwyer said. “We have several new products that we are excited about for 2010 including an authentic reproduction cooler with a 1950s metal look and a new glass inspired by our Hutchinson bottle, which was used to distribute the drink in the late 1800s.”

But Dwyer’s goal in the years to come is to take Coca-Cola products into the future through sustainable and eco-friendly manufacturing processes. Since 2007, many of the division’s apparel products are made with recycled plastic bottles. She said her mission to make these products as green as possible comes from the second key reason for the division’s success: strict adherence to the six P philosophy developed by the main company.

The six P’s are profit, people, portfolio, partners, planet, and productivity. Each division does business according to this list of values, and the worldwide licensing division is no different. For planet, Dwyer aims to switch production of its entire apparel line, which makes up 40% of its products, to recycled sources. The division also recycles discarded packaging labels to create new products and has partnerships with chemical companies to develop new ways to use recycled PET plastic in the production of hard goods, like coolers.

Another P, partners, has also received attention in the last year by way of a major investment in the division’s CokeMap interface. The system, which is about seven years old, was designed internally to be a one-stop shop for licensees, including everything from applications and approvals to royalty income reports and even design programs.

Based on regular surveys with licensees, the division improved aspects of the system like bringing the entire approval process online and installing an automatic notification system. Dwyer said with these improvements, she hopes to make the licensees’ lives easier.

“By leveraging the strength of our brands and staying focused against marketing, we’re seeing much stronger growth and success than many of our competitors, and, despite the challenges ahead, we see significant opportunities as we approach our 125th anniversary,” concluded Dwyer.