Back to Profile Gallery > The New Nokia Super Smart…Skirt 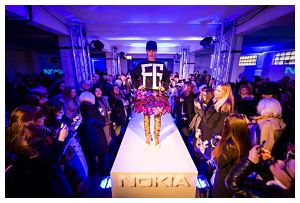 February 14, 2014 – Nokia has partnered with Fyodor Golan for London Fashion Week to create the world’s first interactive skirt made up of Nokia Lumia 1520 smartphones. The innovative skirt was designed by the Fashion Fringe winners and created by Kin and uses static pictures captured by the phone, or live feeds on the 80 screens that adorn it – allowing it to change around the wearer and their day.

Images on the screens change color as the skirt moves, creating a shimmer effect simulating the realistic tactile character of actual fabric. This is achieved through a purpose built app that utilizes global positioning, to ensure the shimmer happens in line with the models movement. It is believed that this is the first time a skirt of this kind has been created.

Annie Kearney, Nokia Brand Lab, said: “This unique project is about exploring the possibilities of smart technology and fashion coming together, as well as supporting new talent to create something special using the beautifully designed Nokia Lumia 1520.”

To build the skirt, Kin worked interactively with a combination of software such as Python and C#. Initial drawings were sketched along side Fyodor Golan. The sketches were then developed using engineering tools and rapid prototyping tools such as 3D printing and laser cutting to evolve the initial design.

Of their new collection and working with Nokia, Fyodor said: “This A/W 14 season we toyed with tradition against technology. We believe that you can create almost anything that isn’t influenced by gravity. The colour changes as the skirt moves and the idea of making the screens react to the word around it via photographs and video is something that we do not think has been done before.”