As a co-op, TCCP is a member-owned organization, which gives its owners an incentive for it to succeed. While some competitors may keep their customers at arms’ length, Twin Cities Co-Op Partners’ shoppers regularly give them advice and offer their expertise about its products.

“Our customers appreciate having a greater say in the business,” he says. “And owners receive benefits throughout the year and a designated percentage of annual profits from the organization. The co-op grocery model creates a greater sense of connectivity to your food and how it’s being grown.”

The company also prioritizes giving employees an active voice. “I believe in an environment of continuous improvement where everyone has ideas and is encouraged to bring them forward,” Resnik says. “That creates a place where people want to work.”

Based in Minneapolis, Twin Cities Co-Op Partners was formed in 2017 from the consolidation of the Wedge and Linden Hills Co-ops. Both the Wedge and Linden Hills were successful co-ops that have served their neighborhoods for over four decades. The consolidation was the largest in history between two retail grocery co-ops. They decided to come together as one organization because they each had similar missions, and believed they could better serve their owners and community as one entity. 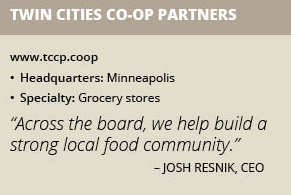 “We have been successful in fulfilling on the goals of the consolidation,” Resnik said. “We have managed to lower prices for customers, provide new benefits for employees, and expand community programs, while delivering on efficiency goals.”

TCCP is a unique organization – with four distinct business units. It currently operates two high-volume grocery stores in Minneapolis (still known to the public as the Wedge Co-op and Linden Hills Co-op), manages a foodservice facility with a commercial bakery and kitchen, catering operation, and a mini market/café, and operates Co-op Partners Warehouse — a food distribution business  with over 400 customers across a seven-state area. Co-op Partners Warehouse has operated since 1999, and helps connect local organic growers and producers, as well as small organic farms outside Minnesota with co-op groceries, independent retailers and restaurants and cafes across the Upper Midwest.

Twin Cities Co-Op has a reputation for high-quality produce, which is sourced from local farms in-season and through Co-op Partners Warehouse year-round. “We have close relationships with organic farms. It is a true partnership,” Resnik says.

The mission of Twin Cities Co-op Partners is “to build community by developing a strong, local food system.” This is something it takes seriously in everything it does. “Whether it’s buying from the local farmer who is growing microgreens or finding a local startup producing salsa, we like to provide a market for these local producers,” Resnik says.

Resnik adds that he knew of the company’s reputation for produce long before he came on as CEO. “I started shopping at the Wedge a decade before I worked here. I wanted the best quality ingredients and I thought the quality of the produce was second to none,” he recalls. “The more I shopped there, the more I learned about all the other great things the Wedge had to offer.”

TCCP’s connection with the local food community extends well beyond produce and local groceries. Recently it has developed partnerships with everything from a beloved local bagel shop to a Thai restaurant. “We are the only local grocery store to sell Rise Bagels – and growing up in the New York area – I can tell you that these are the real deal,” Resnik says. “And we serve a couple Thai curry recipes in our hot bar from the popular Sen Yai Sen Lek restaurant.”

The high standards extend to the Meat and Seafood department where it has strict animal welfare criteria. “We’ll visit the farms,” Resnik says, noting that this has helped nurture a loyal customer base for Twin Cities Co-Op. “They know that they can trust us.”

Like many markets around the country, competition in the natural food space has become much more intense in the Twin Cities over the past decade. Many new stores have opened up and existing stores are placing a greater emphasis on natural and organic food.

“A lot of people will put pretty pictures on the wall and evoke farmsteads, but the quality of the product does not always match the quality of the art,” he explains. “It raises the bar for us. We need to tell our story in an authentic way and keep delivering the best quality food.”

This has driven TCCP to improve its marketing efforts. “Transparency and authenticity are more important than ever. Some retailers try to pull one over on customers,” he says. “But I believe our customers know the difference. We need to keep earning their trust every day and do our best job at being true to what we’re about and letting people know that there is a difference.”

TCCP has invested a lot over the past several years to continue its growth. The foodservice facility was built in 2015, both grocery stores underwent significant renovations in 2016, and it has made major upgrades at its warehouse to help support that growing operation. Both store remodels put a stronger emphasis on its meat and seafood and prep food areas while also modernizing the shopping experience.

“We want to improve the food quality for the whole upper Midwest,” he says, noting that Twin Cities Co-Op is currently determining its next stage of growth. “We’re always open to the idea of another retail outlet, but we also see expansion opportunities in our wholesale distribution business.”

Although the local metro area has seen an increase in natural and organic stores, “There are still some neighborhoods in the Twin Cities that are underserved,” Resnik says. “What we offer is pretty unique and even if there are other natural food stores, we can provide something that is truly special and a great benefit to other communities.”