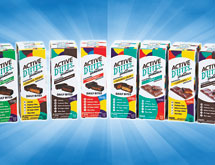 People want to eat right, but more often, they want to eat what tastes good. Products that give them the right nutrition – such as the probiotics and prebiotics that aid good digestion and strengthen the immune system – may have the healthy ingredients and functionality nutritionists advocate. But to be consumed regularly, they also have to be something that people not only feel they should eat, but also crave.

“All my products have to pass my test,” insists Gerry Morrison, owner of Wasatch Branding Concepts LLC, which is developing Active D’Lites chocolate bars, individually wrapped bites, ice cream bars and shakes containing probiotics and prebiotics. “I have to make sure these are something that I want to eat. If it’s good enough for me, it’s good enough for a lot of people.”

Morrison says food scientists often overlook this aspect of healthy food formulation. “You can hire some guys that are Ph.D.s and have lots of background and education, but sometimes they can’t make anything that tastes good,” he laments. “Consumers don’t have to settle for something that tastes like cardboard because it has the functionality.”

This reality is not lost on retail buyers when they are sampling new products. “They see the uniqueness of it,” Morrison says of buyers. “We cut half or two-thirds of the calories out of the product, as well as cut the sugars out, and we have the significant, pleasurable taste. When you eat this stuff, you really think you’re eating a high-fat, full sugar [product]. It’s completely functional. We did the same thing with ice cream and chocolate. Our main sweetener is stevia. It’s very friendly for diabetics, so we don’t have this rise in insulin. When buyers taste this, they’re really blown away.”

Wasatch Branding Concepts LLC is putting the finishing tastes in the product and touches on the packaging of a line of new products it has created that provide probiotics and prebiotics – which it calls “synbiotics” – for healthy digestion. Morrison – whose last product line called CarboLite was low-carbohydrate chocolate to complement the Atkins low-carb diet – considers himself on the cutting-edge of a trend in healthy desserting.

“We’re ahead of the curve, but in the rearview mirror, I can see a tidal wave coming,” Morrison predicts. “It’s going to be a tidal wave, because there’s so many benefits of the brand.” Morrison’s enthusiasm is backed up by years of clinical research by suppliers that indicate bacteria classified as probiotic aid healthy digestion. They occur naturally in fermented products such as yogurt, kefir and sauerkraut, and in artichokes and chicory, Morrison says, but when is the last time you purchased sauerkraut for your digestive well-being and health?

Because probiotics are living microorganisms, they must be stored carefully, even if they are in a powder or capsule. Some need to be refrigerated, and all must be used before their expiration date, notes the American Gastroenterological Association. Morrison has solved the temperature requirement by putting the probiotics in the chocolate coating of ice cream bars – which stay frozen – and in chocolate.

“What’s so beautiful about the probiotics in chocolate is it really gives a medium that is ideal,” Morrison points out. “If that chocolate gets over 90 to 100 degrees, it will melt the bars, and therefore it will not be purchased. With temperatures above 110 degrees, the actual strains will not survive, and therefore, how one handles and stores probiotics becomes vital.”

Some of the Active D’Lites chocolates, ice cream bars, bites and shakes from Wasatch Branding Concepts are being sold on the company’s website, www.activedlites.com, and Morrison says he is finalizing deals with major retailers to carry his products. He has just completed a chocolate formulation without genetically modified organisms (GMOs), which will be in all future chocolate products.

For the Active D’Lites probiotic chocolate bars, Wasatch Branding Concepts has developed vertical packaging. “Traditionally, a bar lays horizontally on the store shelf, but our bar stands vertically in the package,” Morrison points out. “So we only take about 2 inches of space per SKU versus 8 inches with competitors’ SKUs. Active D’Lites currently has 12 SKUs, and with our first-to-market vertical packaging, we take only 24 inches of shelf space for all 12 SKUs! Compared with a traditional shelf space for 12 SKUs of up to 96 inches, we save the retailer over 6 feet of shelf space. This is another major point of difference. Retailers love that because they can put more SKUs in less shelf space. Retailers are more in the real estate industry than people think. So we really put our homework in that as well to make sure the retailer is happy with what we’re showing them.”

Morrison prefers that Active D’Lites be displayed in several store locations. “This will sit in a retail store first in the diet/nutrition aisle – that’s where we feel we have a competitive advantage,” Morrison emphasizes. “From there, we certainly should be in the supplement aisle – where all the probiotic supplements are – and also the cosmetic aisle. A lot of women shop in cosmetics, and women love chocolate.”

He also points out the ice cream bars will be in the frozen food section and suggests that the individually wrapped bites in seven different flavors be displayed at the front counter for impulse buying. “These bites are available in a seven-pack for a one-week supply and a 30-pack for a one-month supply that also features a gravity feed tray for individual sale at the register,” Morrison says. “It’s an inexpensive way to try the brand. In the main grocery aisle where chocolate is, that’s probably the last place those particular buyers are looking for these.”

Active D’Lites products will appear in different areas of major retailers as their schematic plans allow. “There’s a pretty systematic madness to how we’re going to the marketplace with this whole brand,” Morrison explains. “I needed to wait for this non-GMO-version package, and now that it is completed, we have a busy 2013 planned for presentations.”

He expects major food and drug chains to express interest in carrying Active D’Lites and has already cut deals with some of them. CVS Pharmacy plans to carry six to eight SKUS of Active D’Lites in March, Morrison asserts. The chocolate-coated vanilla SKU of the probiotic ice cream bars are scheduled to be carried at Sam’s Club stores on a national basis beginning in 2013. Associated Food Stores currently carry all the Active D’Lites ice cream SKUs. In February, Kroger is expected to begin carrying the ice cream bars and in May the chocolate bars.

Once all the different flavors of ice cream and chocolate bars and their new packaging are finalized and on the market, Morrison plans to work on the shakes he is selling in their old packaging on the company’s website. “People have to take them every day, so you have to give the consumer enough choices so they don’t get sick of taking the same old things,” Morrison explains. “The bites are competitively priced with supplements on a per-dosage serving and are formulated using DuPont’s HOWARU RESTORE probiotic combinations.”

Morrison has arranged for some of the probiotics to be provided exclusively for Active D’Lites and is having them manufactured by third-party suppliers.

Active D’Lites has an exclusive partnership with DuPont, and the company uses their award-winning HOWARU probiotics for sugar-free and no-sugar-added chocolate products. “These are some of the most clinically studied strains today,” he says. “We are proud to be partnered with them and know that as consumers gain knowledge in probiotics, they will appreciate and trust our relationships.”